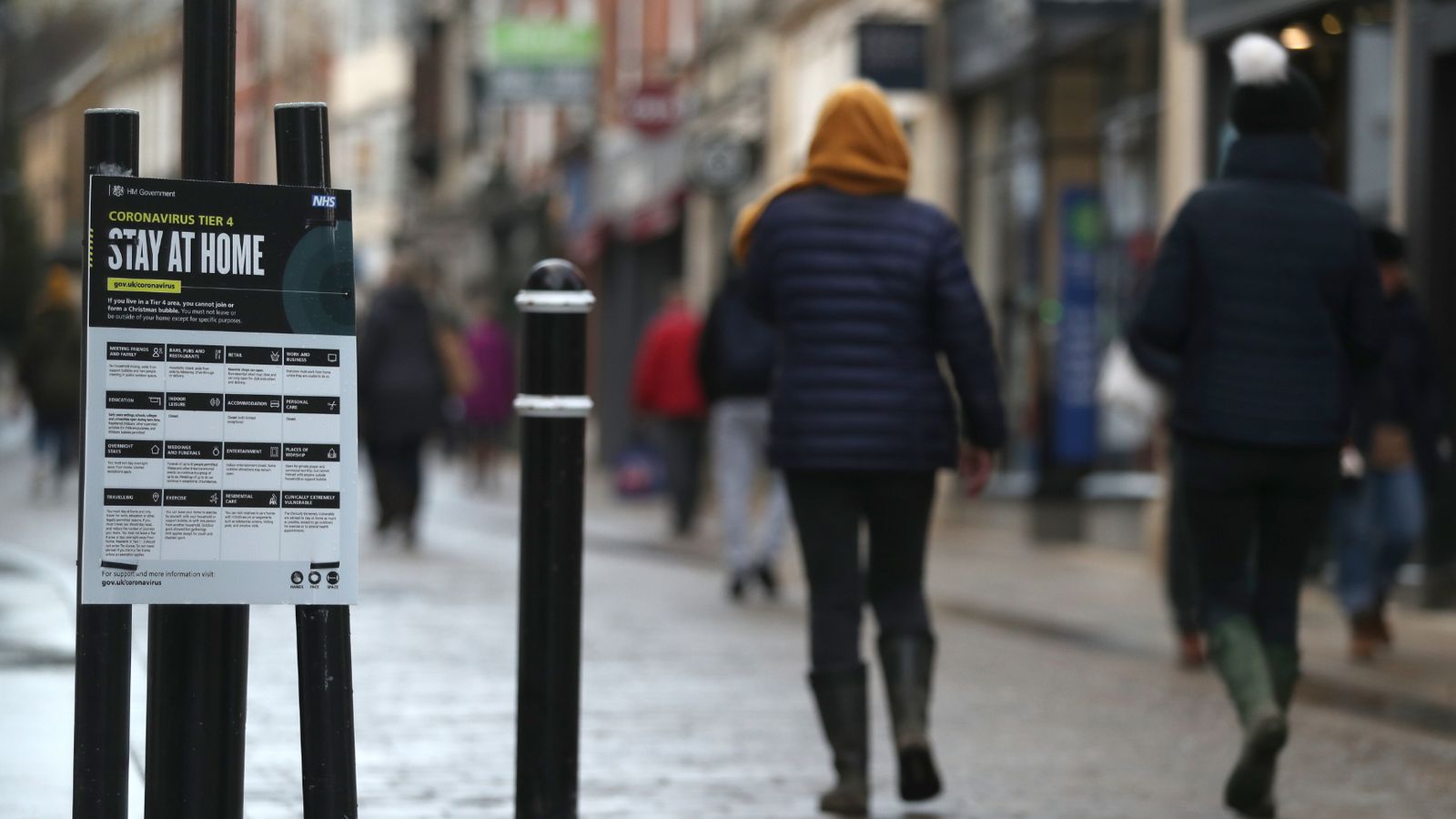 England’s economy will be unlocked gradually after the hoped-for return of schools at the start of March, the vaccines minister has told Sky News.

Nadhim Zahawi gave an insight into what Prime Minister Boris Johnson’s promised roadmap out of lockdown, earmarked to be announced on 22 February, will look like.

He confirmed the government intends to start reopening schools in England on 8 March, to allow immunity against COVID-19 to build up among the top four groups prioritised for a jab.

And in a suggestion the government wants to get the economy moving as soon as possible, he added more restrictions could then be lifted.

“Mid-February, if you add another three weeks to that when the vaccine protection really does begin to kick in, you’re at the first week of March,” he said on Thursday.

“So that’s when we will begin to first of all open schools and then begin a gradual reopening of the economy, if we continue to see good data.”

He added lockdown being eased is “predicated on really high quality data” of hospitalisation rates coming down and the falling of deaths, which he added “still remain far too high” and are at a “grim” level.

Image: Schools could open from 8 March in England

It comes as The Daily Telegraph reported Chancellor Rishi Sunak is worried scientists are shifting their advice on when lockdown should end.

The paper quoted one source who said: “Rishi is concerned that the scientists have been moving the goalposts in recent weeks. It’s no longer just about hospitalisations and protecting the NHS but cases and case numbers.

“Now the target seems to be that we need to keep cases down overall, which wasn’t the original aim of the lockdown… The talk has switched to becoming COVID-free.”

Steve Baker, deputy chair of the COVID Recovery Group – a lobbying effort by Tory backbenchers against restrictions they deem too tough – also responded to the report by calling Mr Sunak “potentially our best chancellor ever”.

Tory backbenchers have begun raising fresh concerns after Nicola Sturgeon announced schools in Scotland could return from 22 February – triggering questions about why the country is moving faster than England.

Image: The chancellor is facing calls from some to push for the economy to open soon

Marcus Fysh, a Conservative MP, said Mr Sunak’s reported concerns were “quite right”, adding: “As soon as vulnerable groups have been vaccinated and their immunity has spun up (14 days) we must open the economy completely and return to normal.”

Another senior Tory MP also told Sky News: “We can’t wait to be COVID free – for the vast majority of the population who aren’t badly affected by it (if that is still the case with these new variants) we have to start on the road back to normal.”

Several ministers have privately expressed concerns that some decisions are overly cautious at the moment.

And they seemed worried the cabinet so-called “doves” – those in favour of tougher restrictions – like Health Secretary Matt Hancock and Cabinet Office minister Michael Gove, are a bit too dominant in decision-making.

Prime Minister Boris Johnson’s spokesman confirmed he is still hopeful of vaccinating all those in priority groups one to nine by the end of spring – but refused to define specifically when that is.

Labour leader Sir Keir Starmer said tightening up the government’s hotel quarantine plan was essential for protecting the country from new variants – even though it might carry a heavier economic impact.

He told journalists on a visit to a supermarket pharmacy vaccination centre in Herefordshire: “Of course tough quarantine measures have an [economic] impact and in a sense nobody wants that.

Image: Sir Keir said the risk is ‘huge’ if border restrictions are not tightened

“But if a variant gets through that isn’t subject to the vaccine, we are going to be back to square one and that will have months of impact on the economy, huge damage to the economy.

“So the risk is huge if we don’t secure our borders and I think most people would say, ‘For heaven’s sake, now we’ve got the vaccine being rolled out, don’t put that at risk’.”

Mr Johnson’s spokesman confirmed details will be fleshed out by Health Secretary Matt Hancock next week.

It comes after a further 1,322 people died within 28 days of testing positive for coronavirus and 19,202 more people tested positive.

Just over 10 million people have also now had their first dose of a COVID-19 shot.

Mr Zahawi also said vaccine manufacturers are already planning to tweak their jabs to be more effective at tackling variants, of which there are around 4,000 worldwide.