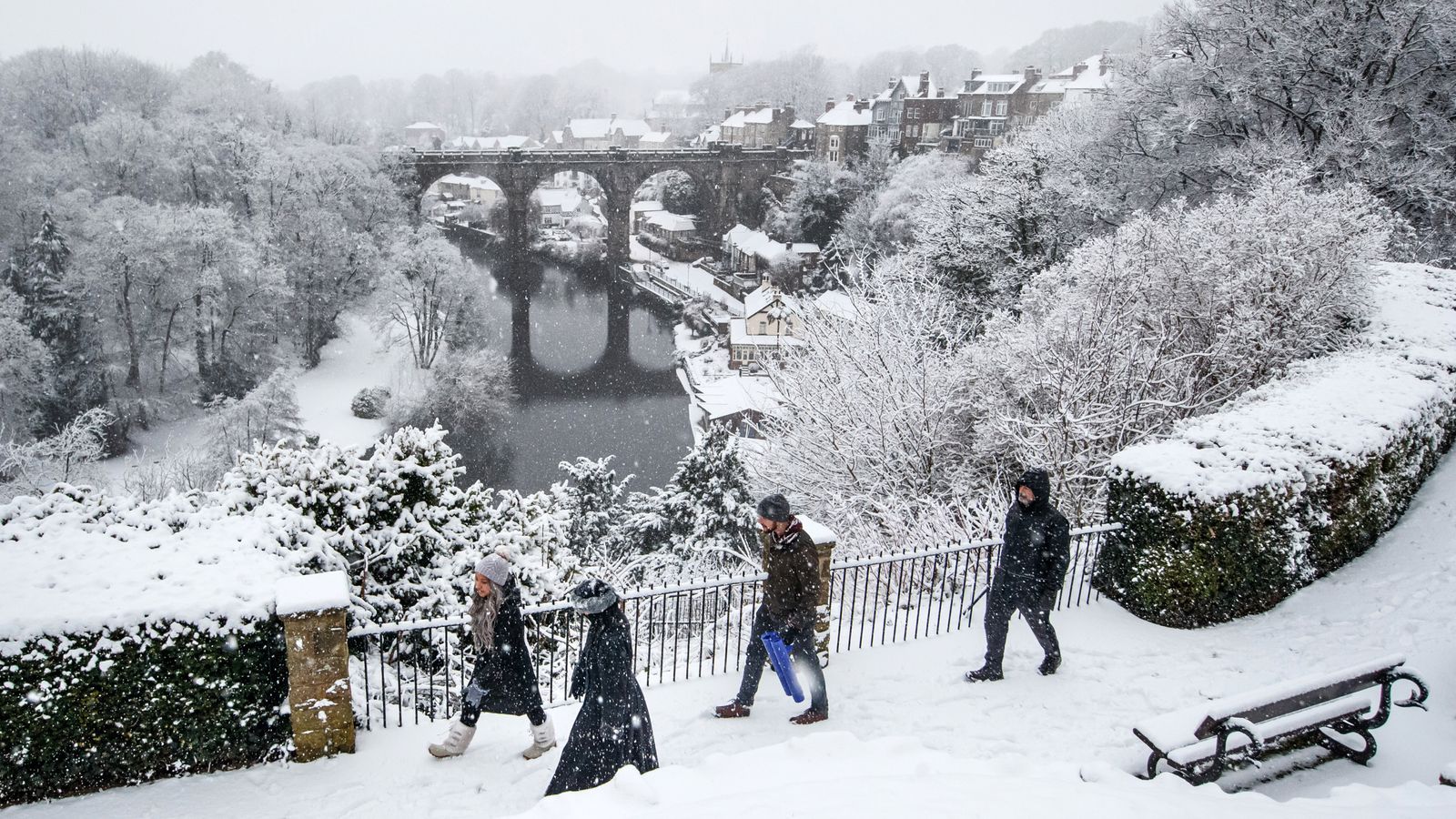 Large swathes of the UK will see a return to biting cold weather over the next few days, with heavy snowfall and a month’s worth of rain forecast for parts of England and Scotland.

Temperatures could drop by about 10C to just above freezing between Thursday and Monday across large parts of England.

Yet it may feel as cold as -5C across some areas of the UK from Sunday, with a band of cold air forecast to move in from the East, remaining in place for the early part of next week and keeping temperatures hovering around freezing.

Weather warnings for snow are in place for parts of Scotland, alongside further rainfall warnings for the North East of England and Northern Ireland.

A more severe amber snow warning is also in place for much of Scotland until 6am on Saturday, with forecasters predicting as much as 50cm snowfall in the highest areas between now and tomorrow evening.

Disruption to travel and utilities are likely, with the risk of communities being cut off.

There are also yellow warnings for snow, ice and rain in the East of England and Scotland on Saturday.

Further yellow weather warnings on Sunday cover much of Scotland and the east coast of England down as far as parts of the southern coast warning of the risk of some snow and ice into Monday.

Up to 80mm of rain is expected to have fallen in isolated parts of the North East of England between Tuesday evening and Saturday lunchtime – almost one-and-a-half times the volume usually expected in the region during the whole month of February.

It comes as the first snowdrops of the season have begun to emerge, often seen as the start of spring.

Met Office spokeswoman Nicola Maxey said: “We could see a drop of about 10C in widely expected daytime temperatures going into the weekend and next week.”

Sky’s weather producer Joanna Robinson said: “The cold air currently across Scotland will bring further snow there over the next few days. The Met Office has issued an amber snow warning for areas north of the Central Belt, where up to half a metre of snow is possible on the hills by Saturday.

“That’s on top of the snow seen in recent days, with depths reported to be around 40cm in Braemar and Crathie already. This is likely to be a significant and disruptive snow event for the Grampians, with blizzards and drifting snow.”

She went on: “Over the weekend, the cold air takes over the rest of the UK, with a raw easterly wind developing.

“Snow showers will move in off the North Sea to affect eastern parts, but more disruptive snow is possible for East Anglia and the South East on Saturday night and Sunday.

“There’s fairly high confidence that the cold conditions will continue early next week, with further snow showers in the east. It will feel bitterly cold in the wind.”

The Environment Agency currently has 38 of its second-most-severe flood warnings in place, along sections of river including the Thames, the Severn, and the Ouse, meaning flooding is expected.

There are also 133 less-severe flood alerts in place, across almost every region of England, meaning flooding is possible.

COVID: People getting infected twice may be ‘far more common than we imagined’, doctor says