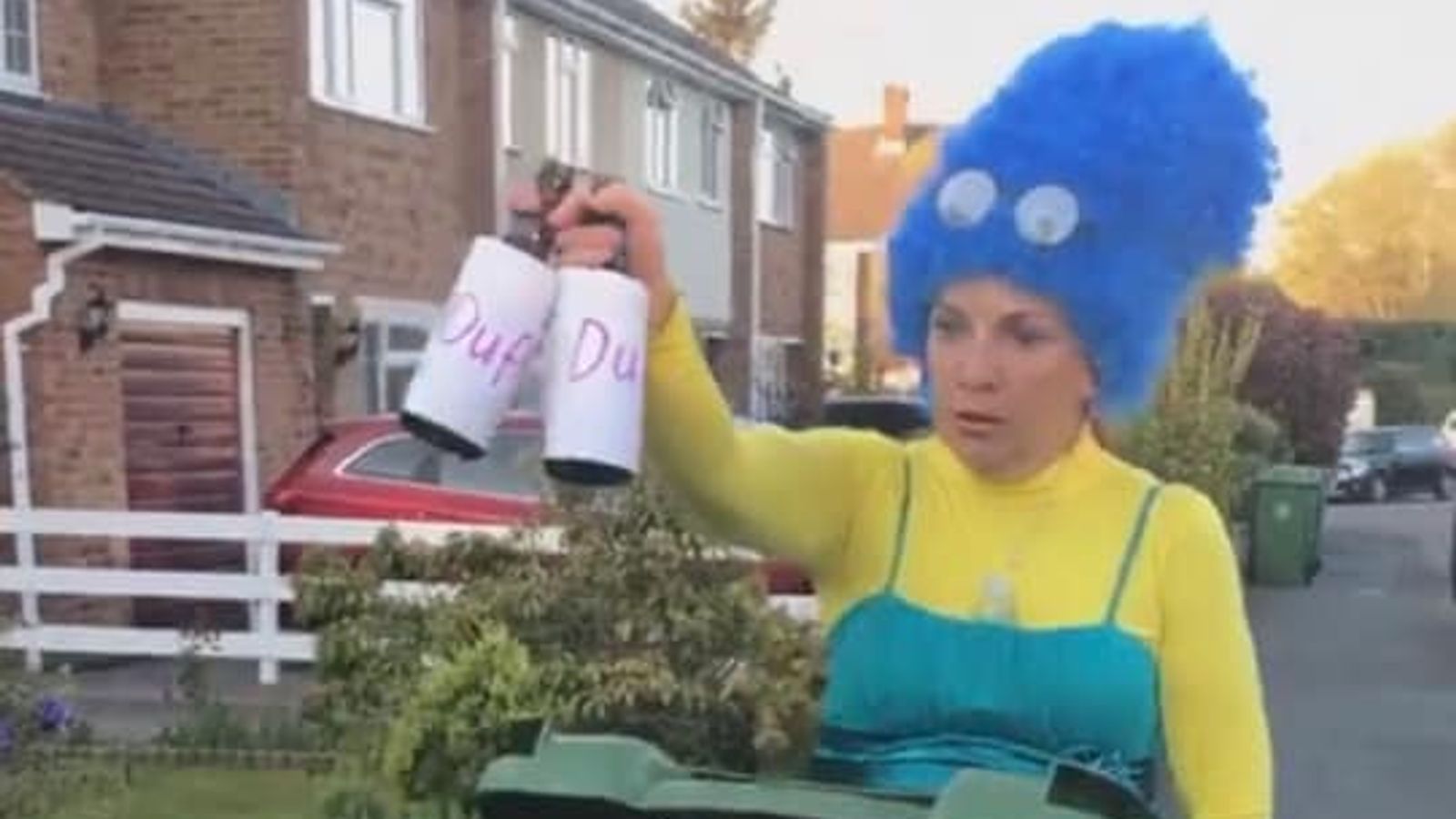 The strangeness of lockdown has had many of us looking forward to the simplest of things: going for walks, cooking dinner at home or a video call with friends.

For Andrea Belcher, from Surrey, it’s her weekly venture out of the house to put the bins out that has kept her spirits up.

Every week since April last year, she has been donning an elaborate fancy dress costume for the trip – transforming into characters including Marge Simpson, Charlie Chaplin and Darth Vader – and sharing funny videos on social media.

It all started off when star Amanda Holden shared a photo of herself putting the bins out in a ball gown.

“A couple of my friends were just chatting about it… so we said ‘come on, let’s all put our bins out in our ballgowns!'” Mrs Belcher told Sky News.

“I thought I was too embarrassed so one dark evening, as soon as everybody I knew was in, I put my bin out in a black, velvet off-the-shoulder ballgown.”

As she “sheepishly” took the bin out, her daughter Evie filmed it and the whole family had laughed – but it seemed to go down well.

The next week she found a Marge Simpson outfit in her dressing up box, and in the following weeks she dressed as Wilma Flintstone and a member of Abba, sharing her exploits on social media.

Before long, people started asking “what are you going to do next week?” and offering up their own fancy dress items.

What started as short video clips quickly turned into a “full on production”, with her daughter Evie adding filters and special effects on TikTok.

The Surrey mum’s zany outfits have also included Olaf from Frozen, Dorothy from the Wizard of Oz (with her dog playing Toto) and a burglar (which involved Mrs Belcher pretending to nick a bin).

One week, a friend lent her an inflatable T-rex costume and she walked down the path to the Jurassic Park theme tune.

“I couldn’t see a thing! And the head got a little bit stuck,” she said, laughing.

Image: One of the outfits included an inflatable T-rex costume

Explaining why she has kept up the videos, Mrs Belcher said it is because “everything is a bit miserable at the moment”.

Plus, the local community’s Facebook group said it helps remind people which bin is going out each week!

It’s also been a helpful hobby for Mrs Belcher, who said things have been “tough” since the pub she owns with her husband – the Horse and Groom in Chobham – has been closed once again during lockdown.

While they have been delivering their own gin to locals during lockdown, the opening and reopening of pubs and the restricted service they have been allowed to give during the pandemic has been hard.

Image: The family dog joined in one week to play Toto

For now, Mrs Belcher is thinking ahead to what costumes she’ll be doing next. She plans to continue for another 10 weeks, so she will have done it for a year.

So what will be her grand finale?

One idea is to promote her pub by dressing as the Horse and Groom – wearing a pantomime horse head, and with her husband Rob playing the groom.

Or, she is thinking of getting her local bin men involved to “take her away” on the last week.

If we are to judge by her outfits so far, we know it will be hugely fun.