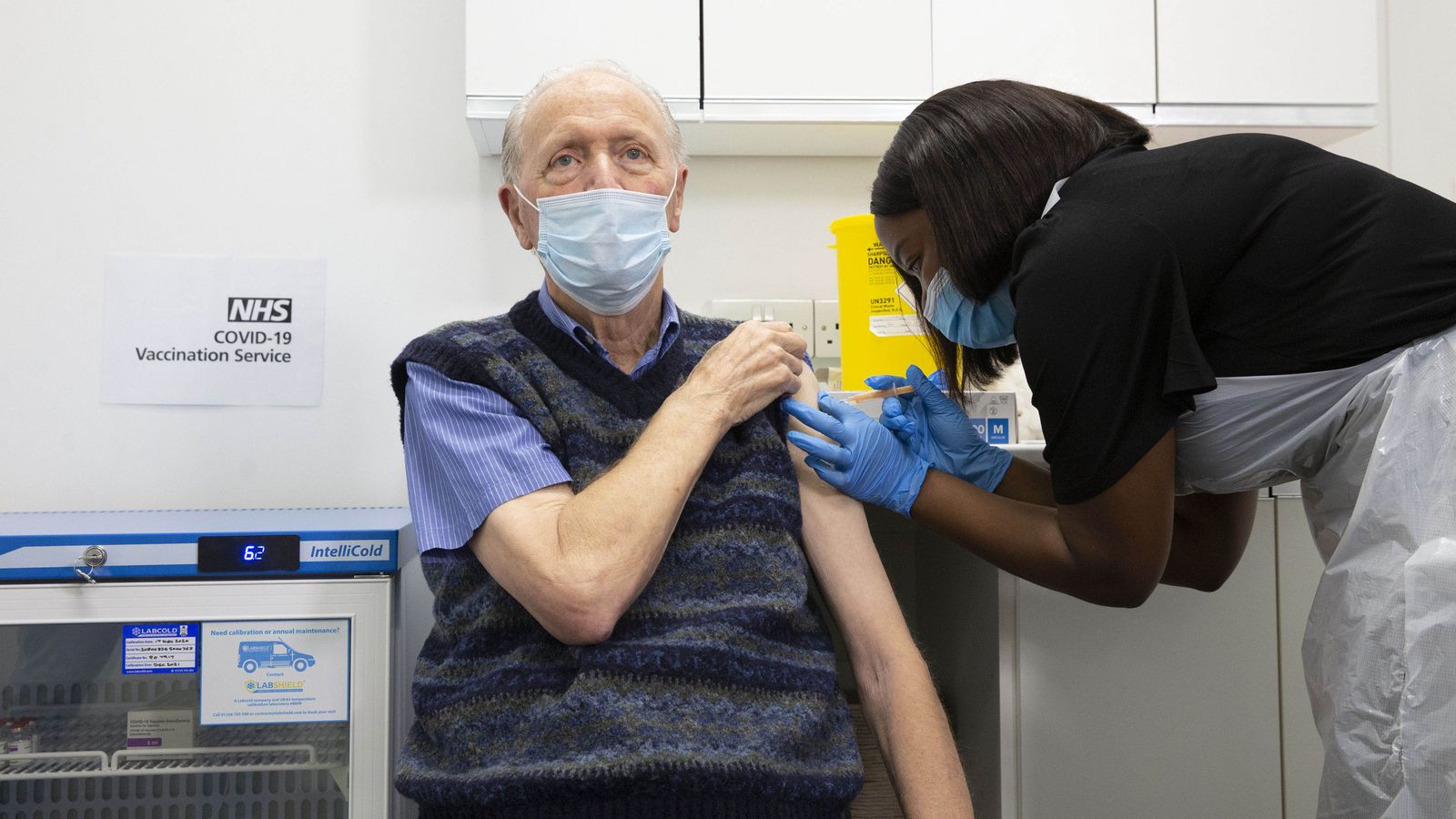 People aged 70 and over in England who have not yet had a coronavirus vaccine are being urged to book an appointment with the NHS to get a jab.

Health Secretary Matt Hancock announced the policy is changing to make sure no-one falls through the cracks as the drive to inoculate against COVID-19 continues.

He also urged everyone to check in with grandparents, relatives and friends who are over 70 years old to make sure they book an appointment “as soon as possible, so they can be protected against this awful virus”.

It comes as the race intensifies for all those in the top four priority groups to get their first jab by 15 February before attention turns to rolling the vaccine out to the other five priority groups, reaching all over-50s by May.

Another 333 people were also reported to have died within 28 days of testing positive for coronavirus on Monday, taking the total number of COVID-related fatalities since the pandemic began to 112,798.

Previously, people were told not to get in touch with the NHS to ask for a vaccine appointment and instead wait until they were contacted to avoid overwhelming the health service.

But now anyone aged 70 or over who has not been contacted is being urged to come forward and use the online booking service.

Image: More than 12 million people in the UK have had a first dose of a COVID vaccine

The age group is particularly important to reach given 83% of all people who have died with coronavirus are over 70, according to England’s chief medical officer Professor Chris Whitty.

Anyone unable to book through the NHS website can call 119 free of charge, which is open from 7am-11pm seven days a week.

Mr Hancock revealed the government expected vaccine take-up to be around 75%, but said it is going “significantly better than we hoped for”, with 91% of over-80s having had a jab and 95% among those aged 75-79.

Of residents at eligible adult care homes, 93% have also had their first vaccine.

First COVID vaccine dose given to 91% of over-80s

“We’re not going to rest until all those who are vulnerable have been protected,” the health secretary added, stressing that there are still 29,326 people in hospital with coronavirus across the UK – more than the April and November peaks.

“We’re turning a corner in our battle against coronavirus,” he added.

Image: Mr Hancock said vaccine take-up is ‘significantly better than we hoped for’

Dr Nikki Kanani, medical director of primary care for NHS England, also said at a Downing Street news conference on Monday: “We all have a role to play to make sure that no-one gets left behind.

“So if we’ve not been in contact with you and you’re in the [top four] priority groups, please get in touch with us.”

Ministers have been reluctant to spell out what the hoped-for fall in deaths means for lifting restrictions.

But Prime Minister Boris Johnson has promised to set out a roadmap out of lockdown in the week of 22 February.

He has already announced schools may be able to re-open in England from 8 March, when the benefits of immunisation should have begun to take effect, though a phased re-opening of schools is planned this month in Wales and Scotland.

England’s deputy chief medical officer Professor Jonathan Van-Tam has meanwhile urged Britons to ignore “scary” headlines about the South African coronavirus variant and get whatever vaccine they are offered.