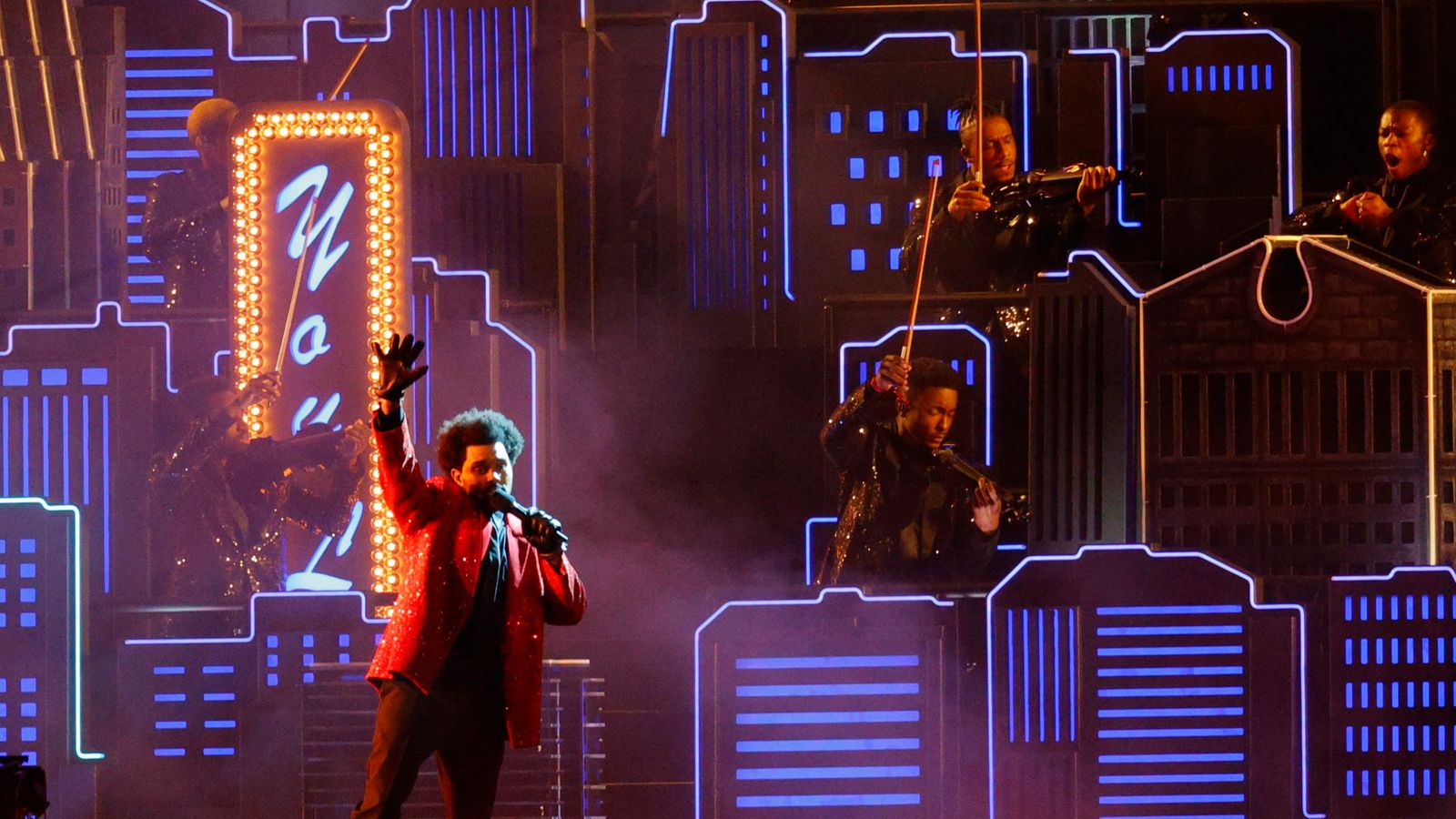 There might have been a limited attendance due to coronavirus restrictions, but The Weeknd adapted to give a glittering Super Bowl half-time show – while Miley Cyrus was joined by veteran stars for her performance.

The 65,890-capacity Raymond James Stadium in Florida was filled with just 25,000 fans – including 7,500 vaccinated healthcare workers – while the rest of the audience was made of cut-outs.

But The Weeknd had a small army of lookalikes, fireworks and a full moon on his side to create a spectacular show for the coveted half-time slot, which in previous years has been taken on by stars including Katy Perry, Lady Gaga, Justin Timberlake and, last year, the duo of Jennifer Lopez and Shakira.

Image: Despite a limited crowd due to COVID-19, the star put on a big show Image: Miley Cyrus brought on stars including Billy Idol for her pre-show performance. Pic: Doug Benc/USA TODAY Sports/ Reuters

The Canadian star performed hits including Starboy, Can’t Feel My Face, I Feel It Coming and Blinding Lights.

The 28-year-old performed White Wedding alongside Idol and I Hate Myself For Loving You with Jett, as well as some of her own biggest hits, including Party In The USA, We Can’t Stop, Edge Of Midnight and Wrecking Ball.

After an emotional performance of Wrecking Ball – which fans have speculated was written about her ex-husband, Liam Hemsworth – Cyrus told the audience: “Singing that song, Wrecking Ball, about feeling completely broken and shattered, I know that one of the main reasons I’ve missed live music so much is seeing all of you out here relating to me, relating to my lyrics.

“Everyone’s suffering is different, even everyone’s threshold of pain. I like to think I’ve got a pretty high tolerance. I wear a lot of glitter and I wear a lot of armour and I also wear my heart on my sleeve, but it gets broken a lot.”

It is one of the year’s biggest cultural events in the US and the 2021 show did not disappoint on the Hollywood star power front, with blockbuster film trailers and celebrity-filled adverts appearing during commercial breaks.

Matthew McConaughey, Will Ferrell, Awkwafina, Drake and Paul Rudd all appeared in ads, with a 30-second slot reportedly costing about $5.5 million (£4 million), while Brad Pitt voiced a teaser for the game.

But not all celebrities got behind the show.

Kaepernick was the first in a series of National Football League (NFL) stars to kneel during the US national anthem before matches, with players saying they wanted to draw attention to racism and police brutality. He said he was frozen out due to his activism.

In 2019, Rihanna confirmed in an interview that she had turned down that year’s Super Bowl event to show support.