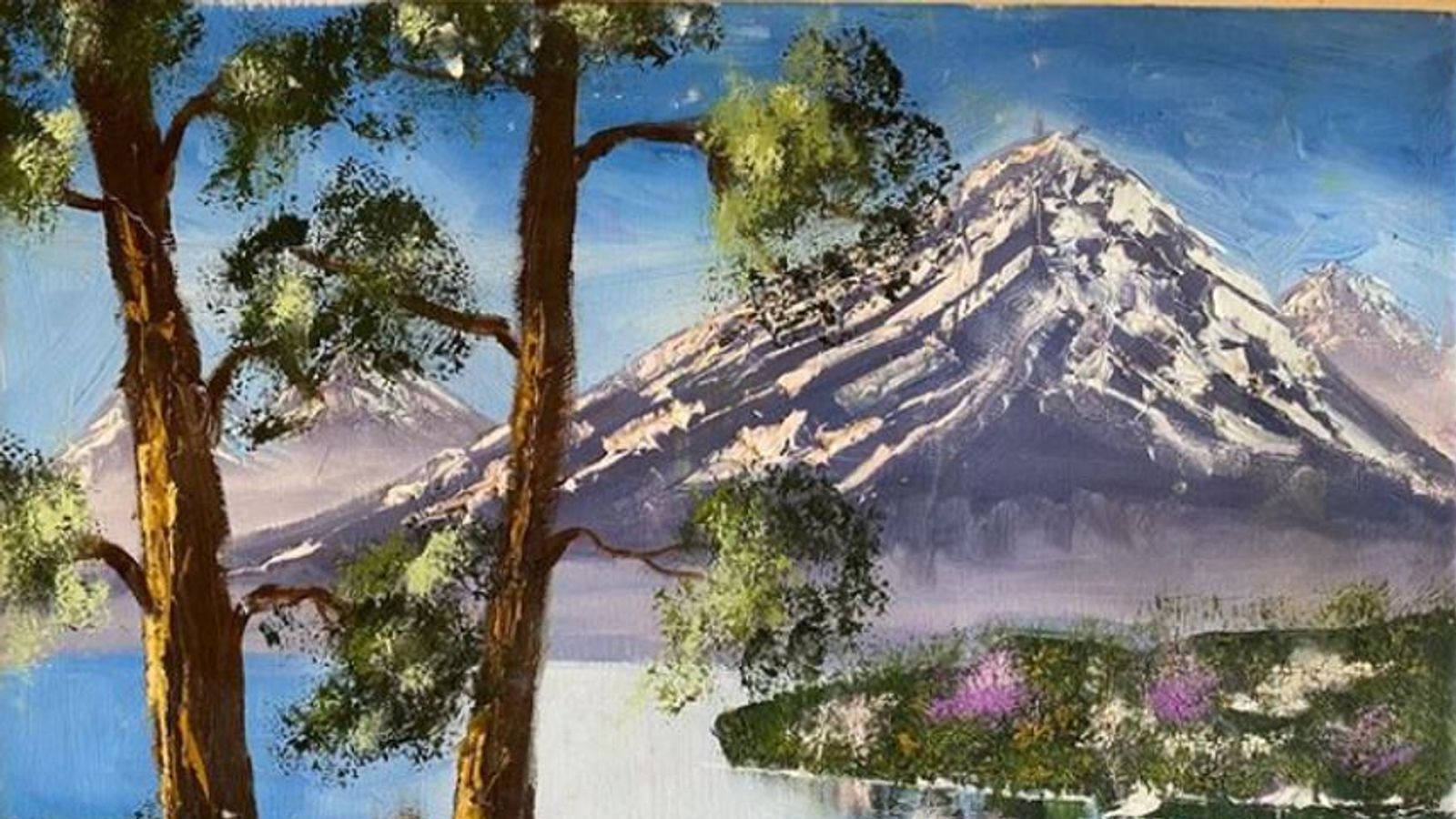 Kim Kardashian has hit out at those questioning her eldest daughter’s artistic talents, after sharing what she called her “baby’s masterpiece” with the world.

The reality star had posted a photo of an impressive blue-hued oil landscape – showing a lake, two trees and a snowy mountain – on her Instagram Story earlier in the week.

She wrote: “Shout out to all the proud moms out there that love to show their baby’s masterpieces”.

Image: North with the painting in question. Pic: Instagram/@KimKardashian

Calling the seven-year-old “my little artist North”, she also posted a picture of North holding up the canvas and smiling.

However, fans were quick to question whether North had painted the picture herself, with one asking: “Please tell us more about the painting, I’m intrigued, is North the new Pablo Picasso?”

Another wrote: “I’m supposed to be at work, but I can’t stop thinking about how North West did not paint this.”

Others zoomed in on the signature in the bottom right hand corner of the painting, speculating that it had been Photoshopped and so was proof it hadn’t been done by North.

Kardashian, 40, who was unimpressed by those doubting North’s talent, has now defended her daughter, warning her detractors: “Don’t play with me when it comes to my children!!!”

In a multi-page Instagram Story, Kardashian put together a collection of photos, social media posts and media reports on her daughter’s artwork, along with a message re-iterating that her daughter was entirely responsible for the work.

She wrote: “My daughter and her best friend have been taking a serious oil painting class where their talents and creativity are being encouraged and nurtured.

“North worked incredibly hard on her painting, which took several weeks to complete. As a proud mom, I wanted to share her work with everyone.

Image: There’s no doubt that Kim’s a proud mum in no mood for strong criticism. Pic: Instagram/@KimKardashian

“I’m seeing op-ed pieces in the media and social media from grown adults breaking down whether or not my child actually painted this!

“How dare you see children doing awesome things and then try to accuse them of NOT being awesome!?!?!

“Please stop embarrassing yourselves with the negativity and allow every child to be GREAT!!!

She also shared a photo and video of a Hermes handbag which North painted for her as a baby and gave her for her first Mother’s Day present.

Calling the hand-printed canvas bag a “beautiful masterpiece” she said she knew then “she’d be such a great artist”.

Meanwhile the mother of North’s best friend Ryan, Tracy Romulus, also defended the work, as did the daughter of North’s art teacher, who said she herself had completed similar pictures as a child.

Camryn Frederickson used TikTok to tell fans that her mother – artist Celeste Astor Frederickson -taught North how to paint the picture, and that everyone in her class “starts with the exact same painting when they’re starting out”.

Following the row over North’s talents, American artist Bob Ross – who was the US’s answer to Tony Hart – began to trend on Twitter as people compared his work to that of North West.