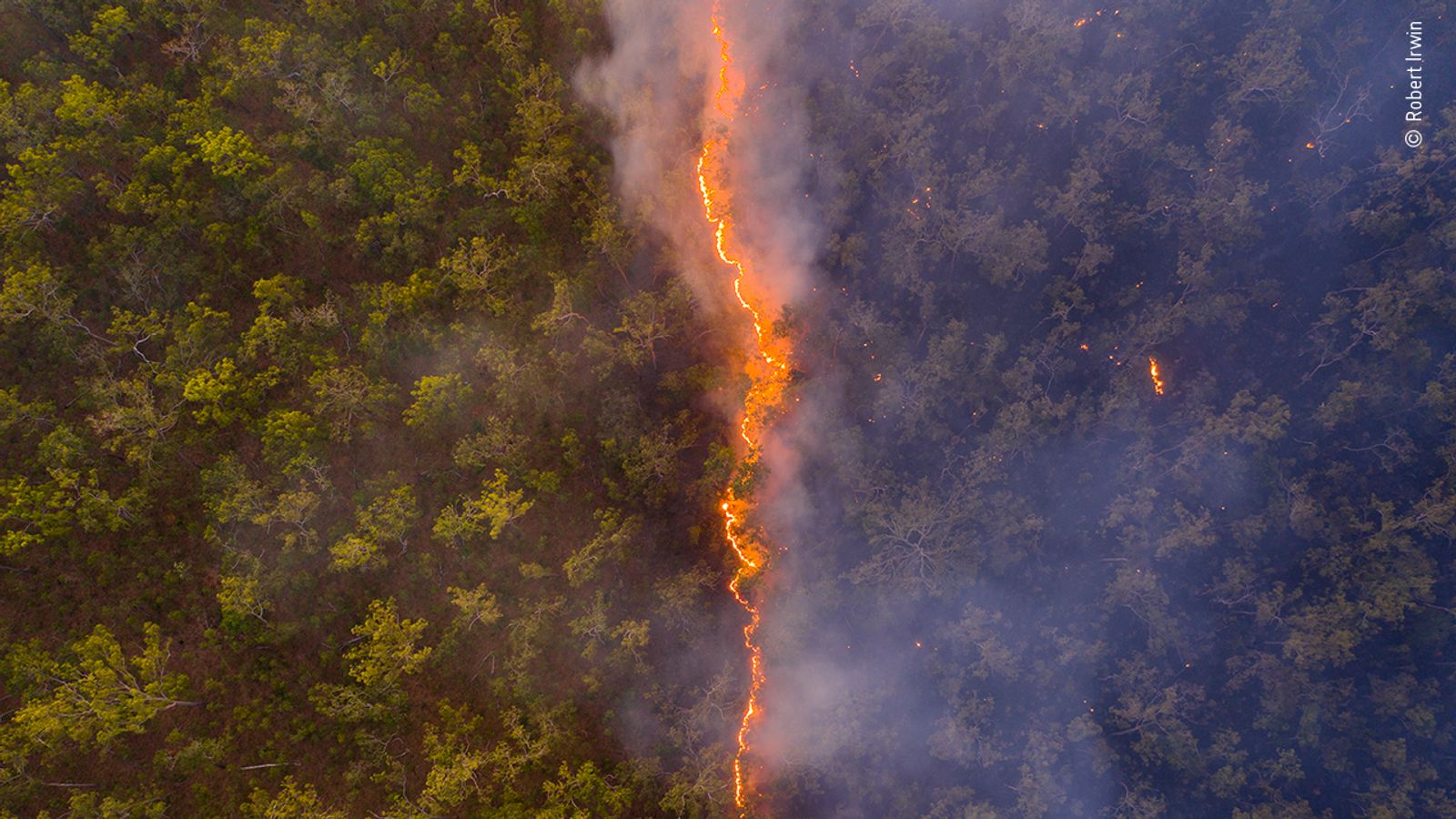 A dramatic drone shot highlighting the devastation of a bushfire in Australia, taken by TV environmentalist Steve Irwin’s son, has been named the winner of this year’s Wildlife Photographer Of The Year People’s Choice Award.

Robert Irwin’s photograph shows a fire line leaving a trail of destruction through woodland near the border of the Steve Irwin Wildlife Reserve in Cape York, Queensland.

More than 55,000 votes from all over the world were cast in the competition, which recognises a photograph chosen by the public each year as part of the Natural History Museum’s annual awards for wildlife imagery, with the other winners chosen by judges.

Image: Robert Irwin, mum Terri and sister Bindi unveiled a posthumous star for Steve Irwin on the Hollywood Walk of Fame in 2018

Robert, 17, said he took the image after spotting smoke on the horizon, but had to be quick as he only had a few minutes of battery left in his drone. In the short time he had, he managed to get the shot – showing pristine greenery on one side, the charred remains of the landscape on the other – in an area of high conservation value which is home to many endangered species.

The Australian nature photographer said he was “incredibly excited” to win the award.

“For me, nature photography is about telling a story to make a difference for the environment and our planet,” he said. “I feel it is particularly special for this image to be awarded, not only as a profound personal honour but also as a reminder of our effect on the natural world and our responsibility to care for it.”

Natural History Museum director Doug Gurr described the image, chosen as the winner by vote after making a shortlist of 25, as “stirring and symbolic”.

The Last Goodbye by Ami Vitale, from the US

This heartbreaking image shows rhino Sudan being comforted in the moments before he died at the Ol Pejeta Wildlife Conservancy in northern Kenya in 2018. Aged 45, he was the last northern white rhino left in the world.

Hare Ball by Andy Parkinson, from the UK

Andy Parkinson spent a long time in the cold, with winds of up to 60mph surging around him, watching the mountain hares near Tomatin in the Scottish Highlands. After five freezing weeks, he caught the perfect moment – a little female hare covered in a dusting of snow, curling her body into a perfect spherical shape.

Close Encounter by Guillermo Esteves, from the US

Moose are large, imposing animals – so the worried look on this dog’s face is probably a fair reflection of how most people would react when coming face to face with those antlers. Taken on the side of the road at the Antelope Flats in Grand Teton National Park, Wyoming, this image shows the large bull taking an interest in the canine visitor – luckily with the windscreen between them.

Only one is clearly visible, but this picture actually shows two Eurasian red squirrels finding shelter in a box set up by photographer Neil Anderson in a pine tree near his home in the Scottish Highlands. Using a wifi app on his phone, he was able take stills from the ground, leaving the squirrels to sleep in peace.

The five winning images will feature in the Wildlife Photographer Of The Year exhibition at the Natural History Museum, London, when the venue reopens as lockdown restrictions ease.

The overall winner of the competition was chosen in October 2020, with judges decribing Sergey Gorshkov’s incredible image of a Siberian tiger hugging a tree as a “remarkable sight”.