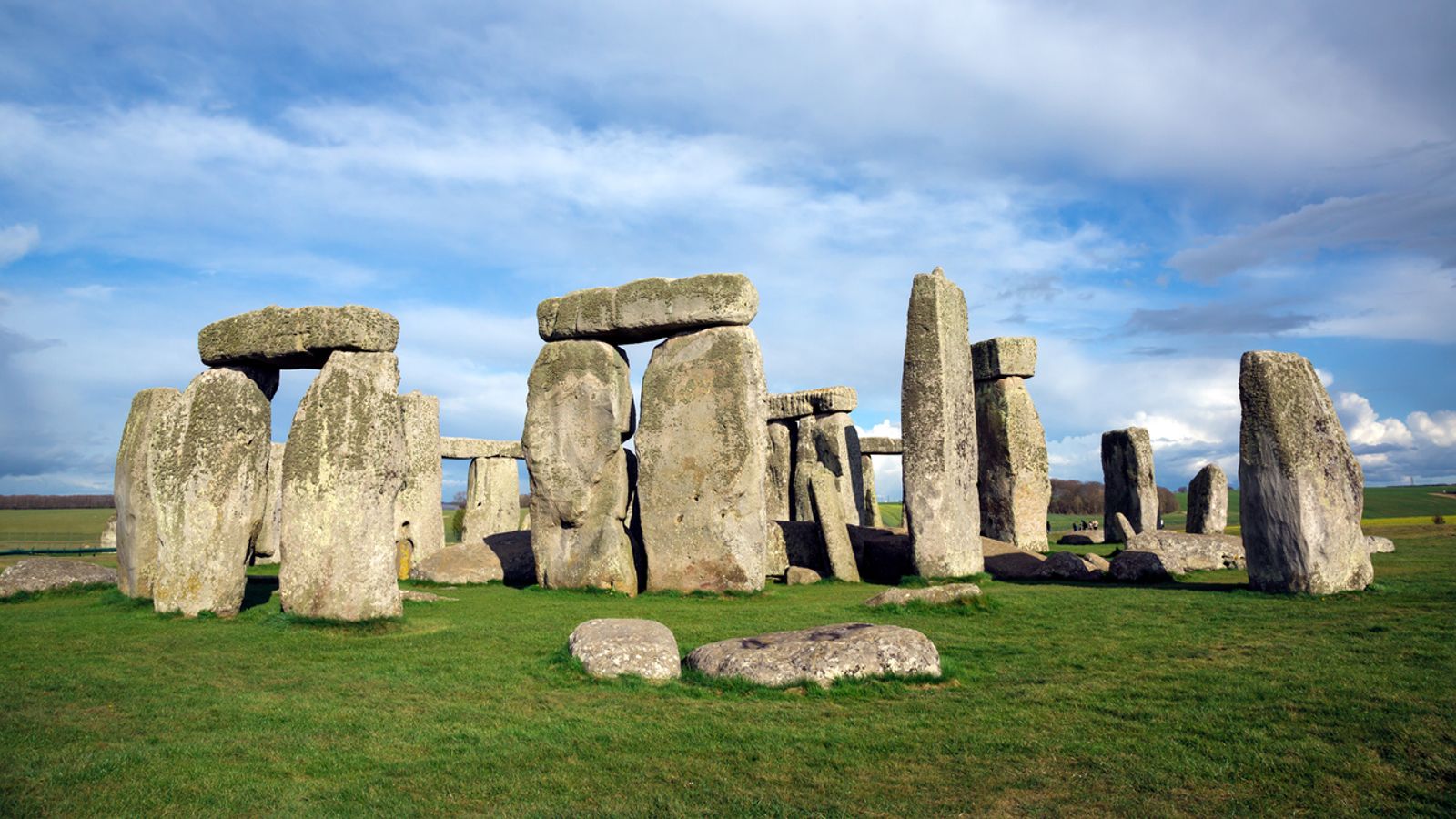 Archaeologists have uncovered the remains of an ancient stone circle in Wales which they believe could have been dismantled and rebuilt as Stonehenge.

The Welsh monument, named Waun Mawn, is set in the Preseli Hills in Pembrokeshire and is one of the biggest stone circles ever found in Britain.

The area is where the smaller “bluestones” found 175 miles away at Stonehenge on Salisbury Plain, Wiltshire, are known to have come from.

Image: Archaeologists believe the rocks of Stonehenge may have stood at this site in Wales

The team behind the discovery said there are key elements linking Stonehenge to the stone circle in Wales.

They suggest its bluestones could have been moved as the ancient people of the Preseli region migrated, even taking their monuments with them, as a sign of their ancestral identity, and re-erecting them at Stonehenge.

And it could explain why the bluestones, thought to be the first monoliths erected at Stonehenge, were brought from so far away, while most circles are constructed within a short distance of their quarries, the experts said.

Their discovery that the bluestones had been extracted before the first stage of Stonehenge was built in 3000 BC prompted the team to re-investigate the nearby Waun Mawn stones to see if it was the site of a stone circle supplied by the quarry and later moved.

Only four monoliths remain at the site, but an archaeological dig in 2018 revealed holes where stones would have stood, showing the remaining stones are part of a wider circle of 30 to 50 stones.

Image: The stone circle in Wales has been named Waun Mawn

And the scientific dating of charcoal and sediment from the holes reveal it was put up around 3400BC.

Findings of the discovery, published in the journal Antiquity, show significant links between Stonehenge and Waun Mawn.

The Welsh circle has a diameter of 360ft (110m), the same as the ditch that encloses Stonehenge, and both are aligned on the midsummer solstice sunrise.

Several of the monoliths at the World Heritage Site on Salisbury Plain are of the same rock type as those that still remain at the Welsh site.

Image: The site in Wales is 175 miles away from Stonehenge in Wiltshire

And one of the bluestones at Stonehenge has an unusual cross-section which matches one of the holes left at Waun Mawn, suggesting the monolith began its life as part of the stone circle in the Preseli Hills before being moved.

Waun Mawn is the third biggest stone circle in Britain and one of the earliest, and confirms that the region was an important and densely settled area in Neolithic times until 3000 BC, when activity seems to have ceased.

It was discovered during the making of the BBC programme Stonehenge: The Lost Circle Revealed.

Professor Parker Pearson said: “It’s as if they just vanished. Maybe most of the people migrated, taking their stones – their ancestral identities – with them.”

Analysis of the remains of people buried at Stonehenge at the time the bluestones were erected there would seem to back up the theory, as it shows some of them were from western Britain, possibly Wales.

With only a few of the Stonehenge stones directly linked to Waun Mawn, the archaeologists also believe monoliths from other stone circles could have been taken from Wales to form part of the new monument.

Professor Parker Pearson said: “With an estimated 80 bluestones put up on Salisbury Plain at Stonehenge and nearby Bluestonehenge, my guess is that Waun Mawn was not the only stone circle that contributed to Stonehenge.

“Maybe there are more in Preseli waiting to be found. Who knows? Someone will be lucky enough to find them.”