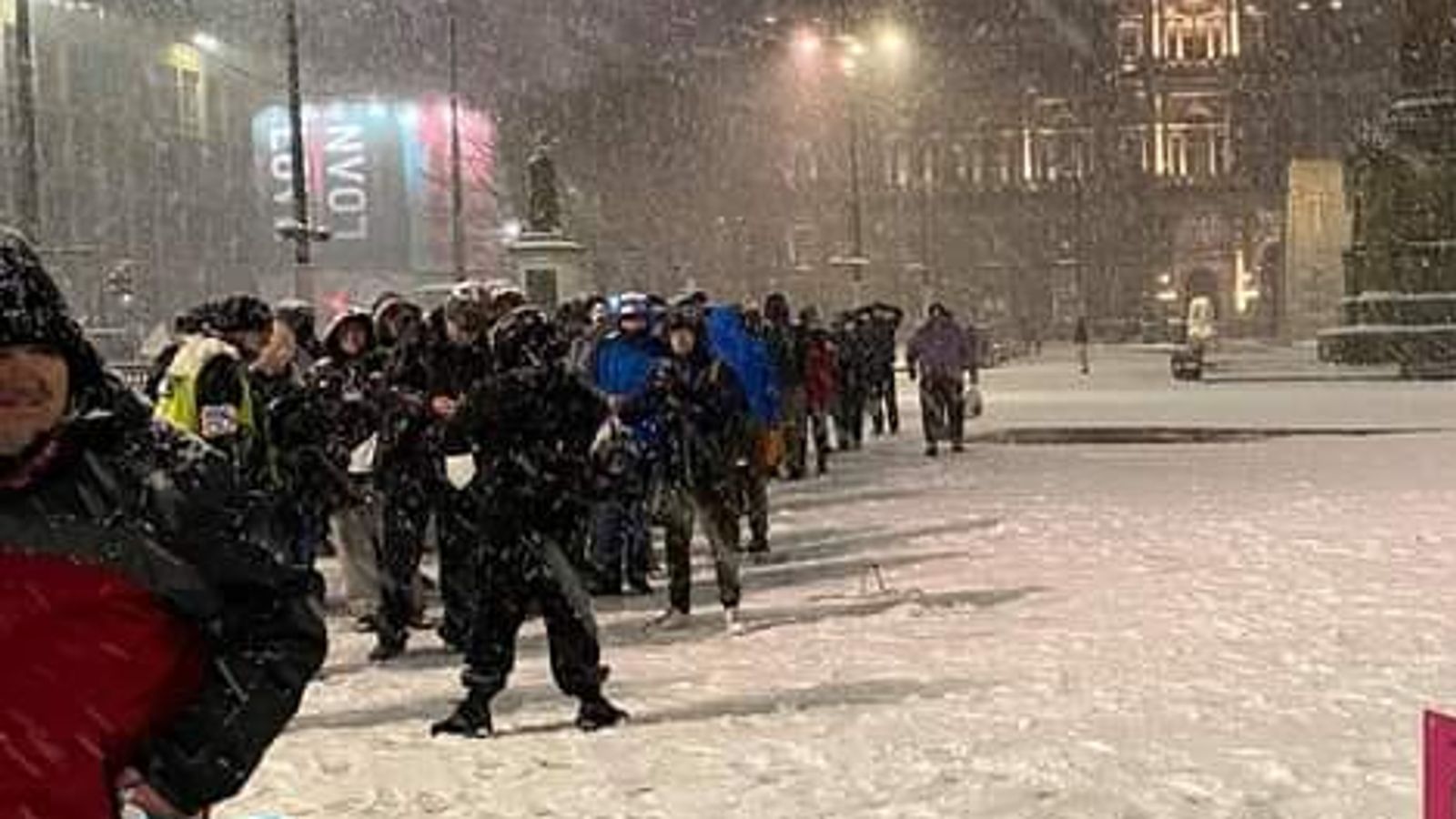 A photo of 200 homeless people queueing in freezing temperatures and snow for a soup kitchen in Glasgow has prompted an outpouring of anger.

One volunteer from the Kindness Homeless Street Team said “this has to end”, as the group experienced one of its busiest ever nights on Monday.

With temperatures plummeting as low as -6C, hundreds of people were forced to wait in line to receive a hot meal.

Graeme Weir, who works for the project, likened the scenes to those in an Eastern European country “decimated by years of Communist rule”.

He shared the image on Facebook, and said: “This makes me so angry. This has to end.

“I know some of these people personally and most of them are good people who have just hit a wee bump in the road.

“We as a civilised and caring nation need to step up.”

Glasweigian Laura McSorley, 37, started up Kindness Homeless Street Team as a small venture feed homeless people in 2019 – when she says she had just £5 in her pocket.

Demand increased dramatically when the first lockdown began last March, leading her team to move to large-scale operations, providing hot meals to those on the street four nights a week.

Alongside her 60 volunteers, Laura has handed out tens of thousands of meals. She has also helped 150 people in finding a home.

After the COVID-19 outbreak began, the Scottish government introduced emergency measures to move the vast majority of rough sleepers into temporary accommodation such as hotels and bed and breakfasts.

While rough sleeping is at a record low due to those measures, many charities are concerned that the funds are not addressing the multiple problems associated with homelessness.

According to Ms McSorley, some of the people who visit their soup kitchen on a daily basis are only receiving a small box of cereal and a piece of fruit from the government to last them the entire day.

Image: Homeless people line up while waiting to get food amid freezing weather in Glasgow. Pic: Kindness Homeless Street Team

The charity Crisis has warned that conditions in temporary accommodation are often squalid and poorly furnished, with some providing a kettle as the only kitchen appliance.

Commenting on the photos of homeless people queueing in the cold, Scottish Conservative leader Douglas Ross said it was “shocking” and “appalling” to see this is happening in Glasgow in this day and age.

“The SNP’s talk on tackling homelessness has been cheap,” he said.

“They have let homelessness continue to rise on their watch and their budget shamefully proposes cutting over £250 million from the Social Housing budget, which Shelter have rightfully described as a huge step backwards.”

The SNP, however, pointed to the role of the UK government’s welfare system in the homeless crisis.

And a Scottish government spokesperson said rough sleeping in Scotland was at a record low and insisted there was “no shortage in food provision for those supported by services in B&Bs and hotels or in rapid rehousing welcome centres”.

“It is absolutely essential that the UK government act now to make permanent the £20 uplift to Universal Credit and extend it to people on other benefits.

“Removing this support risks pushing a further 60,000 in Scotland people into poverty and removes vital support when it is needed.”

Anyone wishing to help the Kindness Homeless Street Team soup kitchen can donate items by clicking on this link.