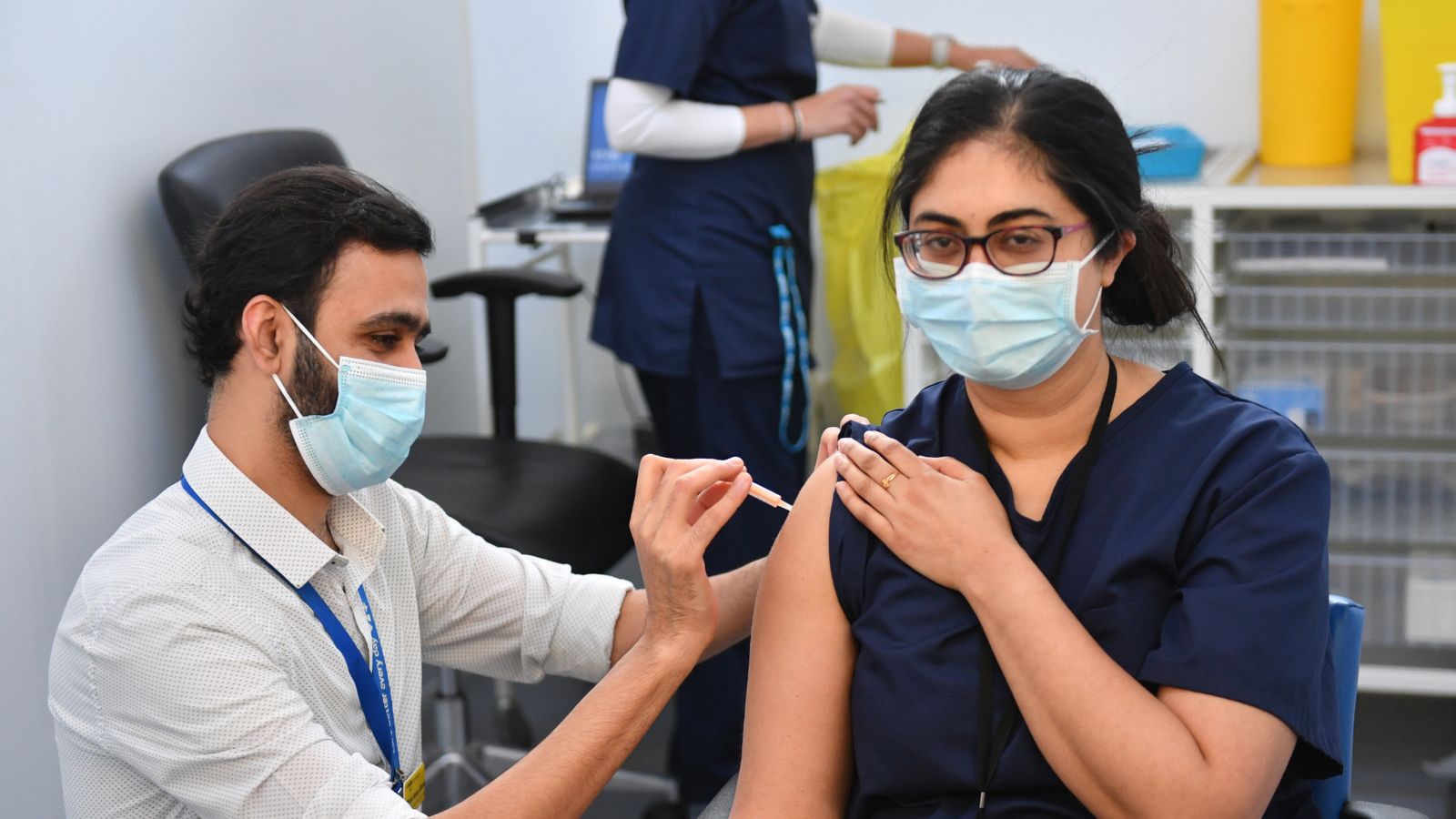 One dose of a COVID-19 vaccine gives 67% protection after three weeks, a leading epidemiologist has said.

Professor Tim Spector of King’s College London, who runs the ZOE COVID-19 surveillance app, said data collected from 50,000 users vaccinated with either the Pfizer or Oxford/AstraZeneca jab showed one dose gave 46% protection after two weeks, rising to 67% after three to six weeks.

The app uses information submitted by more than four million users across the world to predict and track coronavirus infections across the UK and other countries.

“We have now got about a third of a million people who have logged their first dose of the vaccine with us on the ZOE app,” Prof Spector told Sky’s Sophy Ridge on Sunday

“We are showing very low levels of side effects and we’ve showed that after three weeks we’re getting a 67% protection against the virus, so three times less risk than you’d be getting otherwise compared to an unprotected control.

“That is a better rate than people had thought just on a single jab so I think that, combined with the data we’re seeing, has given me a lot of reason to be optimistic that we are going to be in a much better place in two to four weeks’ time and can start to reduce some of these restrictions.”

Asked about the sample size, he said: “We have analysed around the first 50,000 people so it is a large sample and these are healthcare workers who are at high risk, so they are the ones you would see changes in most and we’re seeing a consistent fall, with no protection at all in the first two weeks… but after two weeks it drops to around 46% and after three to six weeks it is 67%, which is really great.

“If that was around the country, we would have really knocked this virus on the head.”

The figure was calculated using “large-scale, real-time data” from two control groups of healthcare workers – one group vaccinated and one not. The level of protection was measured against a PCR proven infection compared to a control group of same age and gender also reporting on the app.

Different studies suggest different effectiveness for one jab of the two vaccines currently on offer – the Pfizer/BioNTech and Oxford/AstraZeneca jabs.

According to Pfizer data from December 2020, the Pfizer-BioNTech vaccine is roughly 52% effective 12 days on from the first dose. This rises to 95% with a second jab.

And data from Israel’s vaccination programme suggests one jab could offer just 33% protection.

This was contradicted by a UK Joint Committee on Vaccination and Immunisation study which found one Pfizer jab to be 89% effective, rising to 92% with a second jab.

Meanwhile, according to a scientific paper in the Lancet from January, the Oxford/AstraZeneca jab offers protection of 64.1% 21 days after one dose and 70.4% after two doses.

On Wednesday, early results of the vast UK study on the impact of the Pfizer-BioNTech and Oxford-AstraZeneca vaccine rollout suggests that the level of protection from one jab was about 60% to 65%.

The results applied to vaccine recipients of all ages, and protection began after two weeks.

A draft has been sent to the government but on Wednesday Sir Patrick Vallance, the government’s chief scientific adviser, said he was not publishing its results yet because he wanted more data.

The figures, first reported in The Sun and confirmed by a Whitehall source, showed that one dose reduced the symptomatic infection risk by 65% in younger adults and 64% in over-80s.

Protection for those given two shots rose to between 79% and 84%, depending on age.