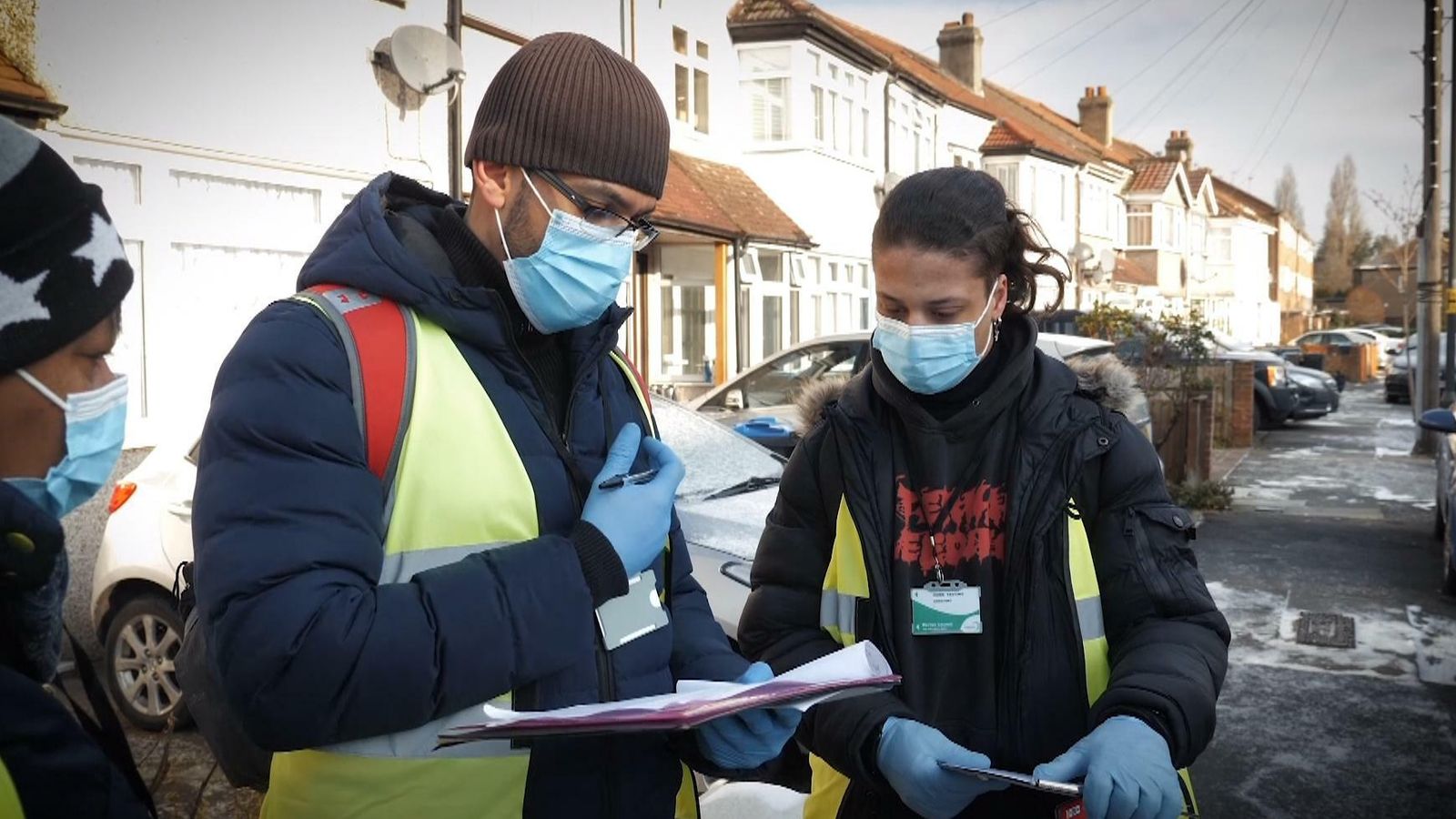 Plans are being prepared for nationwide surge testing across England as the COVID lockdown is eased, Sky News understands.

This is part of the next stage of moving out of the current restrictions and the move to extend asymptomatic testing is likely to be announced by the prime minister when he reveals his “roadmap” out of lockdown on Monday.

The plan is to send out hundreds of thousands of rapid lateral flow tests to people’s homes and workplaces to check people who don’t have symptoms to try and pick up coronavirus clusters before they form in the community.

Sky’s political correspondent Kate McCann said the aim is “to make sure all of us, when we are going about our daily business, can know that we are not passing on the virus to those around us”.

“This is going to be key as the cases in the community come down to make sure that when there are small numbers of cases in an area they can be isolated quickly and they don’t expand into clusters, because the one thing that the government knows it needs to make sure now is that this is the final lockdown – there are no further national lockdowns from here,” she said.

“So what you are going to start hearing about is those testing schemes – those may even include specific workplaces too further down the line to make sure that case numbers stay low when we move out of this next stage.”

The Times said there would be mass testing before some schools reopen next month, and the Department for Health and Social Care has not denied suggestions that rapid-result tests will be a big part of the return to normality.

The newspaper said that a scheme called ‘Are You Ready? Get Testing. Go’ would see the lateral flow tests being sent out every day, similar to the scheme being run by more than 70% of England’s local authorities.

It comes amid calls for the prime minister to be cautious with the easing of restrictions.

The NHS is likely to remain under pressure for at least another six weeks, Chris Hopson, chief executive of NHS Providers, which represents NHS trusts in England, has warned.

In a letter to Boris Johnson, he said case numbers were “still far too high” and the health service remained “at full stretch”, something he said trust leaders believed would continue for at least another six to eight weeks.

He said: “The evidence on COVID-19 cases, NHS capacity, progress with vaccinations and readiness to combat COVID-19 variants all show that it is much too early to start lifting restrictions.”

Mr Johnson has said he will look at the data this week on case numbers, hospital admissions, deaths and the impact of the vaccine rollout as he considers how to reduce restrictions.

Image: The PM has been warned pressure on hospitals is unlikely to ease for at least six weeks

The Daily Mail reported that holiday lets could be open in time for the Easter weekend and that pubs could open in May but that only a maximum of two households would be allowed to mix indoors.

The Daily Telegraph reported that the number of new cases would have to fall to below 1,000 per day before lockdown is softened – a long way from the 10,625 confirmed cases reported on Tuesday.

This was echoed by Steve Paterson, professor of genetics at Liverpool University, who told Sky News the number of new cases should be “in the low thousands per day”.

A DHSC spokesman said: “We have not finalised further plans for testing.”

Earlier on Tuesday, the head of the UK’s vaccine taskforce Clive Dix told Sky News that every adult in the UK could receive both doses of a coronavirus vaccine by August or September “or maybe sooner if we need to”.