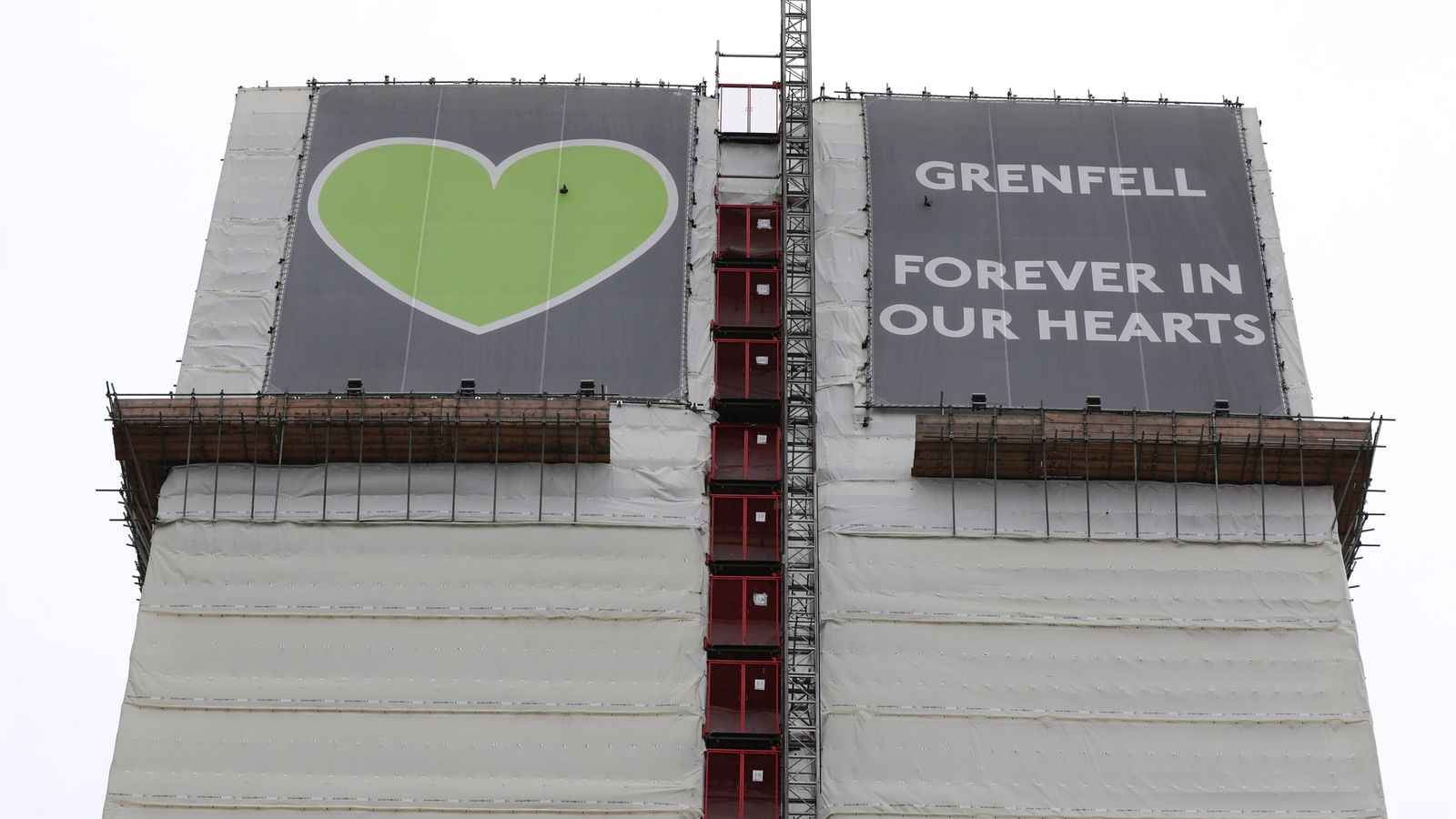 The company that made cladding for Grenfell Tower did not tell certifiers about a “disastrous” failed fire test of the product which happened 13 years before the disaster, despite a legal requirement to do so.

Arconic’s president Claude Schmidt told the Grenfell Tower Inquiry that the failure to disclose the test result was a “misleading half truth”.

He denied that the information was “deliberately concealed”, however.

Image: Arconic told a ‘misleading half truth’ about the flammability of their cladding. Pic: AP

Certifiers say the data from the “5B test” was “absolutely crucial safety information”.

The test in question was carried out in 2004 on Arconic’s Reynobond PE cassette product.

The cassette-style cladding that was used on the west London tower, which caught fire in June 2017, killing 72 people.

According to Arconic’s tests, the cassette panels burned much faster than the rivet-style one.

They also released seven times as much heat and three times the rate of smoke.

Data about the cassette panelling was not shared with certification bodies or customers – and both types of cladding were sold under the same fire safety certificate issued by the British Board of Agreement (BBA) in 2008.

The chief counsel of the Grenfell Tower Inquiry, Richard MIllet QC, said that under the contract between Arconic and the BBA, the company had to provide “any test data available”.

When asked if Arconic was legally required to provide the cassette test data to the BBA, Mr Schmidt replied through a French translator: “Yes, probably.

“According to the contract, Arconic was supposed to inform the BBA but at the same time that information … could have been obtained differently.

“The information certainly was available and it could have been supplied if it had been requested.”

Claude Wehrle – a technical manager at Arconic who is refusing to give oral evidence to the inquiry, citing a French statute – said in a witness statement the company saw the cassette test as a “rogue” result.

He said: “I considered that the BBA would be able to identify the relevant test as having been conducted using a rivet system, and had no reason to doubt that if the BBA had felt it necessary to ask for any other system test reports they would have done so.”

Mr Millett asked Mr Schmidt: “Do you accept, as the voice of Arconic, that not providing test 5B to the BBA was a deliberate concealment of what Arconic knew to be the true position, namely that the cassette variant of Reynobond 55 PE performed disastrously in a fire?”

Cladding victim warns of ‘another Grenfell’

Mr Schmidt said: “No, when you say deliberate, that’s too much.”

Asked if it was accidental, he said: “I can’t reply, I can’t answer and I can’t give any qualifications, I can’t know what Claude Wehrle was thinking about or reasoning at the time.”

Mr Millett asked if providing only the rivet data to the BBA as representative of the fire performance of the Reynobond PE range amounted to “a misleading half-truth”.

Mr Schmidt said: “Yes, you can see it like that.”

An email from the BBA to Mr Wehrle was also shown to the inquiry.

The message asked for “any additional or missing information you may feel could be helpful to the user/specifier”.

Mr Schmidt agreed with Mr Millett that the “user or specifier would not only find the test 5B useful but in fact absolutely crucial safety information”.

But Mr Schmidt said it was “too strong” to call it “life-and-death stuff”.