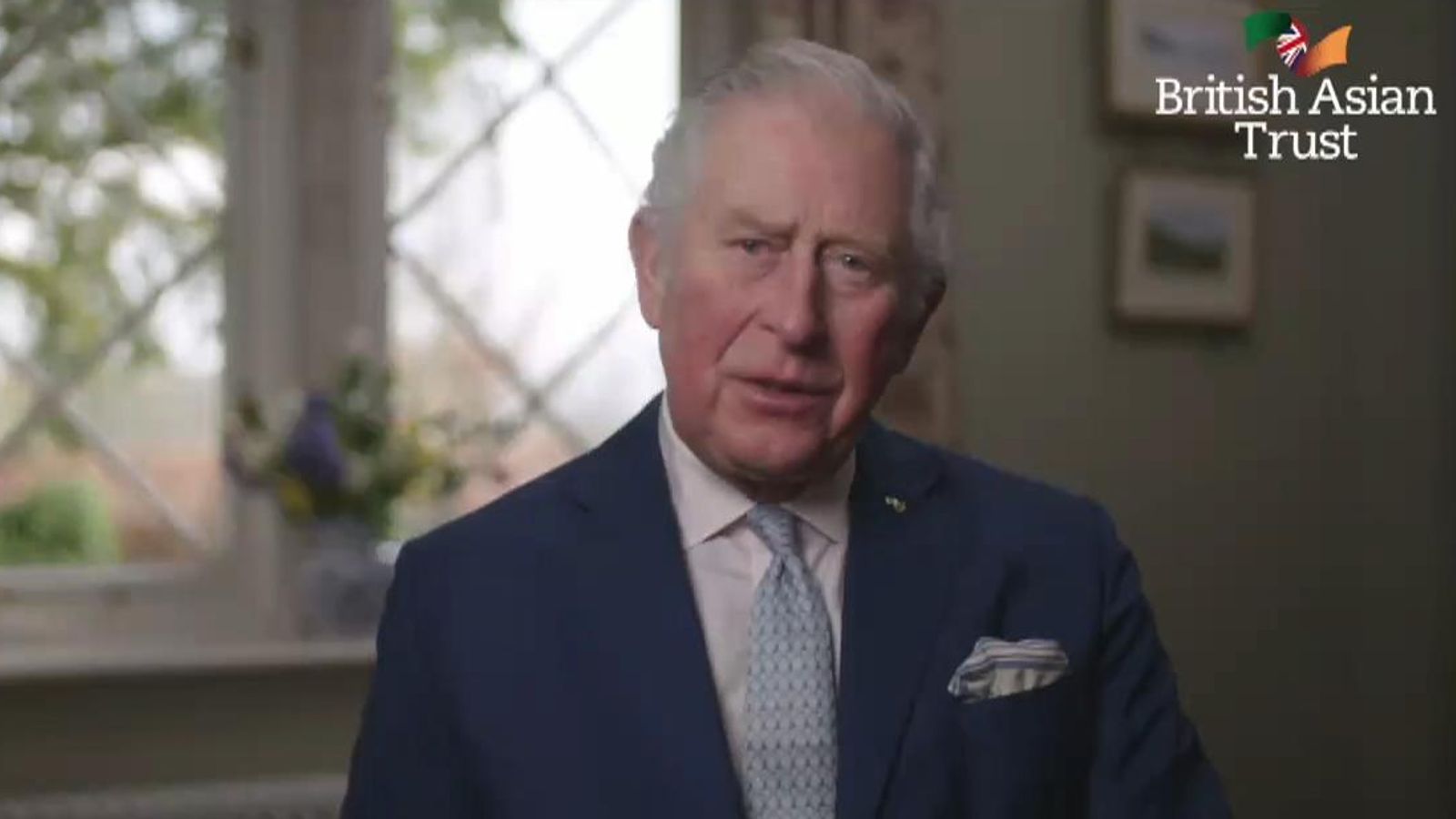 The Prince of Wales said he has been “saddened” by “the variable uptake of coronavirus jabs” in black and Asian communities.

Speaking remotely at a British Asian Trust webinar on vaccine safety, Prince Charles said production of the jab was thanks to a “superhuman effort by medical experts”, but called it a “tragedy” that the “benefits of such an achievement would not be experienced by everyone”.

Calling the pandemic a “pernicious threat” and the low vaccine rates among some communities a “vexing issue”, he said he had been inspired to speak out to “enable people from every background to take up the vaccine” and “that barriers to its adoption be removed”.

The event also introduced a celebrity-packed video urging people to have the COVID-19 jab.

The coronavirus myth-busting short film will also be shown across the UK’s main commercial TV channels – Sky, ITV, Channel 4, Channel 5 and STV – at 21:56 GMT tonight, in the “biggest roadblock in TV history”.

The three-and-a-half-minute programme, which was originally shown online, now has a host of new stars urging people to #TakeTheVaccine.

Romesh Ranganathan, Adil Ray and Meera Syal are among the stars featured in the video

Citizen Khan creator Adil Ray originally co-ordinated the video in response to research showing the pandemic disproportionately affected people from ethnic minority communities while at the same time suggesting that those people are less likely to get vaccinated.

The video tackles the phenomenon of fake news surrounding vaccine take-up, which has been particularly prohibitive in South Asian communities.

Comedian Ranganathan jokes: “There’s no chip or tracker in the vaccine to keep watching where you go. Your mobile phone actually does a much better job of that.”

The celebrities’ video also states there is no scientific evidence to suggest it will work differently on people from ethnic minorities and that it does not include pork or “any material of fetal or animal origin”.

Vaccines minister Nadhim Zahawi has said he is concerned the take-up of the jab might be lower in BAME communities after a document released by the Scientific Advisory Group for Emergencies (SAGE)found hesitancy was highest in black or black British groups, with 72% stating they were unlikely/very unlikely to get the jab, followed by Pakistani/Bangladeshi groups.

Adults in minority ethnic groups are less likely to receive vaccines than those in white groups by between 10-20%, the report said.

Concluding his virtual speech, Prince Charles also thanked NHS staff who had come out of retirement to help fight COVID-19, and urged everyone to get the jab, saying: “Vaccination will save lives… and allow us to start to hope that some things will soon return to normal for every member of our society.”

More than 15.5 million people across the UK have now received their first dose of the vaccine.

Have any anti-vaccine messages, leaflets or videos been shared with your friends and family? Please send them to Sky News: