Darren Drysdale: Referee who squared up to player given weekend off after ‘incredible’ incident 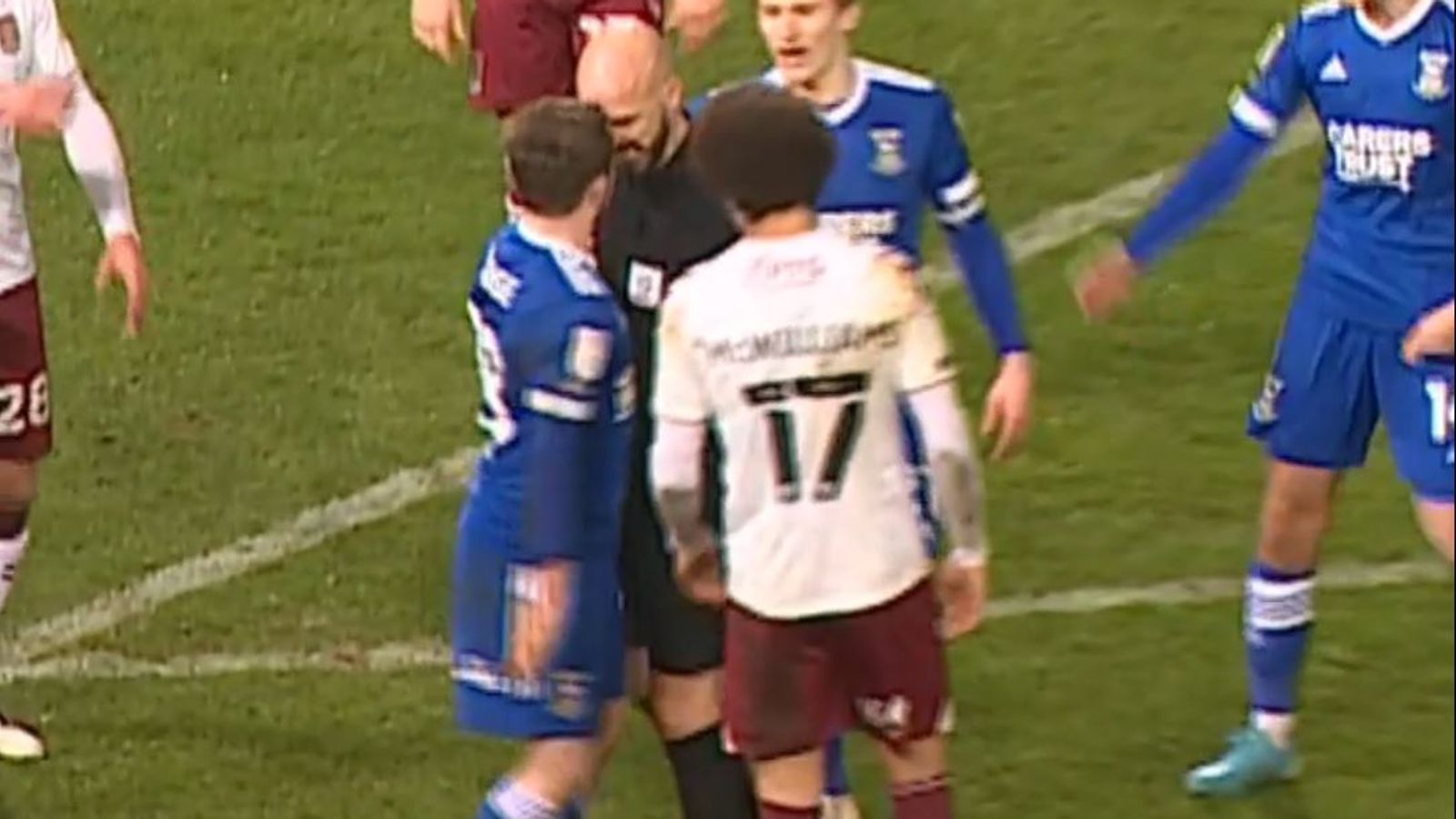 A referee who squared up to a footballer during a game has been taken off officiating duties this weekend – even as the player involved forgave him.

Darren Drysdale, 50, will no longer take charge of Saturday’s EFL League Two game between Southend and Bolton, the league has said, after squaring up to and leaning his head towards Ipswich Town’s Alan Judge.

Video of the incident at the end of Tuesday’s 0-0 draw with Northampton has been viewed, shared and liked hundreds of thousands of times combined on social media.

As I said in this . There was no need for an apology. I wasn’t looking for one or looking for any action to be taken. In football as everybody knows stuff happens in the heat of the moment in a game. We all make mistakes and for me that is the end of this https://t.co/ujQsF9lQ4N

The Lincolnshire official was charged with improper conduct by the Football Association (FA) on Wednesday.

The FA said in a statement: “It is alleged that the match official’s [Darren Drysdale’s] behaviour during the 90th minute of the game amounts to improper conduct and he has until Thursday 4 March 2021 to provide a response.”

But the player at the centre of the controversy was much more forgiving. Judge, 32, told Drysdale in a tweet that there is no need to apologise as “everybody knows stuff happens in the heat of the moment in a game”.

“We all make mistakes and for me that is the end of this,” he said.

Drysdale apologised for the incident on Wednesday, admitting he had failed to maintain the required composure throughout the game or to “always engage with players in a professional manner.”

That cut little ice with Judge’s manager, Paul Lambert, who told Sky Sports News: “I think the apology is very soft – it’s easy to say sorry after the event.”

“What happened was incredible, I’ve never seen that, for a referee to go head-to-head with a player.

“He had to get pulled away by the Northampton players and at that time he’s out of control.

“What would have happened to Alan Judge if he’d done that to the referee? He’d have been looking at a six-month ban, a one-year ban and a massive fine.”

Player and ref exchanged words in the 90th minute of the game after the midfielder’s appeal for a penalty had been turned down before Drysdale, who turns 50 on Thursday, leant into Judge.

Former Premier League referee Dermot Gallagher told Sky Sports News that Drysdale’s crucial mistake was losing his calmness and composure – something he said all referees must always have.

He said: “It’s unusual for a referee to react like that and you have to commend the players for what they did, they defused it very quickly.

“It’s interesting that the few times referees get in trouble, the players always pull together to look after them if they get injured or whatever. The players were absolutely excellent in this situation.

“No matter how heated it gets, you still have to maintain this little bit of distance and stay calm. That’s the be-all and end-all for referees because if you’re composed, that’s when you make good decisions.”