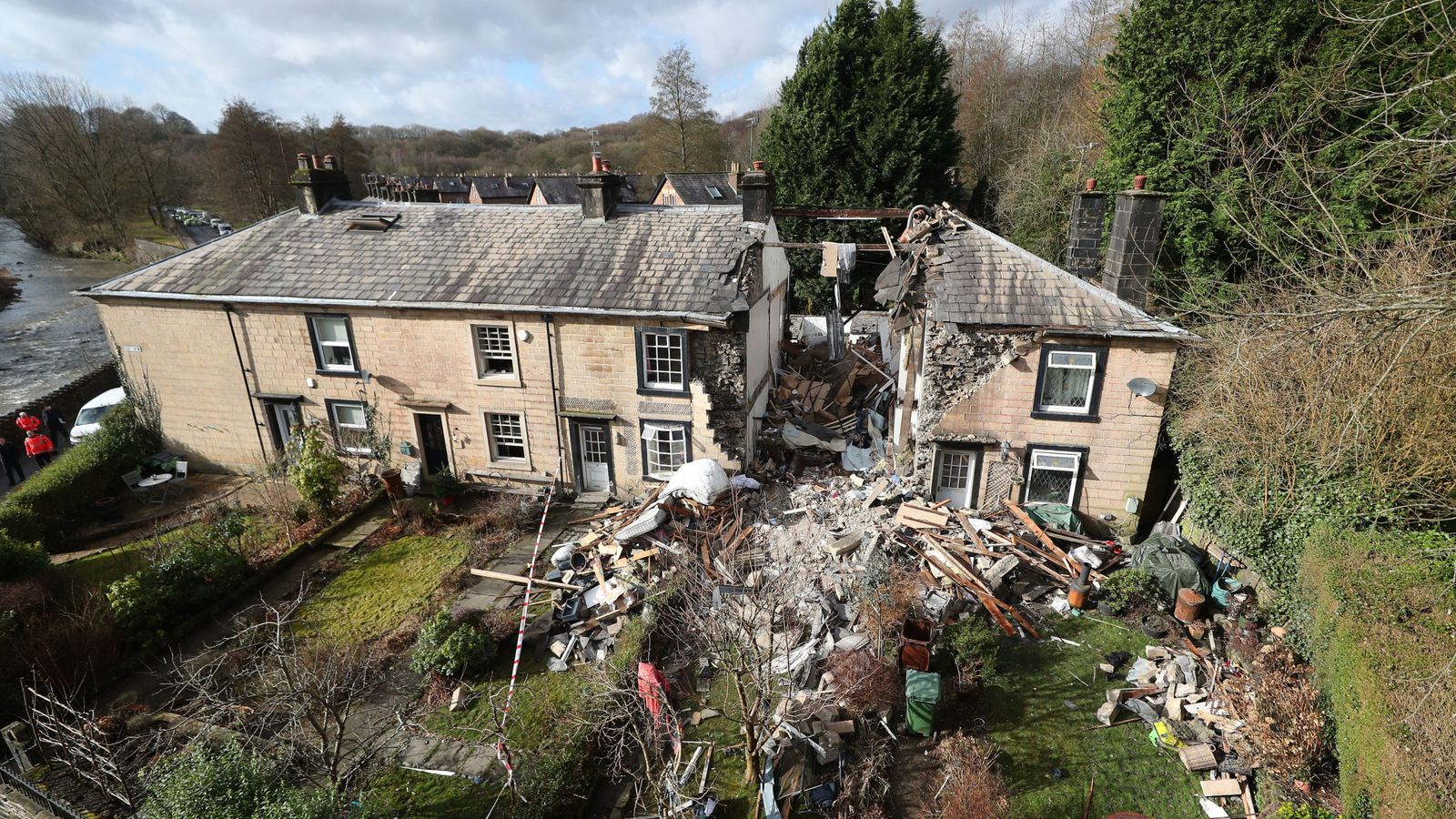 The body of a woman has been found after a house collapsed near Bury following reports of an explosion.

It happened on an estate in Summerseat, a village in the Ramsbottom district of Bury, after 9pm on Wednesday.

He said: “We believe we know who she is based on this address and initial enquiries.”

She was pronounced dead at the scene and another woman and child were taken to hospital with minor injuries, the force said.

Ch Insp Collins said 30 surrounding houses were initially evacuated but all residents apart from those living on the same road as the collapsed house had been allowed back into their properties.

Image: The property collapsed overnight following reports of an explosion

Although the cause of the collapse has not been officially confirmed, Daniel Peace, who lives nearby, said “there was this huge noise, like a bomb had been dropped in the middle of the street”.

“I expected to look out the window and see a crater or something, it was unbelievable,” he told Sky News.

A joint investigation is being carried out by police, Greater Manchester Fire and Rescue Service and local authorities.

Firefighters from Bury station are monitoring the structure of the affected mid-terrace home and neighbouring properties in the immediate vicinity.

If deemed safe, residents will be allowed back into their homes, but in the meantime crews have said they will retrieve any essential personal items including medication, mobile phones and bank cards for those that need them.

Incident Commander Steve Wilcock said: “I want to first pass on my condolences to the family and friends of the woman who tragically lost her life at this incident – our thoughts are with them at what must be an incredibly sad and difficult time.

“Given the nature of this scene I must also praise the professionalism and dedication of the firefighters who have worked here all night in the driving rain, as well as throughout the morning. An investigation is now under way so it would not be appropriate to speculate at this time on a probable cause.”

He also thanked the “close-knit” Summerseat community with many neighbours offering their homes to those evacuated last night.

Bury Council leader Eamonn O’Brien said on Twitter that he had been at the scene, adding: “The council and emergency services are currently supporting residents.

“The community response has been incredible as always. Thank you.”

Electricity North West said in a tweet that it had cut power supplies to 60 properties following the incident.