Harry and Meghan: Duke and Duchess of Sussex tell the Queen they will not return as working members of Royal Family 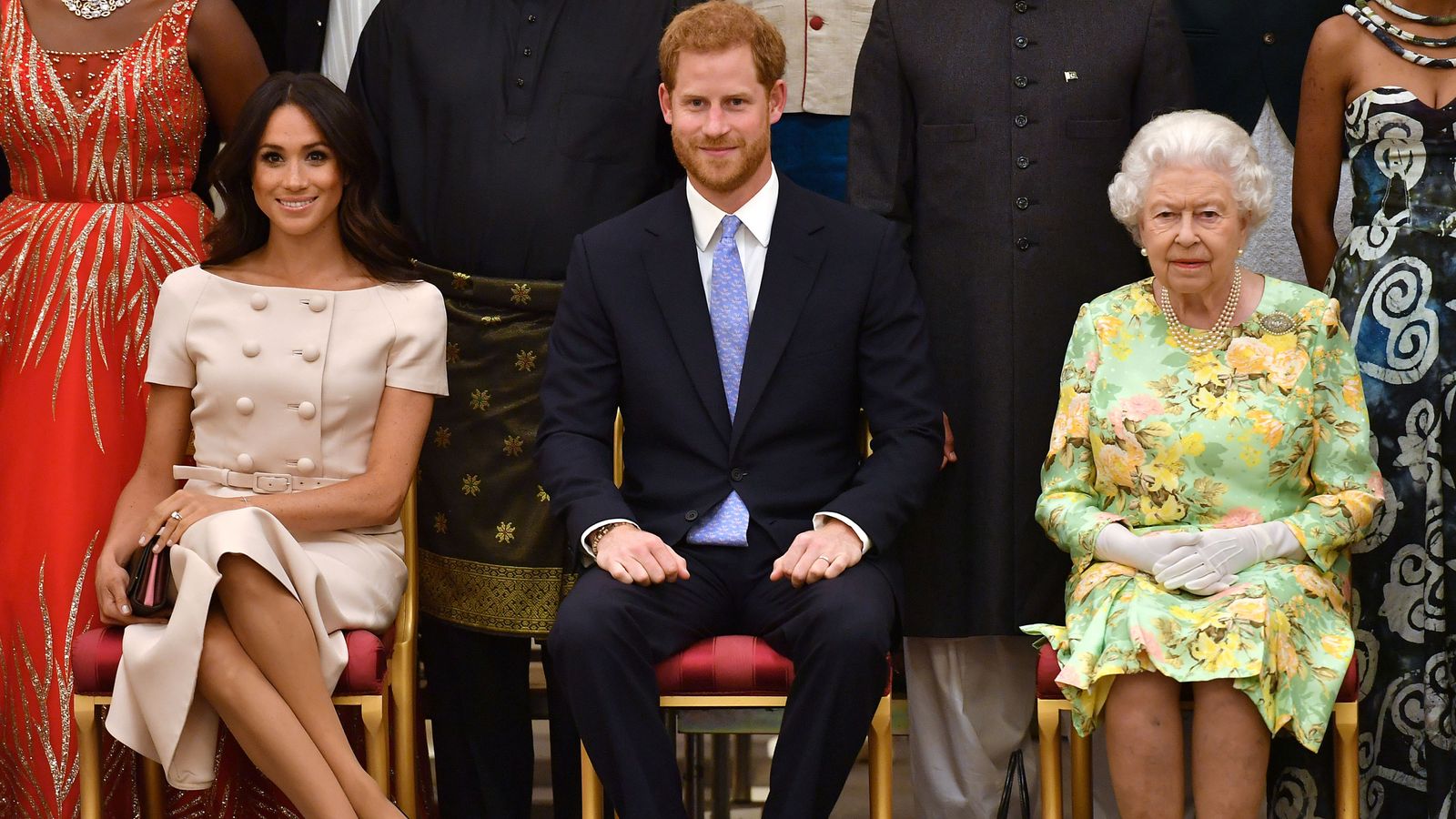 The Duke and Duchess of Sussex have told the Queen they will not return as working members of the Royal Family.

A Buckingham Palace statement said the royals were “saddened by their decision” but that Harry and Meghan “remain much loved members of the family”.

Honorary military appointments and royal patronages – such as Harry’s affiliation with the Royal Marines – will be returned to the Queen and “redistributed among working members of The Royal Family”.

Sky’s royal correspondent, Rhiannon Mills, says there appear to have been “tense discussions” behind the scenes and that the couple “don’t sound happy” in their latest statement.

Image: The couple decided to step back from royal duties last year and now live in the US. Pic: AP

Harry and Meghan stepped back as working members of the Royal Family last year as they began a new life in the US, and a 12-month review on their future was launched.

The couple’s statement said: “As evidenced by their work over the past year, The Duke and Duchess of Sussex remain committed to their duty and service to the UK and around the world, and have offered their continued support to the organisations they have represented regardless of official role.

“We can all live a life of service. Service is universal.”

Confirmation of their future status comes ahead of an interview next month with Oprah Winfrey – something royal watchers say could prove an “uncomfortable watch” for the Windsors.

The couple also recently announced they are expecting their second child, while Meghan won a privacy case against the Mail On Sunday.

With them stepping back permanently from royal duties, the palace said the Queen had confirmed in writing that it was “not possible to continue with the responsibilities and duties that come with a life of public service”.

That means cutting their official links with military, Commonwealth and charitable associations.

Prince Harry will no longer be captain general of the Royal Marines and he also loses roles with RAF Honington and the Rugby Football Union (RFU).

The Duchess of Sussex’s status as royal patron of the National Theatre also ends, while the couple are no longer president and vice-president of the Queen’s Commonwealth Trust.

Buckingham Palace said the decision was taken after conversations between the duke and members of the Royal Family.

Losing his military links will be an “enormous blow” to Prince Harry in light of his decade in the Army, says royal correspondent Rhiannon Mills.

“He is such a proud man when it comes to having served his country… He really wanted to show that despite moving to America he could continue to represent his military family.”

Image: Losing his official royal links with the military is likely to be an ‘enormous blow’, says Mills

There is still an “undeniable rift” between the couple and other royals – and the tone of their statement gives the impression they feel “pushed to one side”, says Mills.

Some of the organisations losing their links to Harry and Meghan have thanked them for their support.

The National Theatre said it was “very grateful” for the Duchess of Sussex’s contribution.

It said she had “championed our work with communities and young people across the UK, and our mission to make theatre accessible to all”.

A tweet from England Rugby said the RFU “greatly valued” Harry’s role in supporting the game.

The Queen’s Commonwealth Trust said the couple had provided “keen support and encouragement” and “remain in our circle of supporters”.

Harry and Meghan’s new life in the US has already seen them sign deals with Spotify and Netflix estimated to be worth more than £100m.