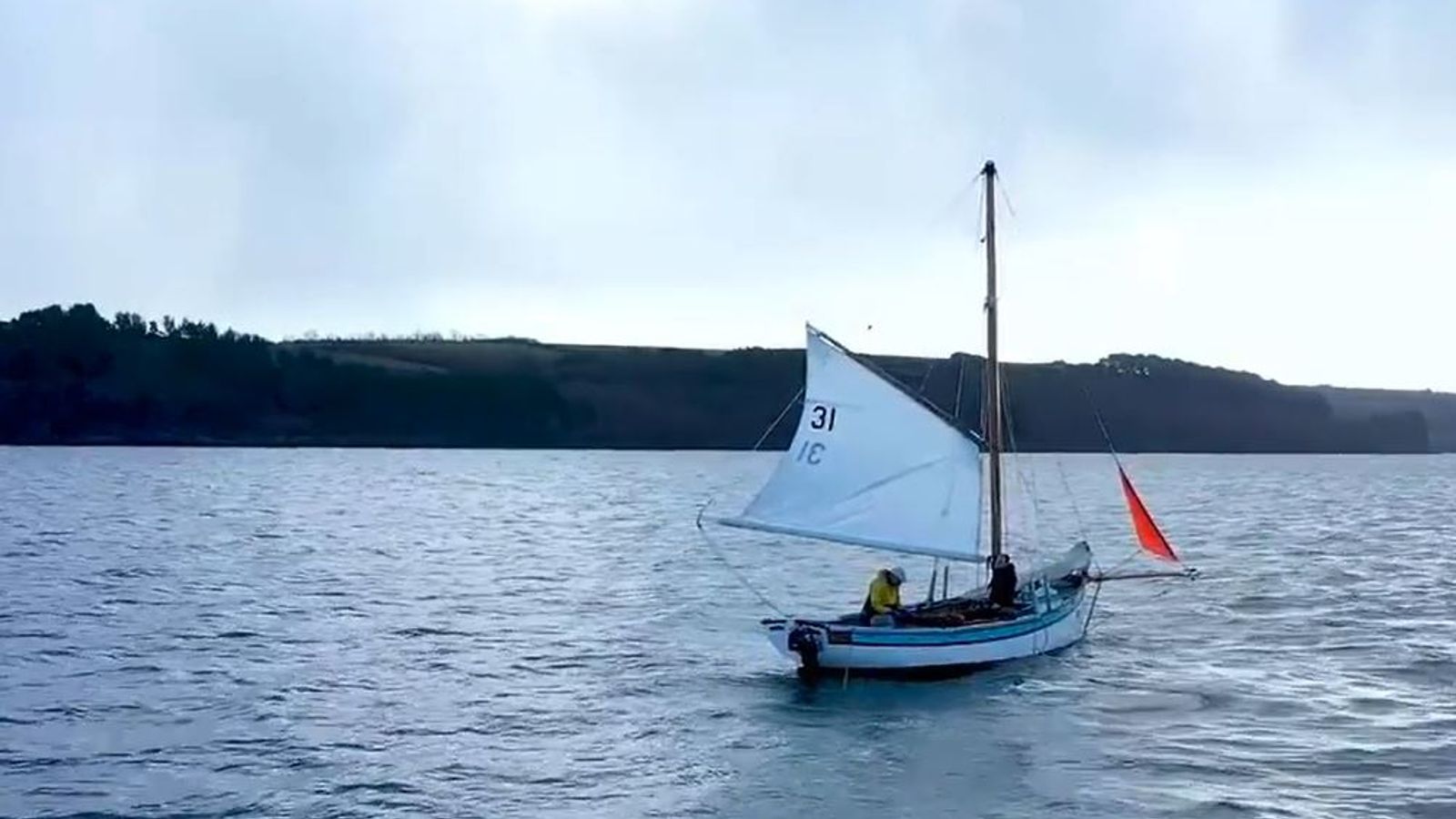 Shellfish workers in Cornwall say some are at risk of losing their homes because of an overnight ban on exporting their product to the EU.

Since 1 January, the European Union has stopped British fishermen from selling oysters, scallops, clams, cockles and mussels, known as live bivalve molluscs (LBM), that are caught in so-called “Class B” waters.

The government says it is seeking an “urgent resolution”, while the European Commission told Sky News the ban, on health grounds, applies to all third countries and “is not a surprise” to the UK.

Image: Some fishermen say their incomes have stopped completely

The Sailors Creek Shellfish company in Falmouth, Cornwall, has seen 99% of its business disappear.

It buys shellfish from a group of independent fishermen known as the Oystermen of the Fal, who for hundreds of years have used just wind and oar to dredge the riverbed for oysters and scallops.

Their shellfish are supplied to restaurants across Europe.

Tim Heard, 65, has been catching oysters for 50 years – and has seen his income completely stop.

Emphasising the seriousness of the situation post-Brexit, he said: “If I never had a bit of money in the bank and my wife wasn’t working, I think we’d be out of a house.”

He added: “There are people here that have turned to drink because of the strength of this – they don’t know where to go, what to do, how to pay their bills.

“We thought we were going to carry on after Brexit – the market was supposedly sorted – but they slammed the door in my buyers’ face. I think it’s the EU teaching Britain a lesson for Brexit.”

“I got friends in Padstow that have spent in excess of two million pounds on crabbing – they’ve been stopped dead. I wouldn’t sleep at night,” he added.

Image: The European Commission says the ban applies to all third countries and should not be a surprise to the UK government

Martin Laity, who runs the Sailors Creek Shellfish company, said there’s no reason why the export trade in Class B shellfish can’t continue.

“Before Christmas, we were promised access to a market – tariff free – we thought bingo, here we go – but it’s not been the case,” he said. “These tariff-free barriers are quite an obstacle. We’ve got to get past the first barrier, which is permission to send it first, which we’re still waiting for.”

“There’s a lot of mortgages. People need the money,” he said. “This month, people have managed to pay their mortgage, this next month coming they won’t be able to… There’s two or three people we buy from in that position, two or three who’ve taken to the drink.

The UK export of LBM to the EU is worth around £15m – a fraction of the shellfish industry’s overall production. But Mr Laity says that’s not the point.

“There’s a lot of heritage and culture,” he said.

“Fiscally it’s not that big, but you can’t measure everything by numbers. If we were measured on a cultural standard, the Square Mile of London would be zero and we would be 100.”

He’s urging the government to put pressure on the EU to make UK Class B LBM exempt from the ban.

“Get a move on. Sort it out. Get some stamina. Get over to Europe and sort it out,” he said. “We want to know; can we export our product? If we can’t then we need some big intervention to facilitate another market.

“And I’m not talking fairy tale markets 6,000 miles away on an aeroplane where the freight charges have gone up three-fold. I’m talking about proper markets, maybe something in the UK, on mass. People from the category B shellfish sector produce a lot of product, thousands and thousands of tonnes.”

Image: UK export of Class A shellfish, essentially caught in cleaner waters, to the EU is still allowed

Falmouth councillor Jayne Kirkham said: “It’s gutting. The Oystermen of the Fal have been in Falmouth for so long, they are such an important part of the town, it brings something unique. Not only would we lose the export industry, but we also wouldn’t be able to eat our own in the restaurants.”

UK export of Class A shellfish, essentially caught in cleaner water, to the EU is still allowed.

Purifying Class B products would allow export, but the industry says that process would make the business unviable.

In a statement, the Department for Environment, Food and Rural Affairs said: “It is unacceptable that the European Commission has changed its position regarding the export of live bivalve molluscs from Class B waters. There is no scientific or technical justification for this, and it is already impacting businesses on both sides of the Channel.

“We’re seeking urgent resolution on this matter and have requested a meeting with the Commission in the coming days. We are willing to provide additional reassurances to demonstrate shellfish health within reason, but this must recognise the existing high standards and history of trade between us.”

Image: The UK government says it is seeking an ‘urgent resolution’

A European Commission spokesperson said: “Import into the EU of live bivalve molluscs for human consumption is allowed only if they originate from classified areas A and meet all the health and sanitary requirements for molluscs destined for immediate human consumption.

“Consequently, live bivalve molluscs originating from third countries from production areas classified as B or C cannot be imported into the Union as they do not meet these health requirements. This also applies to the UK, now a third country.

“The rules in this area have not changed. They have applied, and continue to do so, to all third countries. The Commission has informed the UK Chief Veterinary Officer and the British shellfish industry that such requirements are not temporary and are now applicable to all shellfish imported from the UK as a direct consequence of Brexit.

“This is not new and it is not a surprise to the UK administration. The Commission has received the letter sent by the UK Environment Secretary, George Eustice, to Commissioner Kyriakides about trade in live bivalve molluscs from Great Britain to the EU for purification in the EU. A reply was sent confirming the legal reality in this area.”