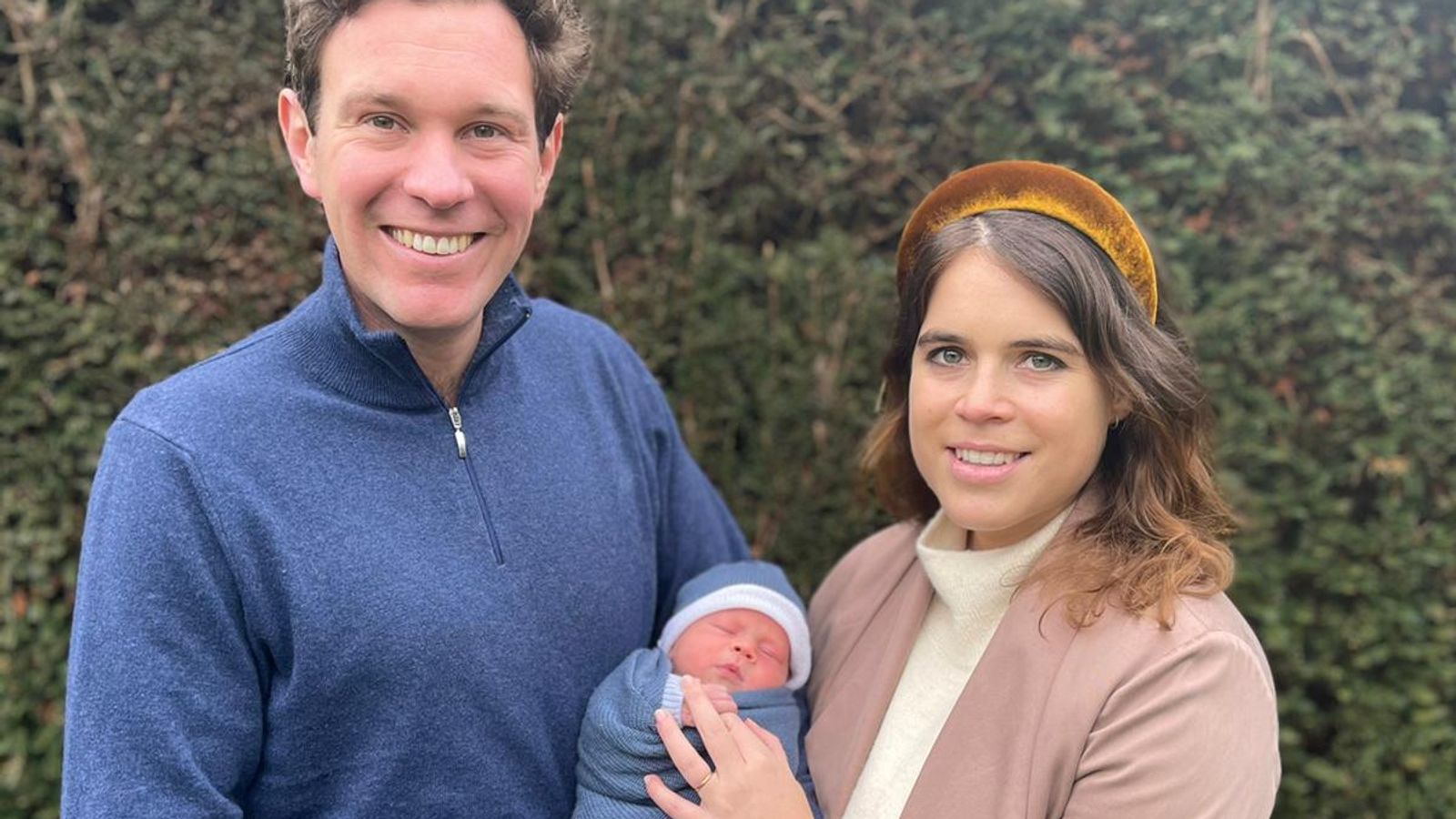 Buckingham Palace has released an image of the couple with their baby boy, who was born at the exclusive Portland Hospital in central London at 8.55am on 9 February.

In the picture, the baby – the Queen’s ninth great-grandchild – is wrapped in blue while being held by his father and clutching his mother’s finger.

Image: ‘We wanted to introduce you to August Philip Hawke Brooksbank’

Sharing the photo on Instagram, Eugenie said it was taken by their midwife and thanked well-wishers for their messages.

“We wanted to introduce you to August Philip Hawke Brooksbank,” she wrote.⁣

“Thank you for so many wonderful messages. Our hearts are full of love for this little human, words can’t express. We are excited to be able to share these photos with you.⁣
⁣
” By our wonderful midwife. Thank you to the wonderful essential workers including our midwife who came to discharge our boy.”

A tweet from the official Royal Family account said: “The couple have been touched by the well wishes they have received on the birth of their first child, and are delighted to share this first photo as a family.”

The new arrival was 11th in line to the throne when he was born, but following the news that the Duchess of Sussex is expecting a second child, he will move to 12th place when the baby arrives.

It is understood the couple chose the name August after Queen Victoria’s consort Prince Albert, who had Augustus as a middle name, while Hawke is a Brooksbank family name.

Choosing Philip as a middle name pays tribute to the Duke of Edinburgh, who is currently being treated at King Edward VII’s hospital, having been admitted on Tuesday after feeling unwell.

In an additional post on her Instagram Stories, Eugenie, 30, referenced her father, the Duke of York, turning 61 on Friday.

“On his grandfather’s birthday weekend, thinking of my grandfather, we are introducing our little boy,” she wrote. “He is named after his great grandfather and both of his great x5 grandfathers.”

A regular Master Brooksbank even though his mother is a princess, August’s arrival came as some good news for the Royal Family just two weeks before Harry and Meghan’s confirmation that they would not be returning as working members.

“Many will be pleased to see a lovely nod in the middle names to Beatrice’s grandfather Prince Philip, who currently remains in hospital,” said Sky News’ royal correspondent Rhiannon Mills.

“The photographs are a nice break from royal tradition; no official photographer brought in, instead they were taken by the couple’s midwife.

“The ninth great-grandchild is certainly something to cheer up the Queen and the Duke of Edinburgh in what has been a difficult week, with the duke feeling unwell and the sadness and ill-feeling around the announcement concerning the Sussexes stepping away from royal life.”

Image: The couple’s son will be a regular Master Brooksbank

Before revealing his name on Saturday, Eugenie had announced her son’s birth with a simple black and white picture of one of his hands on Instagram.

The Queen and Prince Philip said they were “delighted” by the new arrival, as did Eugenie’s parents the Duke of York and Sarah, Duchess of York, and Mr Brooksbank’s parents.

Eugenie announced her pregnancy in September, almost two years after she and Mr Brooksbank were married in a ceremony at St George’s Chapel, Windsor Castle, in front of royal and celebrity guests including Kate Moss, Liv Tyler, Demi Moore and Stephen Fry, in October 2018.

Mr Brooksbank is European brand director of Casamigos Tequila, co-founded by the actor George Clooney, while Eugenie is a director at the contemporary art gallery Hauser & Wirth in London.

When Eugenie was born in 1990, her unusual name came as something of a suprise. Pronounced “Yoo-junnee”, it was inspired by one of Queen Victoria’s granddaughters, Victoria Eugenie of Battenberg – and the princess now goes by the nickname “Euge”.

Care homes: What are the new rules on visits? Do I need a test or a vaccine?