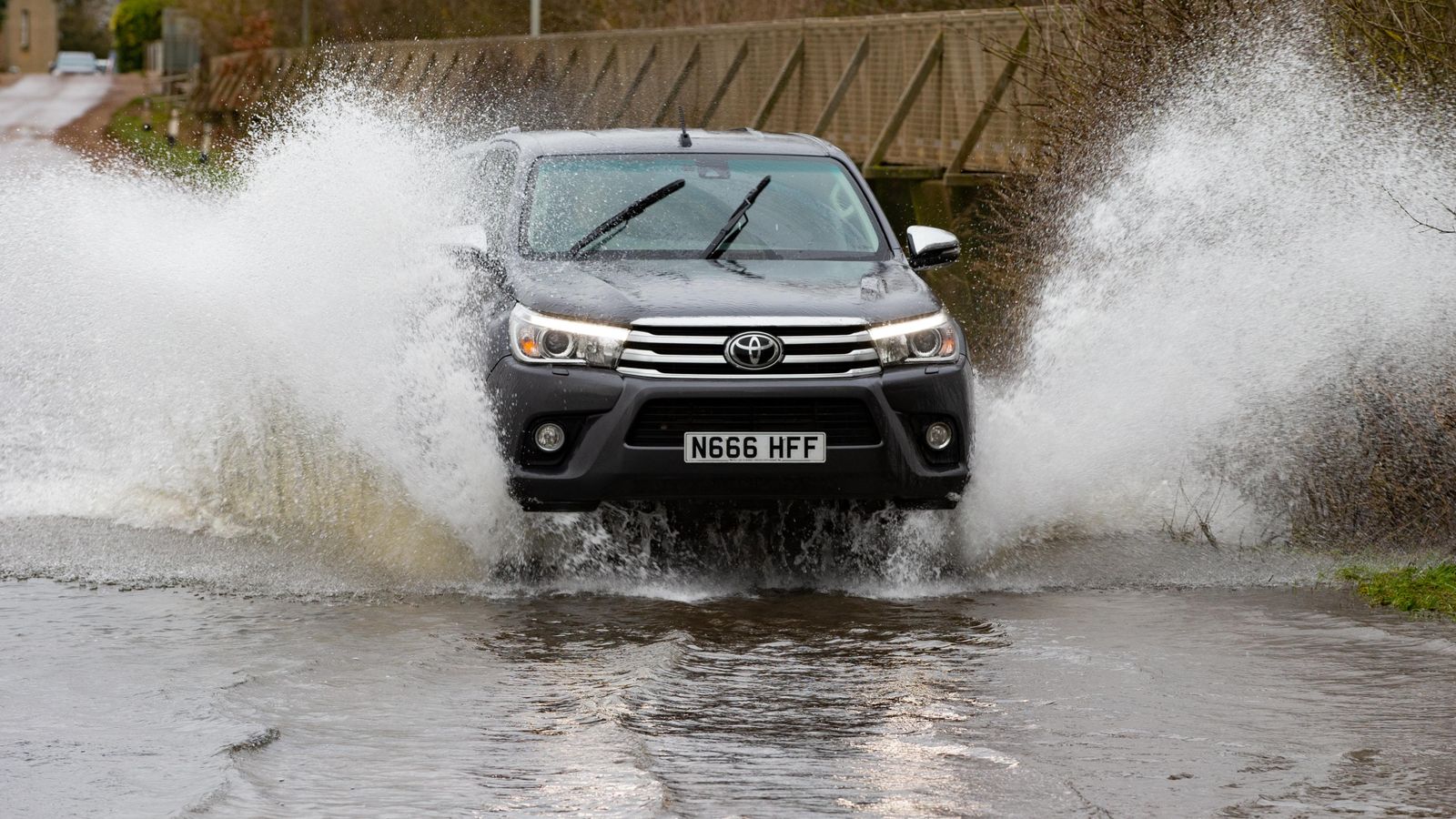 Weather warnings are in place for several parts of Britain as heavy rains could bring flooding and travel disruptions across the weekend.

Five western areas from Scotland to Plymouth are subject to a Met Office yellow warning, with a more serious amber warning current for South Wales.

Heavy rain is forecast there for much of Saturday, with up to almost 3in (70mm) expected widely within the area concerned, which covers South Wales from Pontypool in the east to Haverfordwest near the west coast.

Image: Yellow and amber weather warnings are in place for parts of the UK. Pic: Met Office

Double that amount (150mm) is expected on high ground and upslopes in the south and southwest of the amber zone and almost 8in (200mm) possible at the highest ground, the office says.

The warning, in place until 4pm on Saturday, says “as well as heavy rain, strong to gale-force southerly winds will be an additional hazard”.

There is a “good chance” some communities in the region will be cut off by flooded roads, while power cuts and delays and cancellations to train and bus services are likely.

Natural Resources Wales had issued 39 flood alerts and 26 flood warnings as of Saturday lunchtime, while the Environment Agency issued 12 flood warnings, where flooding is expected and immediate action required, and 105 flood alerts for England.

Yellow weather warnings are also in place across large parts of West Wales and South Wales, parts of West, southwest and central Scotland from Friday until Saturday night, parts of Devon and Cornwall from Friday to Saturday and parts of Cumbria on Saturday.

“Some places there could see up to 200mm of rainfall by the end of Saturday. That would be nearly double the average for February for southern Wales.

While “Monday looks fine for most places”, she warned that Tuesday “will see further outbreaks of rain with heavy downpours for the North and West as well as Ireland, which could exacerbate any flooding issues for these areas,” she said.

Met Office weather forecaster Marco Petagna said the east of the country would have a much quieter weekend with mild temperatures up to 16C in the South East, but with light and patchy rain on Sunday.

He agreed about the prognosis for next week, saying “there’s more rain to come”.

“There will be some respite Sunday and Monday but going into Tuesday there’s some more rainfall.

“Again the West and North West could see further rain developing,” he added.

Care homes: What are the new rules on visits? Do I need a test or a vaccine?