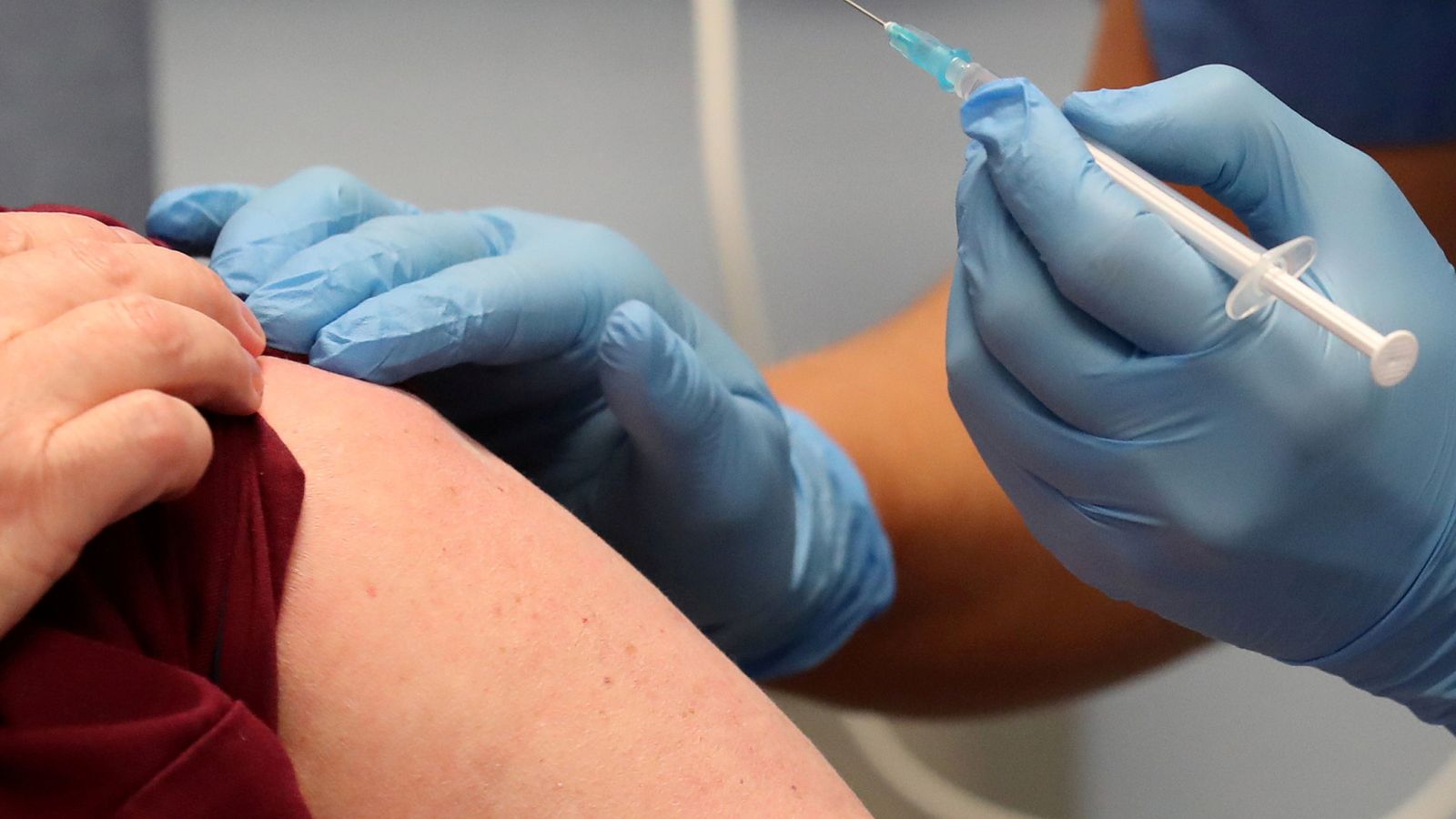 The COVID-19 vaccines being used in the UK could reduce a person’s risk of being admitted to hospital by as much as 94% four weeks after the first dose, new data suggests.

Experts examined coronavirus hospital admissions in Scotland among people who have had their first jab and compared them to those who had not yet received a vaccine.

Follow live coverage on Sky News as the PM is expected to address the House of Commons at 3.30pm and lead a Downing Street news conference at 7pm

Scientists from the Universities of Edinburgh, Strathclyde, Aberdeen, Glasgow and St Andrews and Public Health Scotland (PHS) looked at data on people who had received either the Pfizer/BioNTech jab or the one developed by scientists at the University of Oxford with AstraZeneca.

Four weeks after receiving the initial dose, the Oxford jab appeared to reduce a person’s risk of hospital admission by 94%.

Those who received the Pfizer jab had a reduction in risk of 85% between 28 and 34 days after the first dose.

Data for the two jabs combined showed that among people over the age of 80 – who are at high risk of severe disease – the reduction in risk of hospital admission was 81% four weeks after the first dose.

Lead researcher professor Aziz Sheikh said: “These results are very encouraging and have given us great reasons to be optimistic for the future.

“We now have national evidence – across an entire country – that vaccination provides protection against COVID-19 hospitalisations.”

Dr Josie Murray, PHS’s lead for the EAVE II project, said: “The brilliant news is that the vaccine delivery programme in its current format is suggesting that it’s working.”

“What I would urge people to continue to do is to follow all the public health guidance to stop transmission because these results don’t have any bearing on the virus’s ability to transmit from person to person.”

Professor on ease of lockdown and schools

She said that as a group of scientists, they would recommend policy makers continue following the JCVI guidance.

Dr Murray urged people offered the vaccine to take their first and second doses, and said: “We can see from these data that you can protect yourself and your family and your friends and you can also protect the NHS by taking the vaccine.”

The study team said the findings are applicable to other countries using the Pfizer and Oxford/AstraZeneca vaccines.

Researchers examined data between 8 December 8 and 15 February, and during this period, 1.14 million vaccines were administered in Scotland – 21% of the Scottish population.

Professor Chris Whitty, chief medical officer for England and co-lead for the National Institute for Health Research (NIHR), said: “This research provides encouraging early data on the impact of vaccination on reducing hospitalisations.”

Chris Robertson, professor of public health epidemiology at the University of Strathclyde, said: “These early national results give a reason to be more optimistic about the control of the epidemic.”

Meanwhile, Boris Johnson is to set out a “steady as she goes” plan for easing England’s lockdown, with schools and outdoor activities the first in line for a return from 8 March.

This comes as schools in Wales and Scotland began their phased return.