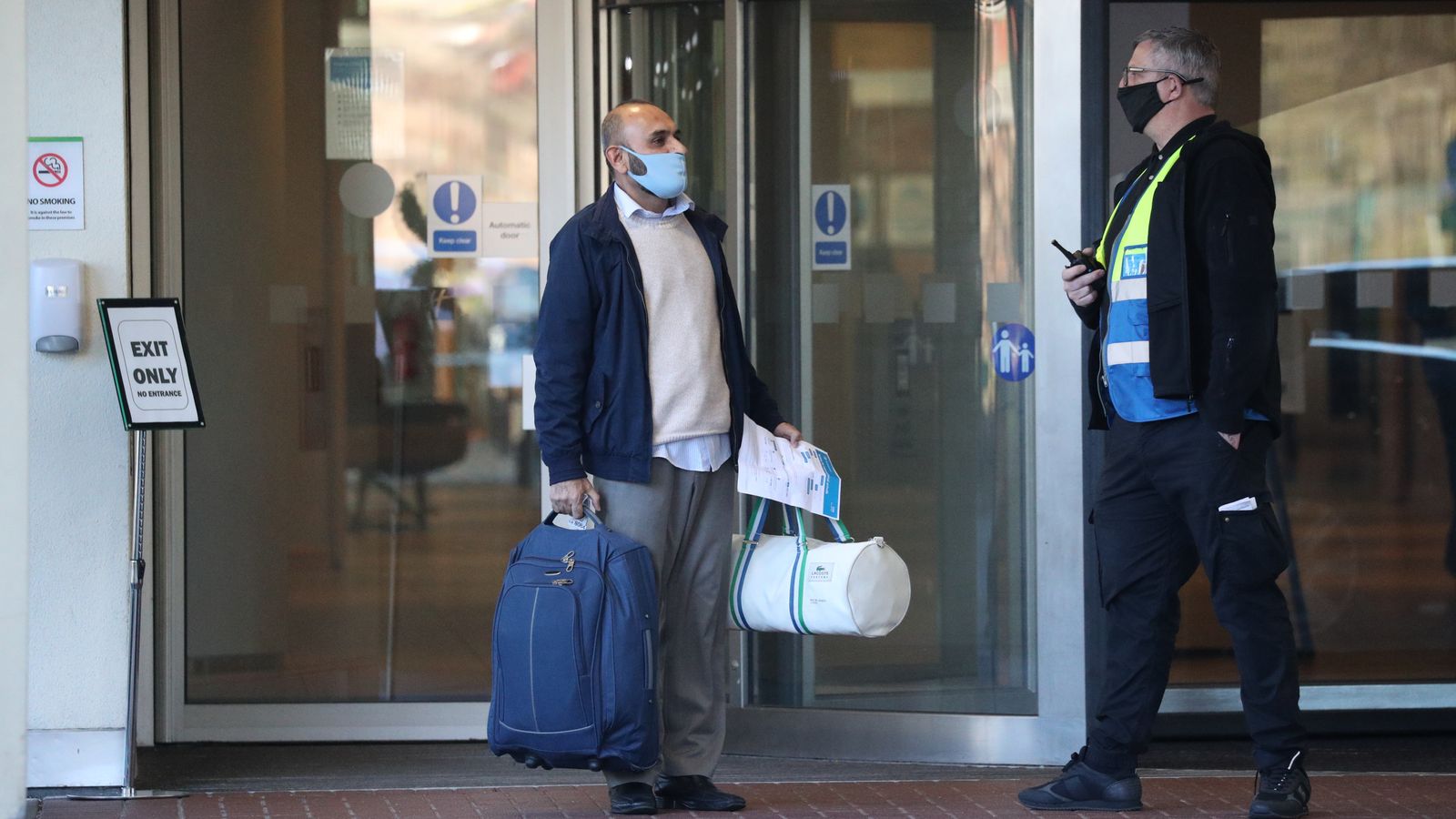 Some of the first people to check into quarantine hotels have had their first taste of freedom upon their release today after self-isolating for 11 nights.

From last Monday, UK and Irish nationals returning to England from a “red list” country deemed at high risk for COVID-19 have had to check into quarantine hotels.

The rule applies to people returning to Scotland from any destination.

One couple, Wagner and Elaine Araujo, who were among the first people to be released from hotel quarantine, said the experience was “horrible” but they enjoyed spending quality time together.

Image: Wagner and Elaine Araujo are now out of self-isolation

Mr Araujo told Sky News: “To be in quarantine was horrible. But we enjoyed the time because we are together.

Ms Araujo said: “We just feel proud of ourselves. We had conversation, we played cards, we enjoyed ourselves – it was like a second honeymoon!”

The couple tested negative on day two and eight of their stay, so are free to go home.

Those who return a positive coronavirus test have to remain in hotel quarantine for a further 10 days.

Eritza East, 37, from Southampton, said she is looking forward to seeing her husband after months apart after self-isolating at the Radisson Blu Edwardian hotel near Heathrow Airport.

She said: “It was not ideal, but it wasn’t terrible, I’ve been in much worse accommodation.

“The accommodation was really big and the beds were really comfy, the only problem was the food wasn’t always kid-friendly.

Image: A person waves as they leave the Radisson Blu Edwardian hotel after completing their quarantine

“Other than that, the security was really nice and very supportive.”

She added: “I’m looking forward to seeing my husband, I haven’t seen him in seven months.”

Meanwhile, an elderly couple said they were looking forward to walking around without being “escorted everywhere”.

Ruth Conway, 84 and her husband Norman, 72, from Keynsham, near Bristol, also stayed in the Radisson Blu Edwardian hotel after returning from a holiday in Portugal.

Leaving the hotel on Friday morning, Ms Conway said although the staff were “very good”, she questioned if they were “joking” when asked if she had a positive experience.

She added: “You could come outside as much as you wanted, my husband’s a smoker, so it’s desperate for him.

“But it would have been nice to walk around a garden or something.

“That’s what I can’t wait for, to walk around my garden at home and to be able to get out of one room without having to be escorted everywhere.”

Image: Guests take part in their daily exercise at the Radisson Blu Edwardian hotel during their stay

Another traveller, Zari Tadayon, 66, from north London, said on Wednesday she was “relieved” her quarantine was almost completed after arriving from Dubai last Monday.

She previously said she was unprepared for her stay and had not packed any books, adding: “How I’m going to cope I don’t know. It’s going to be tough.”

Government guidance states that travellers arriving in England must quarantine in a hotel if they have been in one of its 33 “red list” countries – which covers Portugal, the United Arab Emirates, South America and southern Africa – in the past 10 days.

The UK has banned direct flights from those locations, so passengers must take connecting flights, mixing with passengers from countries not on the list.

Last week, Boris Johnson said he expects those in quarantine to be able to “cover their costs” when asked what happens if a person has to extend their stay after a positive test.

The prime minister said: “It is currently illegal to travel abroad for holidays anyway.

“We would expect people who are coming in from one of these red list countries to be able to cover their costs.”

COVID-19: People in their 40s first for phase two of vaccine rollout