Shamima Begum: IS bride to find out whether she can return to the UK to fight citizenship decision 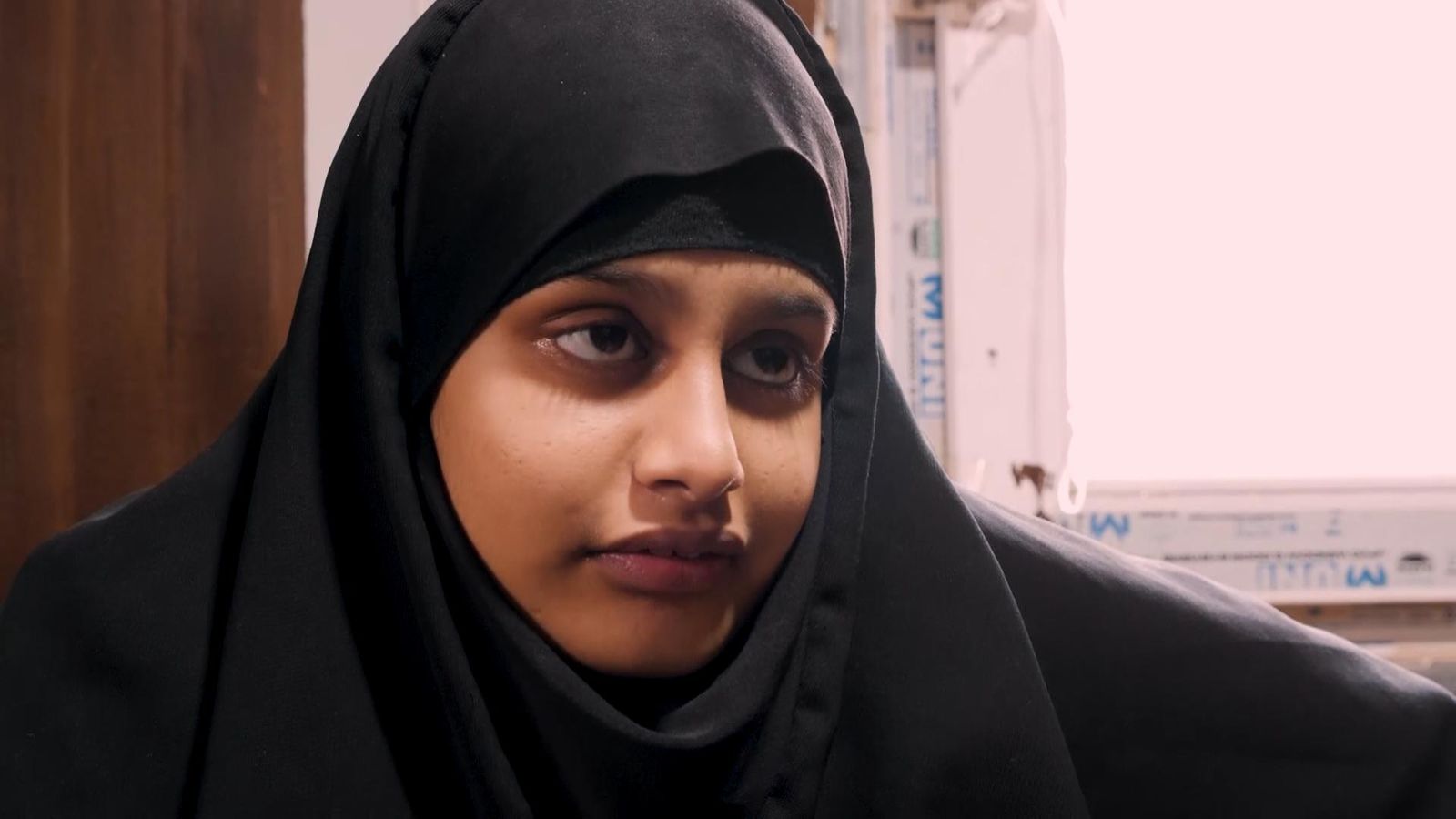 IS bride Shamima Begum will find out today whether she will be allowed to return to the UK to fight a decision to strip her of British citizenship.

The case could have huge significance for the government, which has revoked the citizenship of about 150 British nationals on grounds of national security.

The 21-year-old was one of three east London schoolgirls who travelled to Syria to join Islamic State in February 2015.

Image: Kadiza Sultana, Shamima Begum, and Amira Abase pictured going through Gatwick security in 2015 before departing for Turkey and then Syria

After the disintegration of the terror group, the former Bethnal Green Academy pupil was found in a northern Syrian refugee camp in February 2019, with other former IS brides and their children.

She was nine months’ pregnant, but her baby later died of pneumonia. She told reporters she had previously lost two other children.

In July last year, the Court of Appeal ruled that she should be allowed to return to the UK to challenge that decision, saying it was “the only way in which she can have a fair and effective appeal”.

But in November, the Home Office appealed that decision at the Supreme Court, arguing that allowing her to return to the UK “would create significant national security risks” and expose the public to “an increased risk of terrorism”.

The Supreme Court will also rule today on whether, if refused leave to re-enter the UK, Shamima Begum’s appeal against the removal of her British citizenship should be allowed.

At the hearing in November, her lawyers said she was currently in the al Roj camp in northern Syria, where conditions are “dire”.

Lord Pannick QC told the court that the Syrian Democratic Forces, which controls the al Roj camp, “do not permit visits from lawyers nor do they permit detainees to speak to lawyers”.

Image: All three girls were married to IS fighters with Kadiza Sultana later killed in an airstrike and the fate of Amira Abase unknown

Lord Pannick added that if his client could not return to the UK to pursue an effective appeal, “the deprivation appeal must be allowed” as there is “no other fair or just step that can be taken”.

Sir James said: “If you force the secretary of state to facilitate a return to the UK… the effect is to create potentially very serious national security concerns.”

Security service assessments of the dangers posed by the return of those who joined IS were read out at the November hearing.

Sir James said the assessments gauged that Shamima Begum presented a serious threat “justifying the removal of her British citizenship”.

“She is assessed to pose a real and current threat to national security. She is aligned with ISIS,” he said.

“During the four years she has spent in Islamic State territory she had undergone radicalisation and ‘desensitisation to violence’.”

If the government loses its appeal, the ramifications could be far-reaching.

Among the 150 people stripped of their British citizenship are two other women, codenamed “C3” and “C4”.

They and their children are also currently detained in camps in northern Syria.

Any decision to allow Shamima Begum to return to fight an appeal against her loss of citizenship could give them and dozens of other former IS members a similar avenue of return to the UK.

COVID-19: ‘Think about other people’: Queen speaks out on vaccine hesitancy