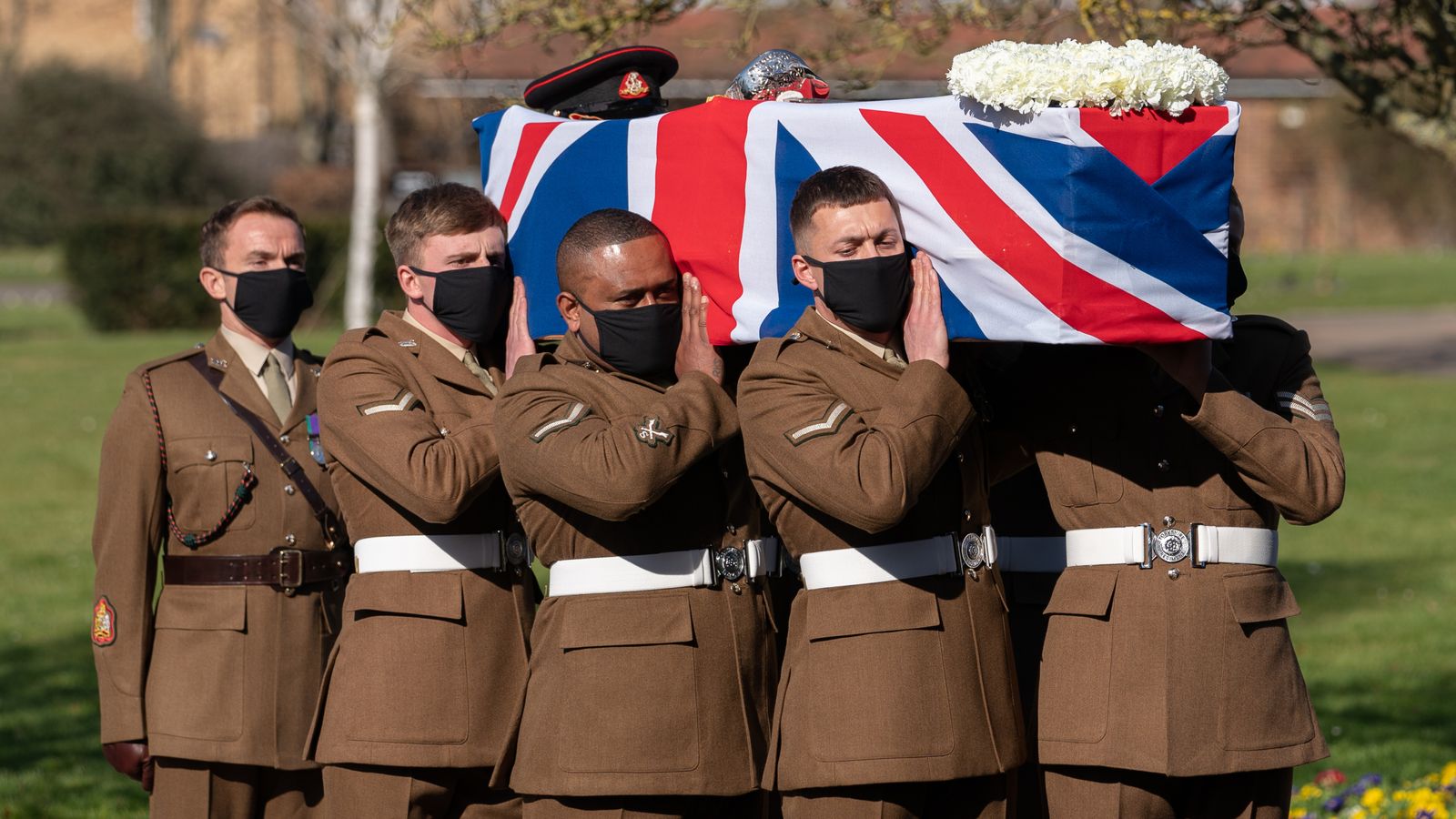 A Second World War plane soared over the funeral of Captain Sir Tom Moore in a military flypast as his family paid tribute to the 100-year-old veteran whose “message and spirit lives on”.

The C-47 Dakota flew over Bedford Crematorium to mark the death of Captain Sir Tom, who raised more than £33 million for the NHS before his death on 2 February.

His coffin was draped in a Union Jack, with his Second World War service cap, a wreath from the Yorkshire Regiment, his war medals and knighthood placed on top.

Image: Soldiers from the Yorkshire Regiment carry his coffin

Just eight members of his immediate family attended the funeral due to coronavirus restrictions, which began with the flypast and a firing party of 14 each firing three rounds in unison.

The service was also attended by his other grandson Max and two sons-in-law.

After a rendition of Captain Sir Tom’s charity single, a version of You’ll Never Walk Alone sung with Michael Ball and the NHS Voices of Care Choir, his daughter Lucy told of how proud she is of her father.

“Daddy, you always told us ‘best foot forward’ and true to your word that’s what you did last year, raising a fortune for the NHS and walking your way into the nation’s hearts,” she said.

“Daddy, I am so proud of you, what you achieved your whole life and especially in the last year,” she added through tears.

“You may be gone but your message and your spirit lives on.”

Image: Only eight members of his family were present at Bedford Crematorium

Captain Sir Tom raised a fortune for the NHS by completing 100 laps of his Bedfordshire garden before his 100th birthday in April.

His original hope was to raise just £1,000, but after capturing the nation’s heart, he went on to surpass £30 million.

The veteran’s other daughter Hannah, who managed his social media accounts and announced his death earlier this month, said the world had become “enthralled” by her father’s spirit of hope, positivity and resilience.

Image: A C-47 Dakota flies over the funeral Image: Members of the armed forces salute outside the funeral

She added: “We are so proud of the way you handled everything that happened.

“We have been so close as a family before this but we were thrust even closer together as the world became enthralled by your spirit of hope, positivity and resilience.

“They too saw your belief in kindness and the fundamental goodness of the human spirit.”

Grandson Benji said “there is a piece of you in everything I do”, while granddaughter Georgia read a poem called The Magician, which spoke of how he could achieve anything.

Image: Captain Sir Tom punches the air on his 100th birthday as a flypast goes over his home

The service, which was broadcast around the world, also included a specially recorded version of Smile by Michael Buble, music from Dame Vera Lynn, and ended with Frank Sinatra’s My Way and a bugler playing The Last Post.

Six members of the Yorkshire Regiment carried Captain Sir Tom’s coffin before it was committed for cremation.

The centenarian, who died after testing positive for COVID-19 and being treated for pneumonia, has asked for his epitaph to read: “I told you I was old”, in reference to comedian Spike Milligan’s famous tombstone that said “I told you I was ill”.

Although the public were unable to pay tribute to him in person, an online condolence book has been signed by thousands of people.

“Someone will have to make extra cake and sandwiches, and it won’t be me.”
Today we celebrate the life of our hero. We will be following Captain Tom’s wishes by enjoying a cup of tea and a slice of Victoria sponge cake. Please join us as we raise a cup to him. pic.twitter.com/c9F1xBFL9a

And others honoured the centenarian in their own ways from home.

The Arnold family from Hull hung flags in their windows alongside pictures of Sir Tom, while Alfie McAnespie, 13, rang the bell 100 times at a church in Chicksands, Bedfordshire, in honour of the 100-year-old.

As well as staying at home to protect the NHS, the Moore family have asked people to plant trees in Captain Sir Tom’s memory.

They tweeted after the service asking people to raise their “cups of tea” to him, adding: “Today we celebrate the life of our hero”.

Image: Order of service for the private ceremony at Bedford Crematorium

The family hopes the Trees for Tom initiative will result in a wood in his home county of Yorkshire and the reforestation of part of India, where he served during the Second World War with the Duke of Wellington Regiment.

It later merged with two others from Yorkshire, becoming the Yorkshire Regiment, with Sir Tom becoming an honorary colonel last August.

The funeral cortege of Captain Sir Tom Moore set off from his home in Marston Moretaine, travelling to Bedford Crematorium

He was knighted in July following his heroic fundraising efforts.

Once COVID-19 restrictions permit, his family plans to inter Captain Sir Tom’s ashes in Yorkshire, with his parents and grandparents, in the Moore family plot.