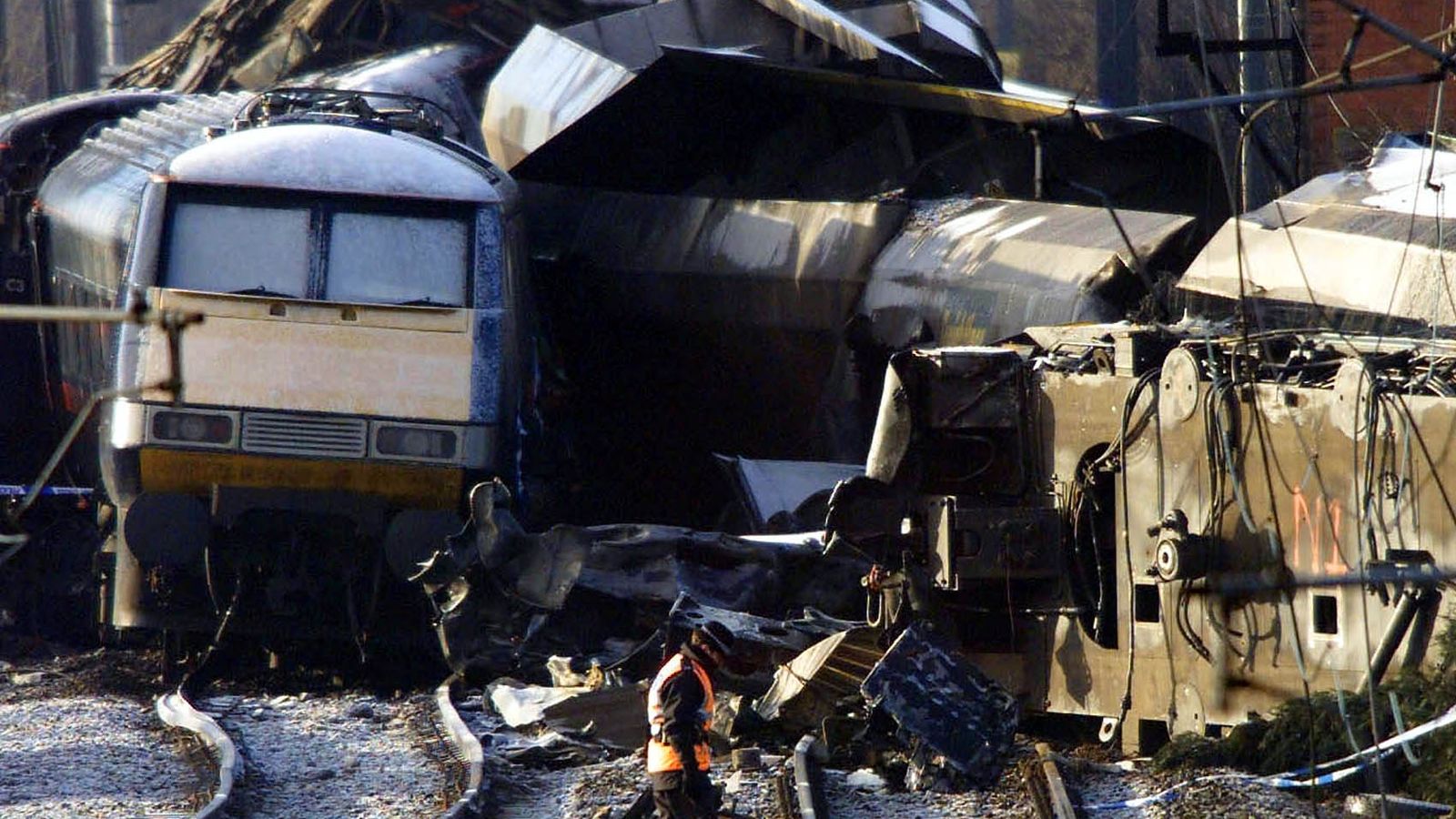 The widow of one of the 10 people who died in the Selby train crash – which happened 20 years ago today – says lessons have not been learned from the disaster.

Mary Dunn’s husband Steve, a locomotive driver, was killed when a high-speed passenger train was derailed into the path of his oncoming freight train after it hit a Land Rover and trailer that was stranded on the tracks at Great Heck, near Selby in North Yorkshire.

The driver of the Land Rover, Gary Hart, was given a five-year jail sentence for causing death by dangerous driving. A jury heard he had fallen asleep at the wheel and drifted off the M62 motorway and down an embankment, with his vehicle coming to rest on the East Coast Main Line.

Image: Gary Hart was given a five-year jail sentence for causing death by dangerous driving

With research from the AA Charitable Trust suggesting 13% of drivers in the UK admit falling asleep at the wheel, Mrs Dunn said more could be done to cut the number of accidents – including the creation of additional rest areas.

She said: “The accident rate hasn’t really altered, I’ve always felt that was one of the lessons we could learn, and it just hasn’t been.

“Rather than having full service areas, just have some rest areas where there might be a coffee machine. Get out, have a walk, have a sleep, and you basically can break into your journey. That’s all I ask.”

Two online commemorative events are being held today to mark the anniversary of the disaster – one at 10am from Newcastle Central Railway Station and the Great Heck Memorial Garden, and another at 2pm from Selby Abbey.

Corinna Reed, 44, will be one of those logging in to the service from her home in Morpeth, Northumberland, to remember the crash that left her seriously injured and fearful that she would never be able to have children.

She believes her life was saved by her decision to move carriages in search of a warmer seat for her early morning journey from Newcastle to London for her work as a cabin crew member with Virgin Airlines.

Image: Ten people were killed in the train crash on 28 February 2001

The carriage she moved from was next to the buffet car, where many of the fatalities occurred.

Mrs Reed says the aftermath of the initial impact with the Land Rover was like being in a washing machine: “Just going over and round and round, and I just remember thinking ‘I’m going to die’.”

Since the accident she has fully recovered, and is now a mother of four children.

She said is grateful to train operator GNER and her then employer, Richard Branson, for their support after the crash – and to a therapist who helped her through the longer-lasting psychological effects.

“I like to remember in my own way, every year, the people who didn’t make it that day. I feel so sorry for their families,” she said.