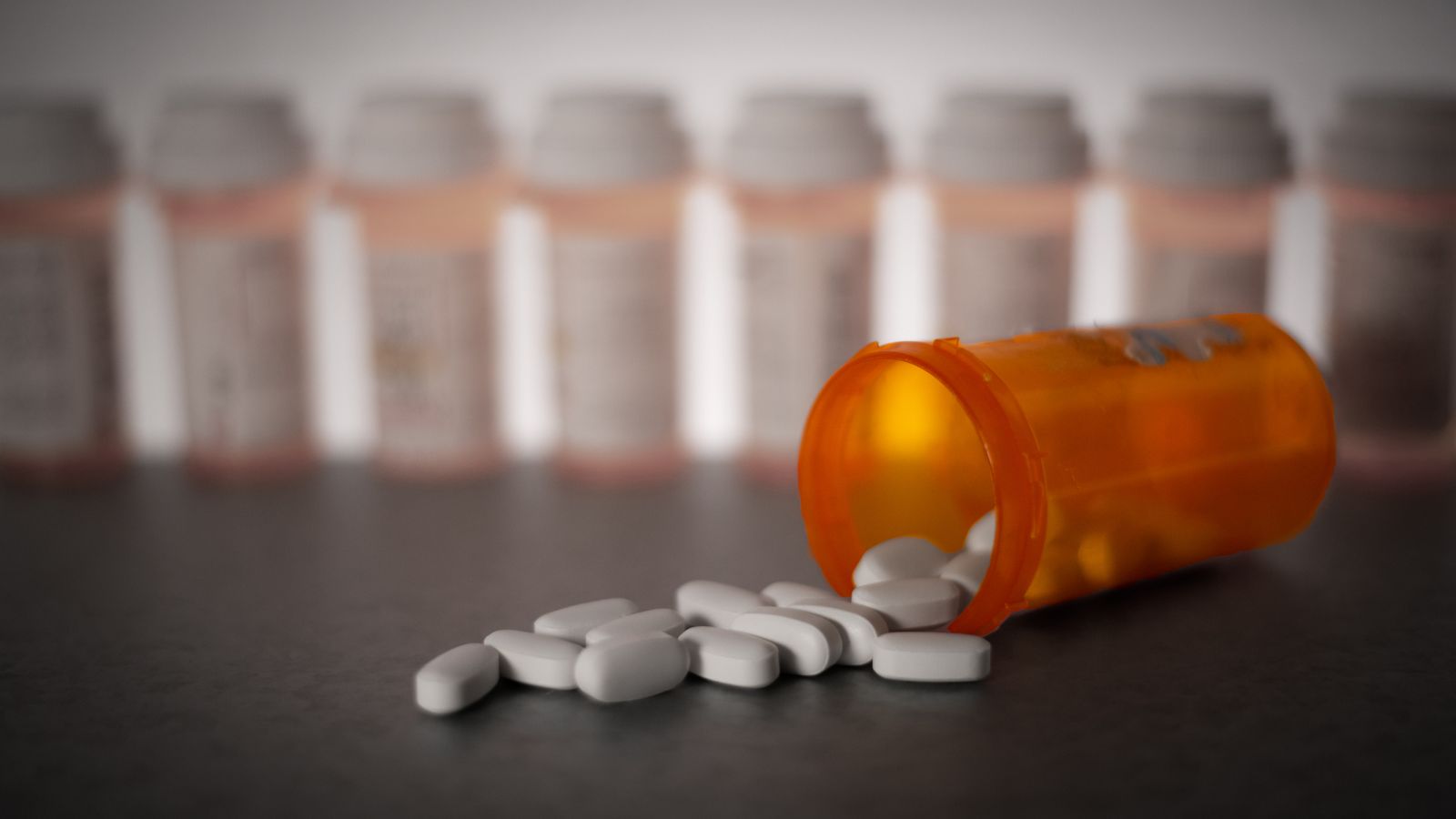 Purchasing benzodiazepines, or “benzos”, without a prescription is against the law and amounts to possession of a Class C drug in the UK.

Figures show a rise in the number of diazepam and alprazolam tablets being bought illegally in the UK and sent for testing to a public laboratory.

WEDINOS, the laboratory run by Public Health Wales, tests drugs sent in anonymously as part of a harm reduction service.

Image: Purchasing benzodiazepines without a prescription is against the law

While it is not a way of quantifying drug use in the UK it can monitor drug trends.

Figures sent to Sky News from WEDINOS show the number of benzodiazepines sent in increased during the pandemic year, by 25% in 2020, compared with the year before.

Worryingly, there has also been a rise in the level of substitution compared with 2019.

In the last quarter of 2020, for example, less than half of diazepam and alprazolam (or Xanax) samples tested actually contained those substances.

Anecdotal evidence would suggest there may also be a rise in people purchasing benzodiazepines online.

One social media user, who runs an account that has drug references but does not sell drugs and often gets mistaken for a dealer, told Sky News he was being approached to supply benzos more regularly since the start of the pandemic.

“Since the pandemic I’ve gotten three to four messages a week asking me to supply benzos as they can’t get them from a doctor,” he said.

“Prior to the pandemic I’d be asked once a fortnight or so.”

There are concerns that people may be self-medicating online as a result of poor mental health.

Cathy – not her real name – was addicted to diazepam, bought on the internet, for years.

Image: ‘Cathy’ was addicted to diazepam for years

She was treated at the Addiction to Online Medicine clinic in London and is finally clean after several attempts in rehab.

She described her lowest point, due to taking the drugs, as the loss of her memory and “the depression”.

“I couldn’t get out of bed,” she said. “I just felt like life was pointless – I think that was lowest point for me. Really realising that I had no desire to live.

Benzos are easily accessible to buy, mainly from abroad, on the internet and on social media sites such as Instagram, Snapchat and Twitter.

Sky News found sellers were wrongly insisting that it is legal to buy benzodiazepines without a prescription.

In fact, in the UK, it amounts to possession of a Class C drug.

Paul Hannaford is a former drug addict who travels to different schools across the UK giving talks about his experiences and trying to raise awareness.

He describes coming off benzos as being “harder than coming off heroin”.

Image: Benzodiazepines are becoming easier to get hold of

He is worried that the impact of lockdown could be fuelling a rise in use of drugs among young people.

“There are more drugs being sold online to young people now than ever,” he said. “You can access any site… they don’t know what they’re buying these children.

“I’ve heard via certain social media platforms via parents, even students themselves, that they have started buying drugs online and getting involved with benzos.

“And their behaviours are all over the place, they can’t function properly, their education has gone out the window.”

Dr Owen Bowden-Jones, consultant psychiatrist from the Addiction to Online Medicine clinic in London, said the clinic had a mixture of patients, “depending on age”.

“The younger people at the clinic tend to be more men, and as the age increases we tend to see more women,” he said.

“And that’s probably because the younger group are using substances recreationally, they’re adding it to other drugs that they’re using.

“As the age increases we’re seeing people self-medicate, so they’re self-medicating for anxiety or for trauma, or for depression, and those experiences are more common in women.”

Dr Bowden-Jones is also warning about the dangers of fake drugs bought on the internet.

“They will include tablets with variable dosing often with lots of impurities, and most worrying often with other substances that have been substituted,” he said.

“The real difficulty is if you take one tablet and you think, well, it seems a bit weak, it hasn’t really had much effect.

“Then you might take a second tablet, that tablet might actually be much, much stronger, and so the risk is that people overdose.

“They become rapidly intoxicated, and they collapse.”

In a statement, Twitter said: “Keeping people safe on Twitter is a top priority for us and it is against our rules to use our service for any illegal activities.

“We remain vigilant and take robust enforcement action where we identify violations of our rules.”

Image: Drugs are being sold to young people online more than ever before, according to one doctor

A spokesperson from Facebook, which owns Instagram, said: “Buying and selling non-medical or prescription drugs is strictly against our policies and we are investigating the accounts brought to our attention.

“We work closely with the police to detect and keep illegal material off our platform and urge anyone who sees this kind of content to report it so we can take the appropriate action.

And Snapchat responded saying similar, that it is proactively making it hard for the sale of illegal drugs and are dedicated to stopping it, whilst continuing to invest in ways to improve response.

It also has an in-app reporting tool which works 24/7, and have intentionally made it difficult for strangers to identify or contact people they do not know.

It added that its features make it harder for dealers to market or offer drugs to large audiences on Snapchat than on other platforms.

It also launched a feature called “Here for You” earlier this year, which includes warnings on the impact drugs can have on mental health.