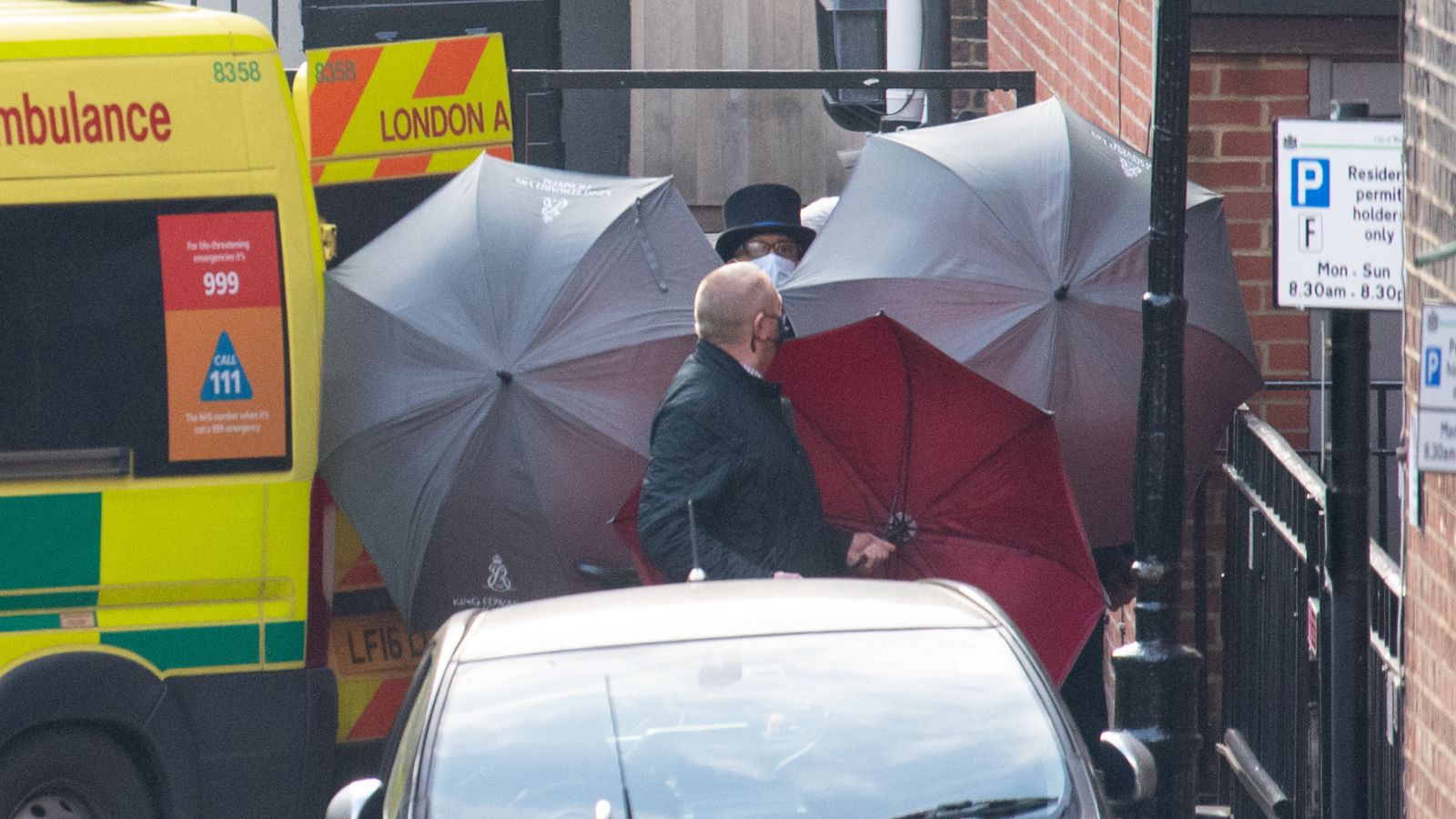 Prince Philip has been moved to a different hospital where he will continue to be treated for an infection and undergo further tests.

The Duke of Edinburgh, 99, was admitted to a London hospital just under two weeks ago as a “precautionary measure” after feeling unwell.

A Buckingham Palace statement said: “The Duke of Edinburgh was today transferred from King Edward VII’s Hospital to St Bartholomew’s Hospital where doctors will continue to treat him for an infection, as well as undertake testing and observation for a pre-existing heart condition.

Image: The duke has been transferred about 3.5 miles to St Bartholomew’s Hospital

“The Duke remains comfortable and is responding to treatment but is expected to remain in hospital until at least the end of the week.”

Prince Philip was shielded from public view as he left the hospital on Monday morning.

Umbrellas were held up as he made his way into a waiting ambulance, at the rear of the hospital, to be taken to St Bart’s, where uniformed officers from the City of London police were positioned.

The duke’s condition is not related to coronavirus.

St Bart’s is described on its website as an “internationally-renowned” hospital which is a “centre of excellence for both cardiac and cancer care”.

Image: The 99-year-old, pictured last summer, is expected to stay in hospital until at least the end of the week. Pic: Tim Rooke/Shutterstock

Last week, Prince Edward told Sky News his father was doing “a lot better” and that the family were keeping their “fingers crossed”.

The prince said he was “looking forward to getting out, which is the most positive thing”.

Asked if the duke was frustrated, Prince Edward added: “Just a bit! I think that gets to all of us, and then, you can only watch the clock so many times and the walls are only so interesting.”

His father has received “some brilliant and lovely messages” from the public which have been passed on to him, Prince Edward said.

The duke was driven to the central London hospital on 16 February, with a royal source saying he walked in unaided.

Prince Charles was pictured in a face mask going to visit a few days later and stayed for about half an hour.

Image: Prince Charles visited his father in hospital on 20 February

Philip has suffered a number of ailments in recent years.

In 2011 he had a stent to treat a blocked coronary artery, a year later he was treated for a bladder infection – which forced him to miss the Queen’s Diamond Jubilee celebrations.

And in 2013 he had exploratory surgery on his abdomen.

The last time he was in hospital was December 2019, when he spent four nights being treated for a “pre-existing condition”.

Philip – who turns 100 in June – retired in 2017 after decades of public duties and thousands of engagements.

He now rarely appears in public and was last seen in July 2020 when he transferred his role as colonel-in-chief of The Rifles to the Duchess of Cornwall.

Earlier this month, the palace confirmed they had both received their first dose of a vaccine.

Analysis: Switching to NHS care is in the duke’s best interests

No one expected the Duke of Edinburgh to come out of the King Edward VII hospital only to be taken to a different hospital across London.

But instead of heading back to Windsor he is now in St Bart’s, renowned for its cardiac care.

There is no doubt that the decision to move the 99-year-old to an NHS hospital for treatment for both an infection and a pre-existing heart condition has ramped up concern about his health, but speak to those in the medical profession and they’ll explain why he’s now better off in an NHS hospital rather than staying in the private one.

Cardiologist Dr Aseem Malhotra explained to me that while private care can be very good at fast-tracking people who have very stable conditions like hip and knee operations, or minor conditions, an NHS hospital like St Bart’s is better set up to deal with patients who are particularly unwell or need extra care.

It has the infrastructure such as dedicated intensive care, experienced staff used to dealing with emergencies, and the best levels of cardiac monitoring.

Yes, more days in hospital are inevitably a worry given Prince Philip’s age, and his doctors clearly feel that he isn’t well enough to return to Windsor.

But it’s also likely that his medical team would only put him forward for further treatment with the belief and hope that it is likely to be successful.

They would not want to put him through any discomfort if they didn’t think he would benefit from more tests, observation and potentially procedures.