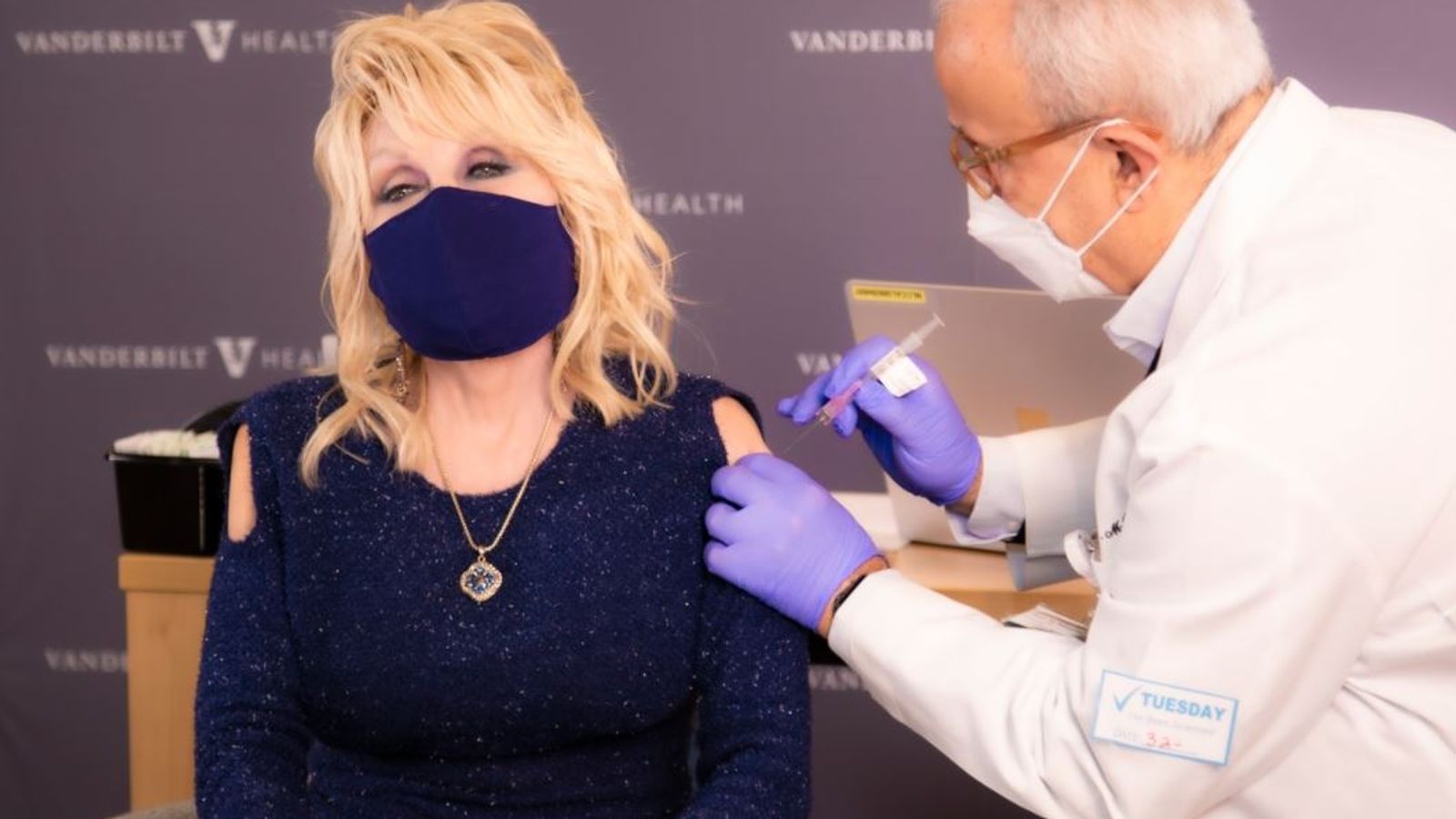 Celebrities including comedians and former rock stars have been sharing their experiences of receiving the coronavirus vaccine – as they hope to encourage others to get the jab.

The vaccination programme – hailed as the largest in British history – beganwith healthcare workers, people living in care homes and the elderly, but will ramp up to include other demographics.

Buckingham Palace confirmed that the Queen, 94, and Prince Philip, 99, had received their first doses of the vaccination in January, in a rare announcement giving details of the royals’ private health matters.

And both Pope Francis, 84, and ex Pope Benedict, 93, have also received their first doses as part of a Vatican vaccination programme.

As well as Her Majesty and the Popes, here are some of the celebrities to receive a coronavirus jab.

The US singer, 75, got a Moderna jab at Vanderbilt Health in Tennessee, as a photo was posted on her Twitter account of the star having the inoculation along with the words “Dolly gets a dose of her own medicine”.

This was a reference to Parton helping to fund the Moderna vaccine – last year she donated $1m (£720,000) to Vanderbilt University to help find a coronavirus cure.

In a Twitter video on Tuesday, she urged her followers to get vaccinated if they were eligible, and said she was “old enough” and “smart enough” to have her shot, which she insisted did not hurt.

Parton also changed the words to her famous track Jolene for the occasion.

Image: Actress Joan Collins pictured on her balcony on the 75th Anniversary of VE Day in 2020

Dame Joan Collins, 87, shared an Instagram post on 9 January, thanking two NHS staff for their work administering the vaccination and assuring fans that it was “painless and seamless”.

She said she had received the Oxford University/AstraZeneca jab at London’s Bloomsbury Surgery that morning – the same day as the Queen.

“Suitable that two Queens got it on the same day,” one comment under Dame Joan’s post read.

Not much information has been given about Sir David’s COVID-19 jab – his time on Instagram was brief in 2020, so there are have been no social media updates from the naturalist and broadcaster.

However, it has been confirmed that he has had his first dose.

It is not known which of the approved vaccines Sir David received.

‘I’m only in my late 30s’ jokes Dame Edna actor

The 86-year-old Australian performer who gave the world Dame Edna Everage and Sir Les Patterson made light of receiving the vaccine, insisting he wasn’t really old enough to qualify.

He joked: “I don’t think I have underlying issues. In fact, I’m an out-of-work actor and I’ve had to give the performance of a lifetime pretending to be old enough to get the vaccine.

Image: Prue Leith was given the COVID-19 jab in Chipping Norton. Pic: Twitter/@PrueLeith

The Great British Bake Off judge said she was “absolutely delighted” to be one of the first called in to receive the jab in December.

The 80-year-old chef posted a photo of herself having the jab in Chipping Norton, Oxfordshire, on Twitter, saying later she could not feel the needle going into her arm.

“It was so efficient… it’s amazing,” she said afterwards.

She added: “I’m thrilled to get it… they rang me up and asked if I wanted it and I said ‘yes!'”

And, keen to encourage others to follow her example, she said: “It’s really important – I can’t believe there’s anyone who doesn’t want to [get the vaccine]. It’s important we all do it.

“The sunny uplands are actually visible, which I’ve never felt before.”

Image: Sir Ian McKellen got his COVID-19 vaccine in London

The Lord Of The Rings actor said he felt “euphoric” after being vaccinated at Queen Mary’s University Hospital in London.

The 81-year-old was photographed having the vaccine administered to him by a medic in December.

He said all elderly people should ensure they get the jab, adding it was “painless”.

“Anyone who has lived as long as I have is alive because they have had previous vaccinations, the take up amongst the older generation will be 100% – it ought to be – because you’re having it not just for yourself but for people who you are close to – you’re doing your bit for society.

“Of course, it’s painless… it’s convenient, and getting in touch and meeting NHS staff and saying thank you to them for how hard they’ve been working is a bonus, I would have no hesitation in recommending it to anyone.

“I feel very lucky to have had the vaccine.”

The 92-year-old performer said he was happy to finish the year “with hope” after getting his first COVID-19 jab in Epsom, Surrey, in December.

He said: “I couldn’t believe it when they called me and said, ‘it’s next week and then the next one is in January’ – and here I am.

The entertainer added: “I’m hoping it’s going to make me live a bit longer! And seeing my grandchildren and children growing up. The whole thing means a great deal to me.”

The father of comedian Jack Whitehall shared a photo of himself getting vaccinated on 14 December on Twitter.

The 80-year-old praised the “brilliantly organised” Guy’s and St Thomas’ Trust London and the “wonderful NHS staff” who helped administer the jab.

Image: Marty Wilde was one of the first celebrities to get vaccinated

The rock ‘n’ roll singer said he got one of the first vaccinations as it was “the right thing to do”.

The 81-year-old singer – who scored a string of hits in the 50s and 60s with songs such as Teenager In Love – was given the jab on 10 December at Lister Hospital in Stevenage.

Speaking afterwards, Mr Wilde said: “Having just had my COVID injection I can honestly say it was an easy experience, if that’s the right word. It was painless and the staff were great.”

On why he wanted to be among the first to have it, he said: “Because I think it is common sense.

“You look at the amount of people who have died over this last six to eight months and then you think how you can protect yourself. It’s common sense.

“The whole thing is just the right thing to do. You need an injection.”

The singer and guitarist, whose daughter Kim found fame in 1981 with Kids In America, got an appointment after ringing the NHS hotline.

The 82-year-old Emmerdale star got his vaccination in Louth, Lincolnshire, in December.

He said: “Getting my COVID vaccination was incredibly simple and painless.

“I feel incredibly lucky to have had it & would like to thank all the wonderful NHS staff for making it happen.”

Image: Dame Judi Dench says she has got off to a ‘great start’

Dame Judi Dench said it was a “great start” after confirming she had received her first jab.

The Oscar winner, 86, told BBC News she had received her vaccination in early January.

“I think my next is in something like 11 weeks time. That’s a great start.”