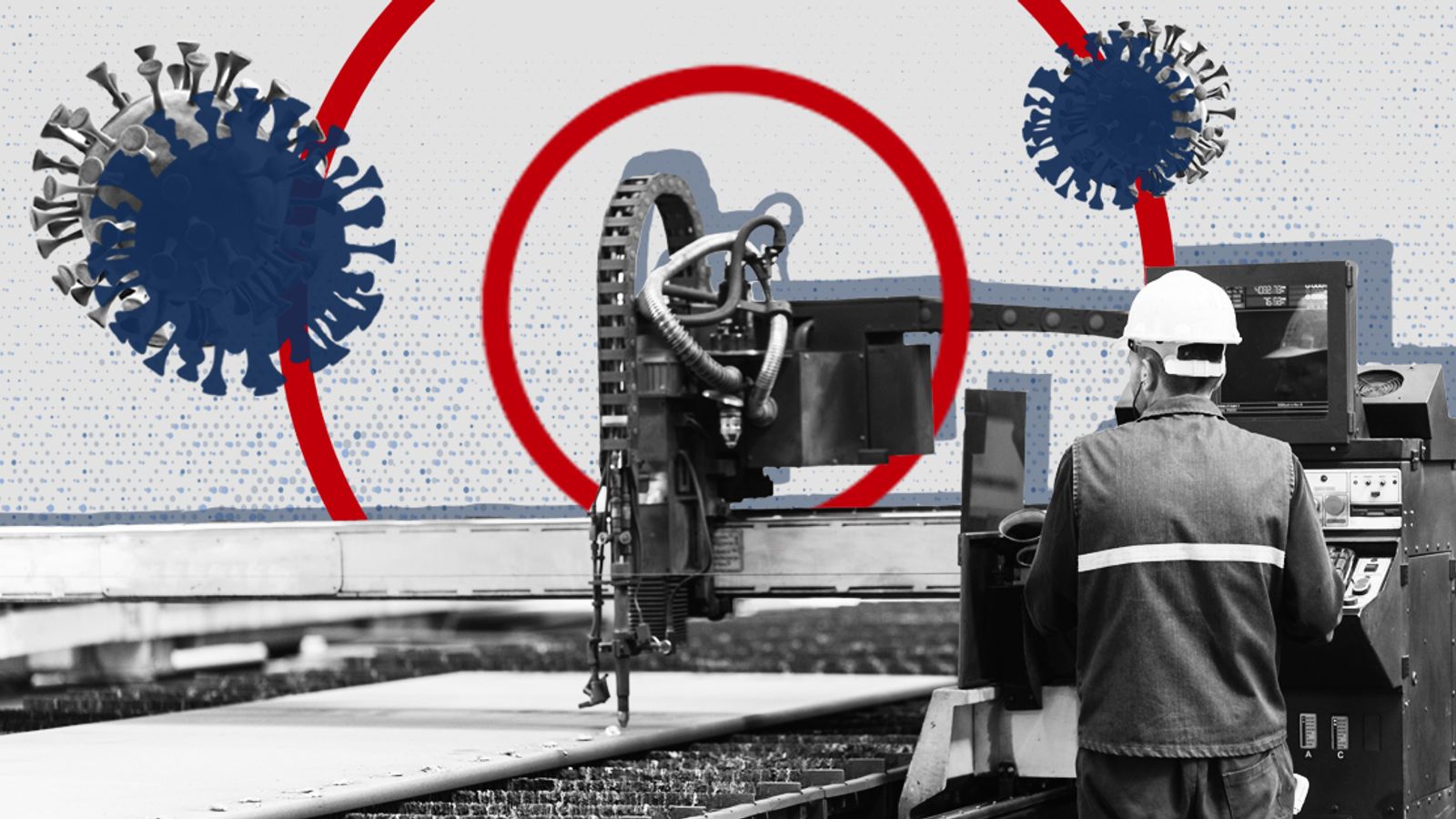 Much of Wednesday’s budget (summed up here) focused on the pandemic, with some schemes being extended and some new ones introduced to the tune of an extra £65 billion, bringing the total spend on COVID-19 support since March 2020 into the next financial year to £407bn.

Here are all the COVID-related announcements:

Mr Sunak has extended the furlough scheme to 30 September. It was due to expire at the end of April after starting last March when the crisis began.

Wages for millions who are unable to work due to the restrictions will continue to have up to 80% of their salary subsidised by the government, with a maximum of £2,500 a month.

Watch live reactions to the budget

This will gradually be lifted, with the government reducing its contribution to 70% from July and employers having to pay 10% for hours not worked.

In August and September, the government will pay 60% and employers 20%.

About 4.7 million people are currently on furlough, with the most – 1.2 million – in hospitality.

A further 600,000 self-employed people who have been excluded from support measures until now will be eligible to claim grants for the February to April period from the end of April, then for May to September from late July.

They will be worth 80% of three months’ average trading profits up to £7,500 for those who saw their turnover fall by 30% or more.

For people whose turnover fell by less than that, they will get a 30% grant.

Newly self-employed people were previously unable to benefit from the scheme but the Treasury said that as tax return data from 2019-20 is now available, they will also benefit.

A special edition of the Sky News Daily podcast covering the budget will be available from 7pm.

Throughout the pandemic we stepped in to protect jobs and livelihoods. This Budget continues that support and sets out our plan for growth.

We’re investing in innovation, skills and infrastructure to build back better, level up and unleash the potential of the United Kingdom. https://t.co/TS5zwKQhBs

A £5bn grant scheme is being released to help businesses that have taken most of the lockdown flack.

Non-essential shops, which are due to open first, hopefully from 12 April if the roadmap meets is target dates, will get grants of up to £6,000 per premises.

Hospitality and leisure businesses, including personal care and gyms, will have access to grants of up to £18,000 each when they open.

Image: Chancellor of the Exchequer Rishi Sunak holds the budget box outside his office in Downing Street in London

Loans for businesses to reopen

Businesses of any size will be able to take out loans of between £25,000 and £10m until the end of the year.

The government will make a guarantee to lenders of 80%.

The £20-a-week temporary increase in universal credit will be extended for a further six months.

Introduced during the first lockdown last March, it was due to end on 31 March and is worth more than £1,000 a year for about six million families.

For those who receive working tax credit payments, they will get the equivalent of six weeks’ payment with a lump sum of £500. Mr Sunak said the way it works means one payment is needed.

The retail, hospitality and leisure industries will have the 100% business rates holiday introduced last year extended until the end of June.

For the remaining nine months of the financial year after that, they will be discounted by two thirds, up to £2m for businesses that had to close due to the pandemic.

There will be a lower cap for those who have been able to stay open during the pandemic.

For hospitality and tourism, the 5% reduced VAT scheme will be extended until 30 September.

For the six months after that VAT will be at 12.5% before rising to the original 20% in April.

Due to the large numbers of house sales under the stamp duty holiday, the scheme will be extended for the first £500,000 until 30 June.

Image: The stamp duty holiday has encouraged a boom in house sales

There has been a significant rise in domestic abuse during the pandemic.

The chancellor has said a further £19m sum will go to domestic violence programmes and a network of respite rooms for vulnerable homeless women will be piloted.

Help for culture and sports

A £700m pot of cash will be available to help the arts, culture and sports to reopen as restrictions ease.

Sports will get a £300m boost, with a “significant chunk” going to cricket as it prepares to resume this summer.

An extra £500m will go towards the film industry to help them restart.

There will be no rise in alcohol or fuel tax duty for the next financial year.

Image: The chancellor announced a spending boost for the vaccine programme in Wednesday’s budget

A further £1.65bn will be allocated to the UK’s vaccine rollout as the government plans to offer all adults their first dose by 31 July.

As part of that, £33m more will be invested in vaccine testing and development to protect against future outbreaks and variants.

And there will be another £22m for a “world-leading study” to test the effectiveness of combining different vaccines.

National Audit Office figures show the UK has spent £12bn on the vaccine rollout so far, including £2.9bn for 267 million doses of five different vaccines.