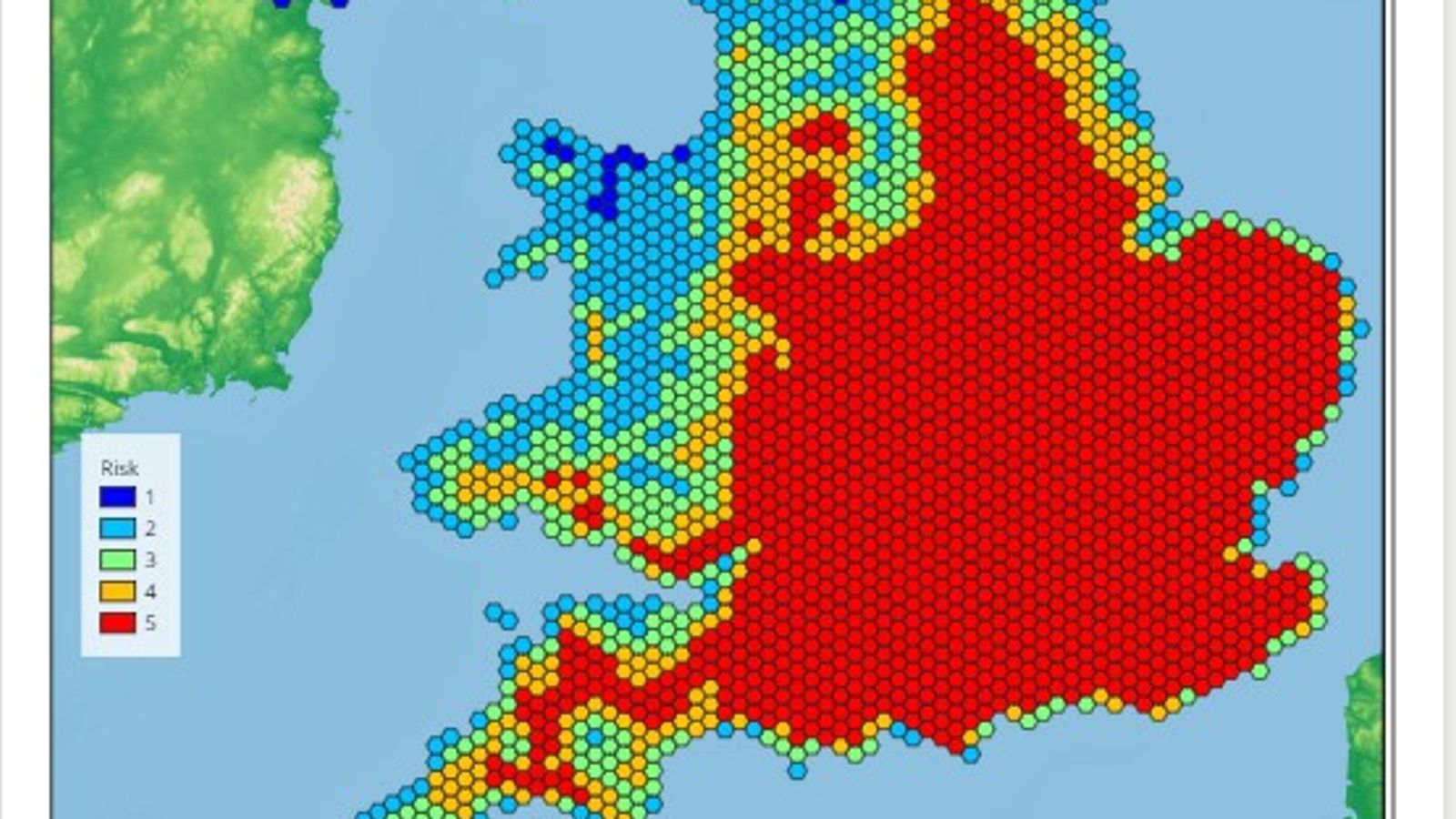 A “game changer” climate map has been drawn up by the National Trust, showing the threat extreme heat, humidity and landslides will have on its most precious British properties and landscapes.

The map is based on a “worst-case scenario” of a failure to drive down carbon emissions over the coming decades, but is intended to be a flagging tool to highlight potential hazards surrounding a heritage or countryside site.

It has been drawn up to help the charity intervene to protect its sites, outlining the effect posed by climate impacts including rising heat and humidity, landslides, high winds, and floods, and how they could change by 2060.

Image: Coastal erosion and flooding will increase in Northern Ireland, potentially leading to more landslides around locations such as the Giant’s Causeway. Pic: Patrick Swan/Design Pics

The map reveals that, without action on emissions, the number of National Trust sites in areas at the highest threat level from climate impacts could more than treble from 3,371 (5%) to 11,462 (17%) over the next 40 years.

The map shows high heat and humidity will hit the southeast of England, with a third of National Trust sites in the region experiencing at least 15 days above 30C (86F) a year.

Storm damage, landslides and flooding will also become common and more widespread, particularly in the north of England and Wales.

Coastal erosion and flooding will increase in Northern Ireland, potentially leading to more landslides around locations such as the Giant’s Causeway.

Identifying areas at risk will help the National Trust pinpoint locations that could need interventions, such as planting trees or restoring peat bogs to hold or slow the flow of water to prevent flooding, and more shade could be needed to protect areas at risk of high temperatures.

Image: National Trust bosses say the map ‘paints a stark picture of what we have to prepare for’. Pic shows Stourhead in Wiltshire, taken by Guy Heitmann/Design Pics

The map will ensure that, under a commitment to plant or establish 20 million trees to tackle climate change, trees go in the places they are needed most, the charity said.

National Trust director for land and nature Harry Bowell said: “This map is a game changer in how we face the threat climate change poses to the places we care for.

“While the data draws on a worst-case scenario, the map paints a stark picture of what we have to prepare for. But by acting now, and working with nature, we can adapt to many of these risks.”

The National Trust is working in partnership with government bodies to plot all cultural heritage sites in the UK, and has unveiled the map ahead of key UN climate talks in Glasgow to drive international action on climate change – which if successful would avoid the map’s worst case scenario.

The trust says staff are already taking action to cope with rising temperatures, such as at Ham House in London, which could often face 40C (104F) heat by 2040, where heat-tolerant plants are being grown and garden working hours have shifted to start and finish earlier to avoid summer afternoon heat.

At Lyme Park in Cheshire, which was hit by a major flood in 2019, the team is undertaking tree planting on moorland to slow the flow of water and reduce flooding risks.

At Mount Stewart, Northern Ireland, where rising sea levels in Strangford Lough have contributed to coastal erosion, the carpark has been relocated and a shelter-belt from incoming sea water created.

And at Malham Tarn, in the Yorkshire Dales, an otherwise sound 18th century barn collapsed due to soil shrinkage, but teams can now intervene with moves such as tree planting and using certain plants to manage the water table.

A 16th century listed farmhouse in Wales, Dyffryn Mymbyr in Snowdonia, has been protected against the impact of increased driving heavy rainfall by installing “slate hanging” on the exposed end of the building.

Image: The trust is working in partnership with government bodies to plot all its cultural heritage sites in the UK

The map plots the impacts of extreme heat and humidity, landslides, coastal erosion, shrinking and shifting ground due to wet and dry conditions known as “soil heave”, and high winds, in 2020 and 2060.

It uses data from a number of sources and plots them in 5km hexagonal grids across England, Wales and Northern Ireland.