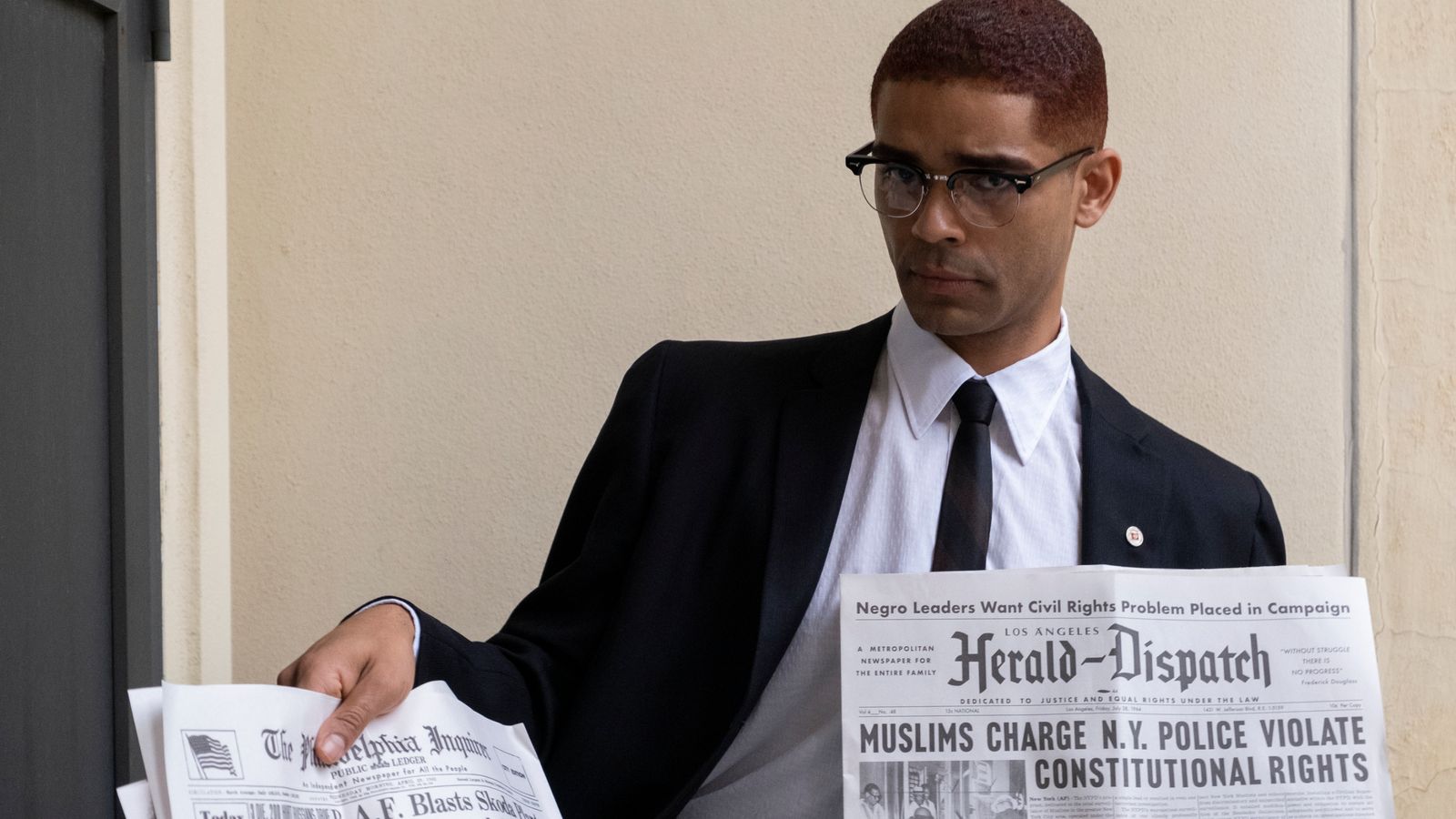 The first nominations for this year’s BAFTAs have been announced – and for the first time, all the actors in the Rising Star category are British.

Nominees for the award, which honours young or up-and-coming acting talent and is the only one voted for by the public, have been revealed ahead of the full BAFTA shortlist announcement on Tuesday.

Image: Ben-Adir is in the running for this year’s BAFTA Rising Star award

Ben-Adir, who plays minister and activist Malcolm X in Regina King’s recent directorial debut One Night In Miami, told Sky News’ Backstage podcast that it’s a great group to be part of – and that he and Dirisu have known each other for a while.

“We’ve come through the ranks together, we sort of graduated from drama school at the same time,” he said. “So he’s been nicking jobs off me for the last 10 years, I like to say.

“Some of the other guys are a bit younger and so I’m seeing their movies and their work for the first time in the last month, and it’s a cool group.”

While TV fans will know Ben-Adir from shows including Vera, Peaky Blinders and Netflix’s genre-bending drama The OA, the British Academy has recognised him for his work in film.

One Night In Miami, a fictional account of a night depicting Muhammad Ali, Malcolm X, Sam Cooke and Jim Brown gathering to discuss their roles in the civil rights movement and cultural upheaval of the ’60s, has received critical acclaim and early awards season success.

Ben-Adir describes the process of making the film – from his first audition to the end of filming – as a “beautiful whirlwind”.

“There was just so much work to do and not very much time to do it in,” he said.

“So it was about making a plan and I had a lot of help, I had a lot of wonderful dialect coaches. I’ve been working with an incredible acting teacher for the last four years and kind of retrained as an actor, in a way.

“And so I had a lot of help and I just went into a very, very deep preparation… I turned all my phones off and just tried as much as I could to just disappear into the prep.”

Coincidentally, the actor was also playing another political figure – Barack Obama – in The Comey Rule, a drama about former FBI director James Comey and his firing by Donald Trump, while making One Night In Miami.

He says while it meant he was working hard, he was still enjoying himself.

“My memories of it were it was such a joyous experience, it was so amazing to be that occupied, that stimulated, that there was so much going on,” he said.

“In a weird way, you become very present when there’s that much going on and the task sort of felt that significant because it’s Malcolm X and, you know, you want to do some honour to that.” He laughs. “Otherwise you could be in trouble.

“I just threw everything I had at it – full enthusiasm.”

King has previously won an Oscar for acting and with One Night In Miami, she may be in the running to get one for directing as well.

Ben-Adir says her decades of experience as an actor made the film a pleasure to work on.

“Working with Regina and the process that she allowed us to have, the atmosphere that she created on set, and her deep sense of empathy and her intelligence and understanding of emotional performance in the way she helped me nuance Malcolm throughout the journey of the film was really, really special,” he said.

“I feel so grateful to have had the opportunity to work with her. It really is nuts.”

The winner of the EE Bafta Rising Star Award will be announced at the BAFTAs on 11 February. Hear more about the nominees on the latest episode of Backstage, the weekly film and TV podcast from Sky News

COVID-19: All businesses in England to be given rapid coronavirus tests free of charge