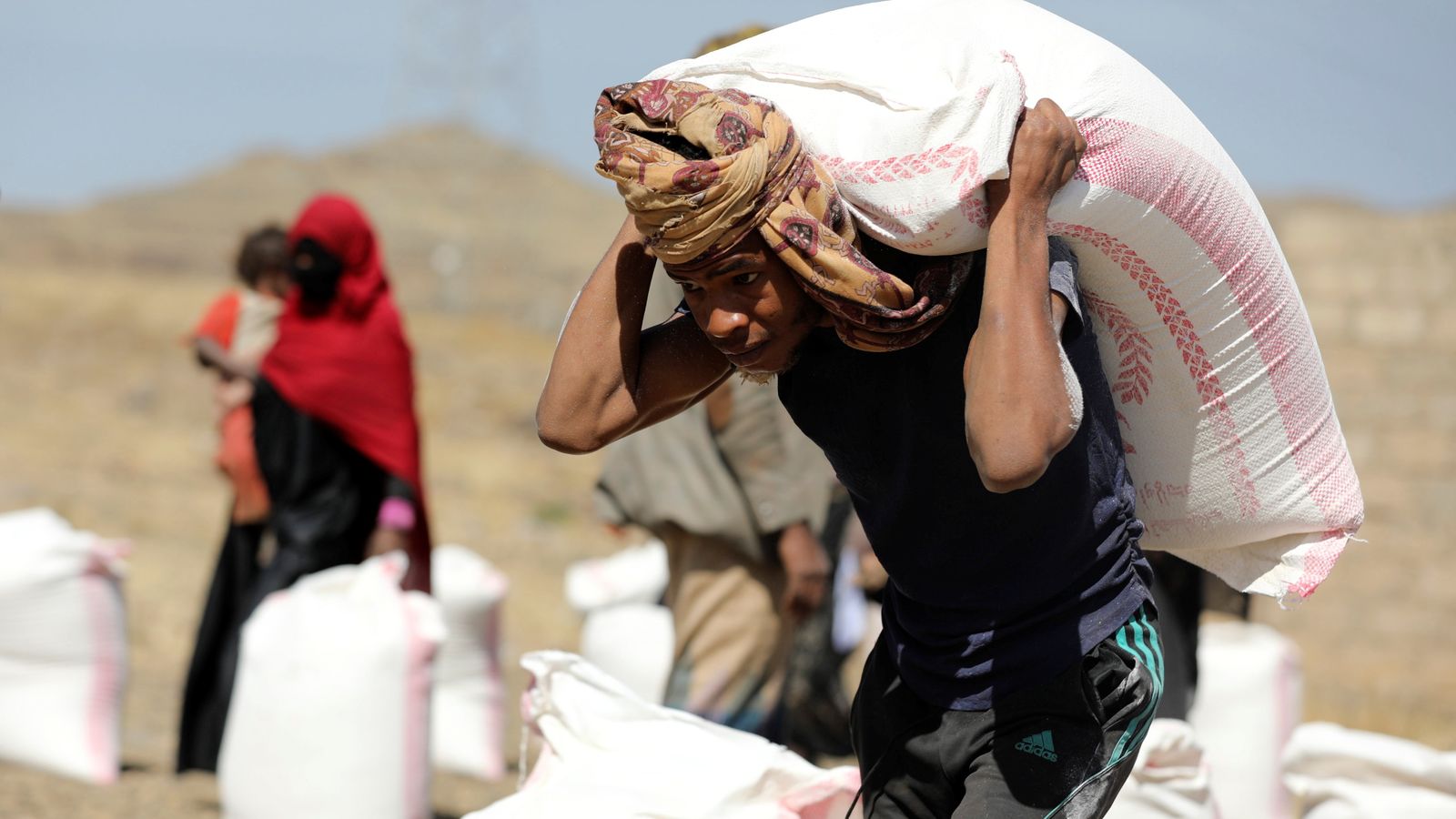 Tens of thousands of lives will be lost as a result of cuts to the UK’s aid budget, the chief executive of Oxfam has told Sky News.

Oxfam is one of more than a hundred UK charities that have written to Prime Minister Boris Johnson condemning a government decision to cut aid to Yemen.

Oxfam chief executive Danny Sriskandarajah, one of the signatories of the letter to Mr Johnson, told Sky News: “Tens of thousands of lives are going to be lost as a result of this funding being reduced.

“The UK government has been proudly leading the effort to provide humanitarian assistance in places like Yemen.

“It’s a betrayal of not just the promises we made to the world’s poorest and most needy. It’s a brutal betrayal of British values. It’s an undermining of this government’s stated aim to be global Britain, to provide the sort of positive leadership.

“And arguably, worst of all, it’s a particularly callous decision because this government has actually increased the sales of British arms to Saudi Arabia, which is a party to the conflict (in Yemen).

“This is almost the worst possible news we could have expected when it comes to the cuts to the aid budget.”

Image: It is reported that British aid to Syria could drop by almost £100m

The Foreign and Commonwealth Office (FCO) did not dispute the reported figures when asked by Sky News for a response, and said COVID-19 had “forced” it to take “tough but necessary decisions”.

It said it was “temporarily reducing the overall amount we spend on aid”.

The report that budgets could be slashed in countries other than Yemen has been criticised by politicians and charities, with some warning there will be huge impacts on issues such as terrorism, migration and refugee crises.

Labour’s Preet Kaur Gill, shadow secretary for international development, said: “This is a devastating reminder of the real world impact the government’s politically motivated decision to abandon its manifesto commitment on aid will have on the world’s most vulnerable people.

“Cuts in support to countries in the midst of multiple humanitarian crises would cause devastation, leading some of the world’s most vulnerable people to starve, stretched healthcare systems to collapse and access to clean water stripped away. Make no mistake, people will die.”

Tory MP and chair of the House of Commons Defence Select Committee Tobias Ellwood also joined the criticism, telling Channel 4 News that terrorist groups such as Islamic State and Boko Haram will benefit from the UK stepping back.

“Perhaps we should explain it to the British people that extremism, terrorism, refugee crises, migration… will all be affected when we take these retrograde steps,” he said.

Starmer clashes with Johnson over Yemen

It comes after a recent report by the UK’s Disasters Emergency Committee (DEC) found the pandemic has worsened the already “dire humanitarian” situation in fragile states such as Syria, Yemen and South Sudan.

In the letter to Mr Johnson about the decision to cut the Yemen aid budget, the charities said the move was taking place with “no transparency, consultation or meaningful strategy”.

“History will not judge this nation kindly if the government chooses to step away from the people in Yemen and thus destroy the UK’s global reputation as a country that steps up to help those most in need,” the signatories said.

On Yemen, the FCO said: “The UK remains steadfast in our support to the Yemeni people as one of the biggest donors of lifesaving aid and through our diplomatic efforts to bring peace.

“We are using our UN Security Council seat and working with our allies to push for a lasting resolution to the conflict. Yemen’s leaders must meaningfully engage with the UN to agree a ceasefire.”

On possible cuts to other aid budgets, the FCO said: “We are still working through what this means for individual programmes and decisions have not yet been made.

“We remain a world-leading aid donor and we will spend more than £10bn this year to fight poverty, tackle climate change and improve global health.”