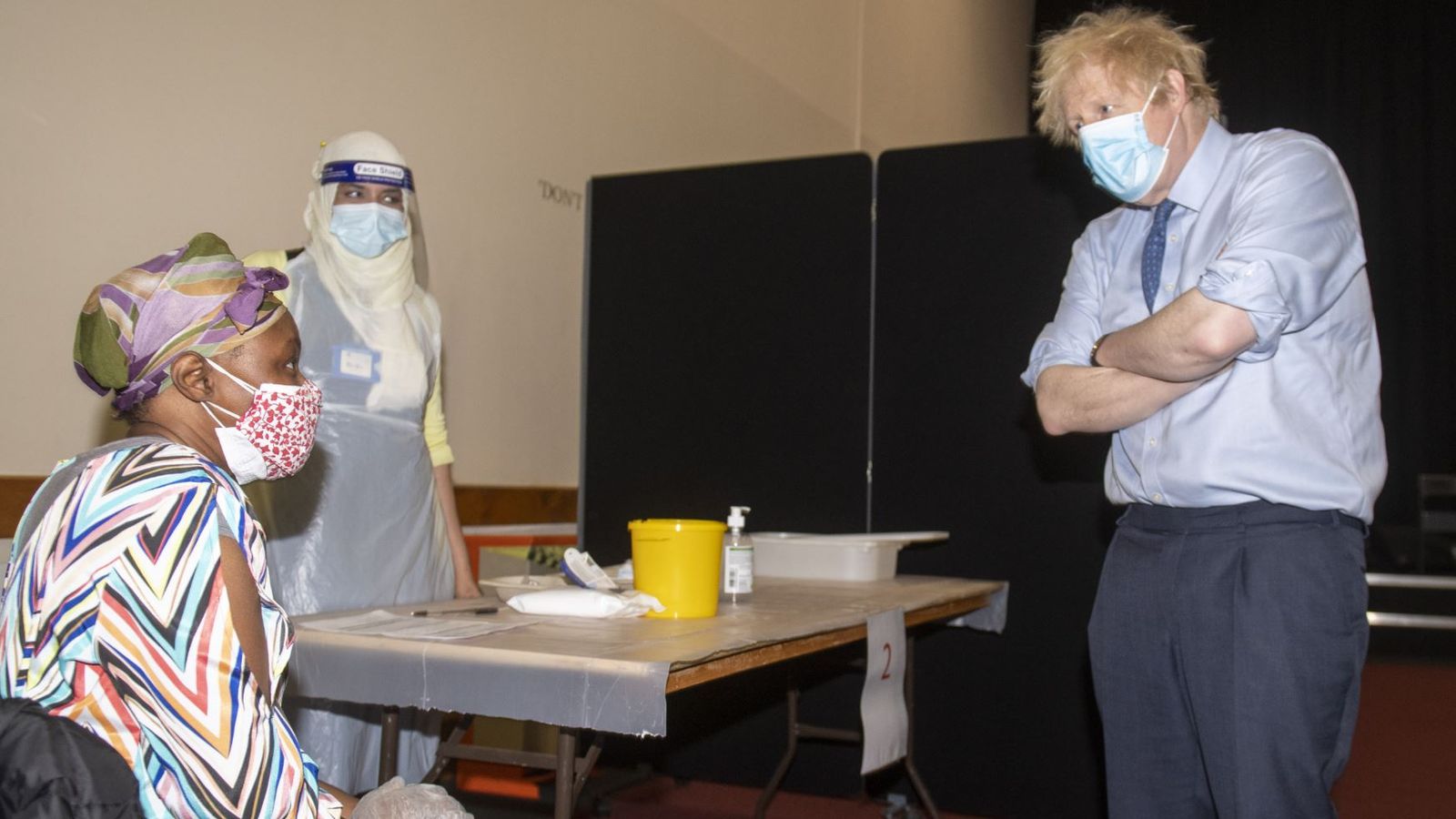 The prime minister has defended a proposed 1% pay rise for NHS staff.

“What we have done is try to give them as much as we can at the present time,” Boris Johnson said during a visit to a COVID-19 vaccination centre in north London.

“The independent pay review body will obviously look at what we’ve proposed and come back.

“Don’t forget that there has been a public sector pay freeze, we’re in pretty tough times.

“We’ve tried to give the NHS as much as we possibly can and that means, in addition to the £140bn of annual money, we’ve got another £62bn we’ve found to help support the NHS throughout the crisis.”

The PM – who spent time in intensive care with COVID and said the NHS “saved my life” – added that he was “massively grateful” to health service staff and social care workers for their “heroic” efforts throughout the pandemic.

But the proposal has sparked a backlash, with critics labelling it as “contemptuous” after a year spent on the front line of the coronavirus pandemic.

Unions have raised the prospect of industrial action, while demonstrations were due to take place outside Downing Street in London and in Manchester city centre on Sunday.

An opinion poll published in The Observer newspaper found that more than 70% of people (72%) think the pay rise on offer is too low, while a fifth (20%) think it is right.

The Royal College of Nursing (RCN), which has called for a 12.5% pay increase for nurses, said a 1% pay rise would amount to only an extra £3.50 a week in take home pay for an experienced nurse.

Inflation is currently at 0.9%, but other unions pointed to forecast inflation of 1.5% this year to claim a 1% pay rise for NHS staff would actually amount to a real terms pay cut.

At an emergency meeting on Friday, RCN leaders voted to immediately set up a £35m industrial action fund should its members wish to go on strike.

Reacting to Mr Johnson’s comments, Dame Donna Kinnair, RCN chief executive and general secretary, said “more of these warm words for nurses are not going to cut it”.

NHS pay offer ‘a kick in the teeth’

“When there are already tens of thousands of unfilled nurse jobs in the NHS, he’s pushing more to the door this weekend,” she said.

“The prime minister must put his money where his mouth is. NHS staff are worth it and there is overwhelming public support.

“His government can show it is listening and drop this plan.”

Labour’s shadow foreign secretary Lisa Nandy told Sky News it was “reprehensible” that the government was not recommending a larger increase.

How much more do private sector workers get paid compared to public sector employees?

Speaking to Sophy Ridge on Sunday, she said: “The government, to be clear, is not planning a pay rise.

“That is a real-terms pay cut because it doesn’t keep up with inflation and for nurses to be offered a pay cut is just reprehensible in our view.”

She said ministers should offer a 2.1% rise as a “bare minimum” – the percentage which NHS Providers states was contained in the NHS long-term spending plan announced before the pandemic.

According to Labour, a newly qualified nurse earning a £24,907 salary would face a real-terms pay cut of £174 if the 1% increase is implemented.

“What we all recognise is that this is a period of making sure we have restraint right across the public sector,” he said.

“But we aren’t nervous about investing in those key public services such as the NHS, such as schools.”

Nazanin Zaghari-Ratcliffe: Iran is most likely playing for time over Briton’s release