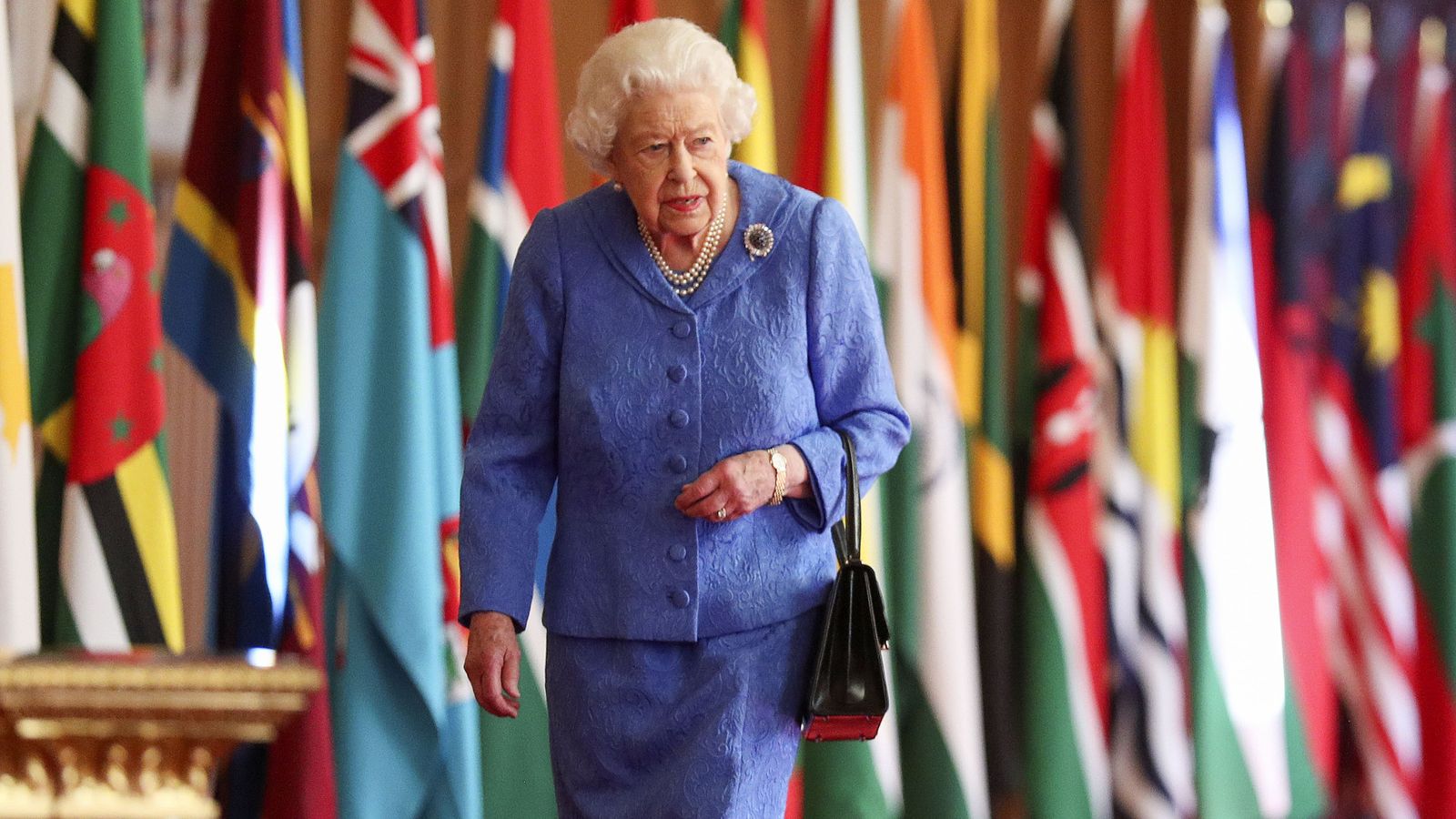 The Queen has been photographed with a backdrop of Commonwealth flags as she celebrates the family of nations.

The image was taken during the filming of a special BBC programme featuring the royal family, which is being screened tomorrow, ahead of Commonwealth Day on Monday.

The Queen was photographed in St George’s Hall at Windsor Castle wearing a delphinium blue dress and jacket of silk and wool cloque by Angela Kelly.

On her left shoulder the head of state wears the chrysanthemum brooch, made from sapphires and diamonds set in platinum.

Image: The Duke and Duchess of Cambridge praised the dedication of front line workers

The Queen was also pictured wearing the item when she was photographed with the Duke of Edinburgh to mark their 73rd wedding anniversary in November.

She also wore the brooch for images taken on her honeymoon with Philip at Broadlands in Hampshire in 1947, and again in pictures released to mark the couple’s 60th wedding anniversary in 2007.

Commonwealth Day is one of the most important days of the year for the Queen, who has made the Commonwealth a cornerstone of her official work during her 69-year reign.

A pre-recorded message from Her Majesty will feature in the BBC programme along with contributions from other members of the family.

In an extract from the programme, Kate and William chat in a video call with Dr Zolelwa Sifumba, from South Africa, an advocate for the rights of healthcare workers on the front line.

The duchess tells the medic: “Here in the UK there’s been masses of public recognition of the amazing work the front line are doing and it’s sad, almost, that it’s taken the pandemic for the public to really back and support all those working on the front line.”

William, Kate and their children were pictured last year joining in the weekly applause for front line workers during the early part of the pandemic.

Also during the programme, Prince Charles gives an address at Westminster Abbey in tribute to the “extraordinary determination, courage and creativity” of the Commonwealth’s people during the COVID crisis.

Image: Charles said people’s determination was an ‘inspiration to us all’. Pic: Westminster Abbey/Picture Partnership

During the speech he says the pandemic and climate change are “existential threats” which have no borders.

The prince adds: “The coronavirus pandemic has affected every country of the Commonwealth, cruelly robbing countless people of their lives and livelihoods, disrupting our societies and denying us the human connections which we so dearly cherish.

“Amidst such heart-breaking suffering, however, the extraordinary determination, courage and creativity with which people have responded has been an inspiration to us all.

“This pandemic has shown us the true nature of a global emergency. We have learned that human health, economic health and planetary health are fundamentally interconnected and that pandemics, climate change and biodiversity loss are existential threats which know no borders.”

Camilla is featured speaking to broadcaster Clare Balding about how her interest in books was inspired by her father Major Bruce Shand’s love for literature.

The duchess says: “I’ve always had a passion for books. Books have been part of my life for so long. I started reading when I was very, very young with a father who has a fervent bibliophile.

Image: The Countess of Wessex has also taken part

“So from the age of two or three he used to sit and read to us children, take us on wonderful adventures… all over the world.”

The piece was recorded at Westminster Abbey’s Poets’ Corner and the pair were joined by video link by award-winning teacher Ranjitsinh Disale.

Camilla says: “I think I was bitten at that age and from then I’ve just kept going, and I’ve got involved in a lot of literacy programmes and patronages. I just feel very strongly that all children should be taught to read.”

Sophie, the Countess of Wessex, marked Commonwealth Day and International Women’s Day, which are both celebrated on Monday, by speaking by video link to three women from around the Commonwealth, to hear about their experiences of supporting other women and their wider communities.