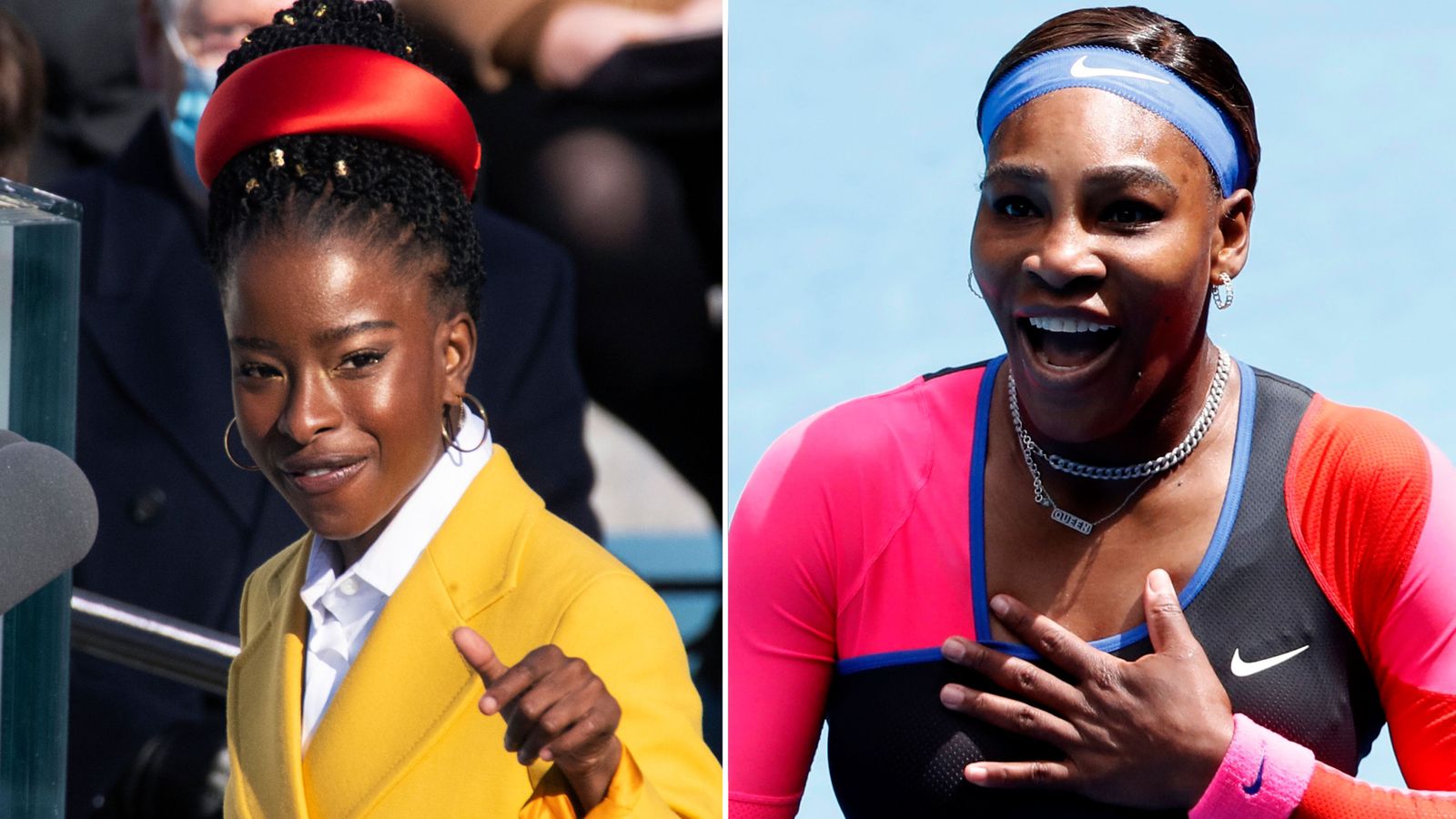 Poet Amanda Gorman and tennis star Serena Williams have come out in support of the Duchess of Sussex following the royal couple’s interview with Oprah Winfrey.

Meghan’s long-term friend Williams led the backing, calling the duchess her “selfless friend” who “teaches me every day what it means to be truly noble”.

Gorman, who became well known after a powerful performance at Joe Biden’s inauguration, referred to “the Crown” in one tweet.

She said the royals had missed the “greatest opportunity for change” and “didn’t just maltreat her light”.

“Meghan is living the life Diana should have, if only those around her had been as brave as she was,” she added in another tweet.

Meghan was the Crown’s greatest opportunity for change, regeneration, and reconciliation in a new era. They didn’t just maltreat her light–they missed out on it.

Williams, who attended Meghan’s wedding to Harry, posted: “I want Meghan’s daughter, my daughter and your daughter to live in a society that is driven by respect.

“Keep in your memory the fruitage of the spirit is love, joy, peace, long-suffering, kindness, goodness, faith, mildness, self-control. Against such things there is no law.”

Social media users have been largely sympathetic towards Meghan and Harry – many being shocked by the number of revelations that surfaced from the two-hour special with the chat show host.

Daniel Martin, who did Meghan’s make-up on her wedding day, shared a picture of the pair on Instagram, alongside a poem from Maya Angelou that said: “You may write me down in history With your bitter, twisted lies, You may trod me in the very dirt. But still, like dust, I’ll rise.”

During the broadcast – which was aired a year after the couple made the US their home – serious topics including mental health, race, lack of support and the colour of Archie’s skin were discussed.

Meghan also revealed she had contemplated taking her own life at the height of her distress within the Royal Family.

American activist Brittany Packnett tweeted: “Trigger warning: suicide Them denying her help for mental distress and suicide ideation is one of the sickest things I’ve ever heard. It is SO so hard to reach out and ask for help. I know this personally and intimately. This is so triggering.”

In the UK, late second editions of the newspapers led with headlines such as “Meg: I Felt Suicidal”, “Meghan Accuses Palace of Racism”, and “Meghan’s bombshell: Kate Made Me Cry!”.

The niece of US Vice President Kamala Harris, Meena Harris, was also among celebrities and US activists expressing their support for the couple.

Prior to the interview airing, she tweeted: “Happy Meghan Markle appreciation day.”

She later tweeted, “She was suicidal and begged for help”, referring to Meghan’s confession, and “Her Majesty The Queen Oprah.”

She was suicidal and begged for help.

American comedian Matt Bellassai tweeted: “The little inhales Meghan and Harry both take before dropping each bombshell……. the ‘I’m about to say this s*** to Oprah’ breath.”

Lord Alan Sugar said: “I just watched the Harry and Meghan interview with Oprah on US TV. Hmm … I’ll be interested to see the reaction in the UK tomorrow.”

When asked for his take on the interview, Lord Sugar replied “I have no comment!”

Arguably the most damning allegation against royal household was one of racism, when Meghan revealed there were “several conversations” about her son Archie’s skin tone.

Bernice King, the youngest child of the late civil rights activist Martin Luther King, tweeted: “Royalty is not a shield from the devastation and despair of racism.

Author Morgan Jenkins speculated that the race conversation was “probably worse than what we’re even imagining” because Harry did not elaborate on it.

Social media also erupted when Meghan told Winfrey that it was the Duchess of Cambridge who reduced her to tears, not the other way around as many papers reported.

Activist Brittany Packnett also shared her views on this topic, tweeting: “The polarity is precisely the issue. The difference in treatment between Meghan and Kate is one of the clearest examples of the misogynoir at play & is a reminder that if they can do that to a Duchess, it’s happening to Black women *everyday*”.

Kate literally took Meghan to Wimbledon 2 years in a row. Kate is patron of Wimbledon and is there in a formal capacity and usually attends with William, she took Meghan too.

It was a united front and a public show of support against the feud stories. #OprahMeghanHarry pic.twitter.com/uP5EMV2ajs

Others defended Kate, with royal watcher Kayla Adams writing: “Kate literally took Meghan to Wimbledon 2 years in a row. Kate is patron of Wimbledon and is there in a formal capacity and usually attends with William, she took Meghan too. It was a united front and a public show of support against the feud stories.”