Harry and Meghan: What is ‘the firm’ and how does the Royal Family work? 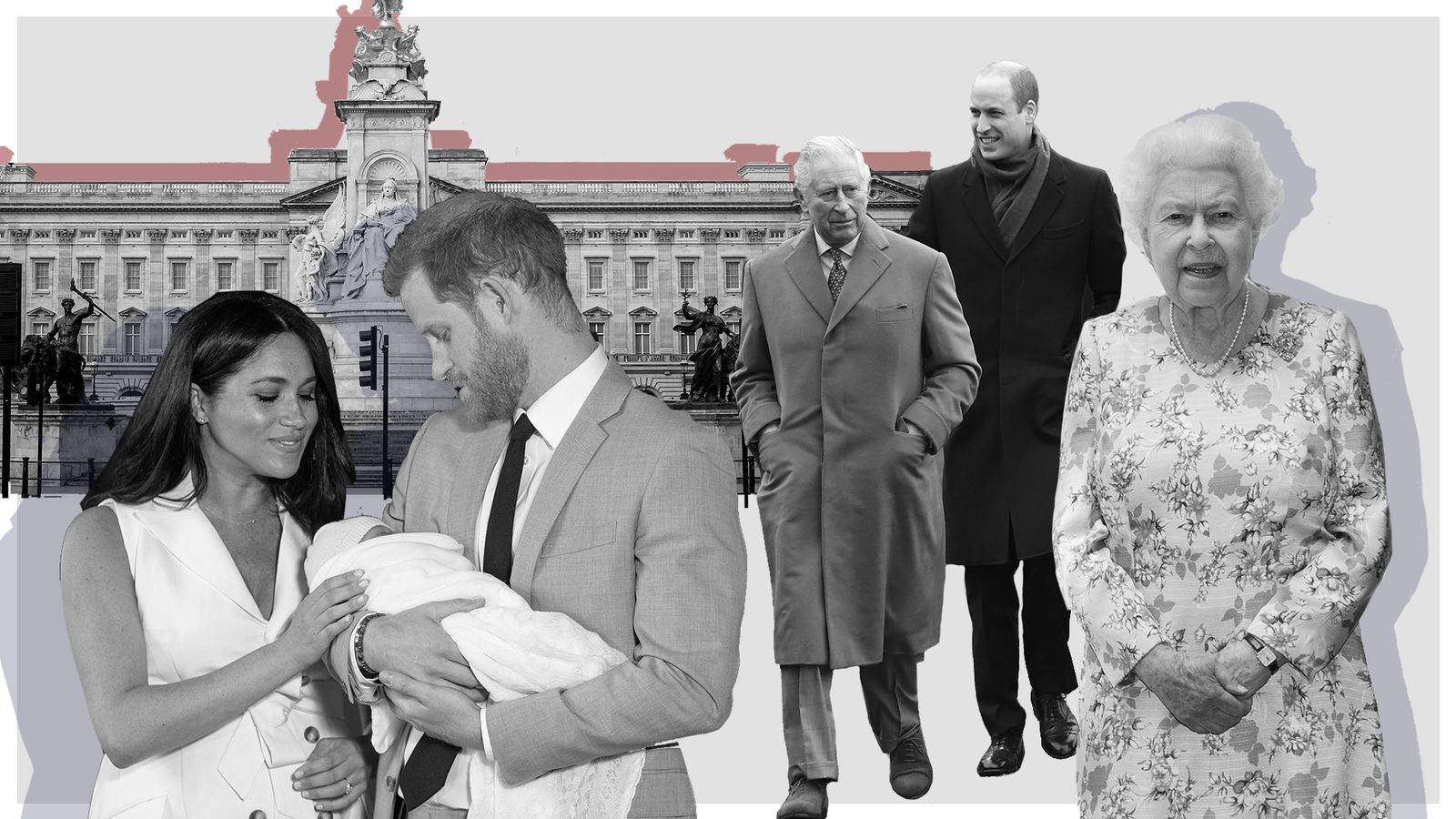 During Harry and Meghan’s eye-opening interview with Oprah Winfrey the couple used royal terminology most of the world is unfamiliar with.

The Queen’s former press secretary, Charles Anson, told Sky News “the institution” and “the firm” – which Meghan referred to – are “not much used within the royal household”.

“They would generally use ‘the monarchy’ or ‘the royal family’ instead,” he said.

Sky News breaks down the jargon and explains how the Royal Family works.

Meghan referred to “the firm” several times during the interview, most notably when she said: “I don’t know how they could expect that after all of this time, we would still just be silent if there is an active role that the firm is playing in perpetuating falsehoods about us.”

The phrase refers to the Royal Family, in which senior members support the Queen’s work as she cannot do everything herself.

Prince Philip has been heard using it ironically.

There was no reply as Prince Charles is asked about Meghan and Harry’s interview as he visited a vaccination centre this morning.

The Prince turns in response to the question but is quickly ushered away before any answer can be given.

The UK has a constitutional monarchy which means the Queen is head of state but cannot make political decisions.

The Royal Family and the work they do is often referred to as the monarchy.

Image: Meghan and Harry referred to the Royal Family as ‘the firm’

Meghan took aim at “the institution” when she said they would not help with her declining mental health because she was not an employee.

She clarified to Oprah that the institution is the office of employees who run the royal households.

“So, there’s the family, and then there’s the people that are running the institution,” she said.

“Those are two separate things. And it’s important to be able to compartmentalise that, because the Queen, for example, has always been wonderful to me.”

Each senior royal and their partner has their own “household” – departments with their own staff that support each royal couple to carry out their official duties.

Households are generally referred to by the main building they work from, such as Clarence House for Prince Charles and Camilla and Kensington Palace for the Duke and Duchess of Cambridge.

The Royal Household, the Queen’s, is the largest and is the overarching advisory body, with staff from other households referring up to her office.

However, they still take care of their own events with coordination between them all to ensure there are no timing clashes.

Image: When Prince George is old enough he will have his own royal household, like his great-grandmother, grandfather and parents

Prince Philip has his own household. They are the only royal couple to have separate households.

Prince Charles and Camilla’s household is smaller than the Queen’s, and the Duke and Duchess of Cambridge’s is smaller than his, as was Harry and Meghan’s before they stepped back.

Who runs the households?

Especially in the Royal Household, there is an extensive hierarchy and although each royal is head of their own household, they are not employed by the household.

Each household is run like a business, with roles ranging from HR and finance to chefs and engineers.

Meghan said she went to “one of the most senior people” in the household to ask for help with her mental health concerns but was told seeking treatment at a facility “wouldn’t be good for the institution”.

The Queen has an extensive range of leading doctors she can call on for medical help at any time.

Image: The Queen’s royal household runs as a business, employing everyone from HR to chefs

Meghan said she then went to the HR department but was told they could not help as she was not a household employee.

It is not clear if this was the Queen’s household or possibly Charles’.

Since 2006, Earl Peel has held this part-time position in which he is the overall coordinator of the Royal Household.

He is the Queen’s principal adviser and serves as the main channel of communication between the Queen and the government.

Image: Prince Philip, who is now retired from royal duties, has his own household

Sir Edward also manages her official programme and correspondence with her two other private secretaries.

All other senior royals have their own private secretaries, which are the most senior roles in their households.

Keeper of the Privy Purse and Treasurer to the Queen

He is responsible for the Queen’s personal and semi-private finances, such as racing stables, and has oversight of the sovereign grant, the annual taxpayer-funded payment to the Queen for her and her family’s official duties.

Master of the Household

Vice-Admiral Sir Tony Johnstone-Burt has held overall responsibility for the domestic workings of the household since 2013.

He is responsible for the Queen’s official entertainment, including garden parties and state banquets.

Image: The Queen’s former equerry, Lieutenant Colonel Nana Kofi Twumasi-Ankrah, placing flowers on the grave of the Unknown Warrior for her

The office is responsible for all official royal occasions such as trooping of the colour and state funerals.

During official visits in the UK and abroad senior members of the royal family are assisted by an equerry.

They are senior officers of the Armed Forces and are seen by royals’ sides at official functions during their two-year stint.

The Queen has three and they will take presents given to her and ensure she and her guests are comfortable, possibly greeting guests and taking them to the Queen.

Prince Philip, when he was still working, had an equerry while Prince Charles and Prince William also have them.