Harry and Meghan’s interview: How much damage have the couple’s claims done to the Royal Family? 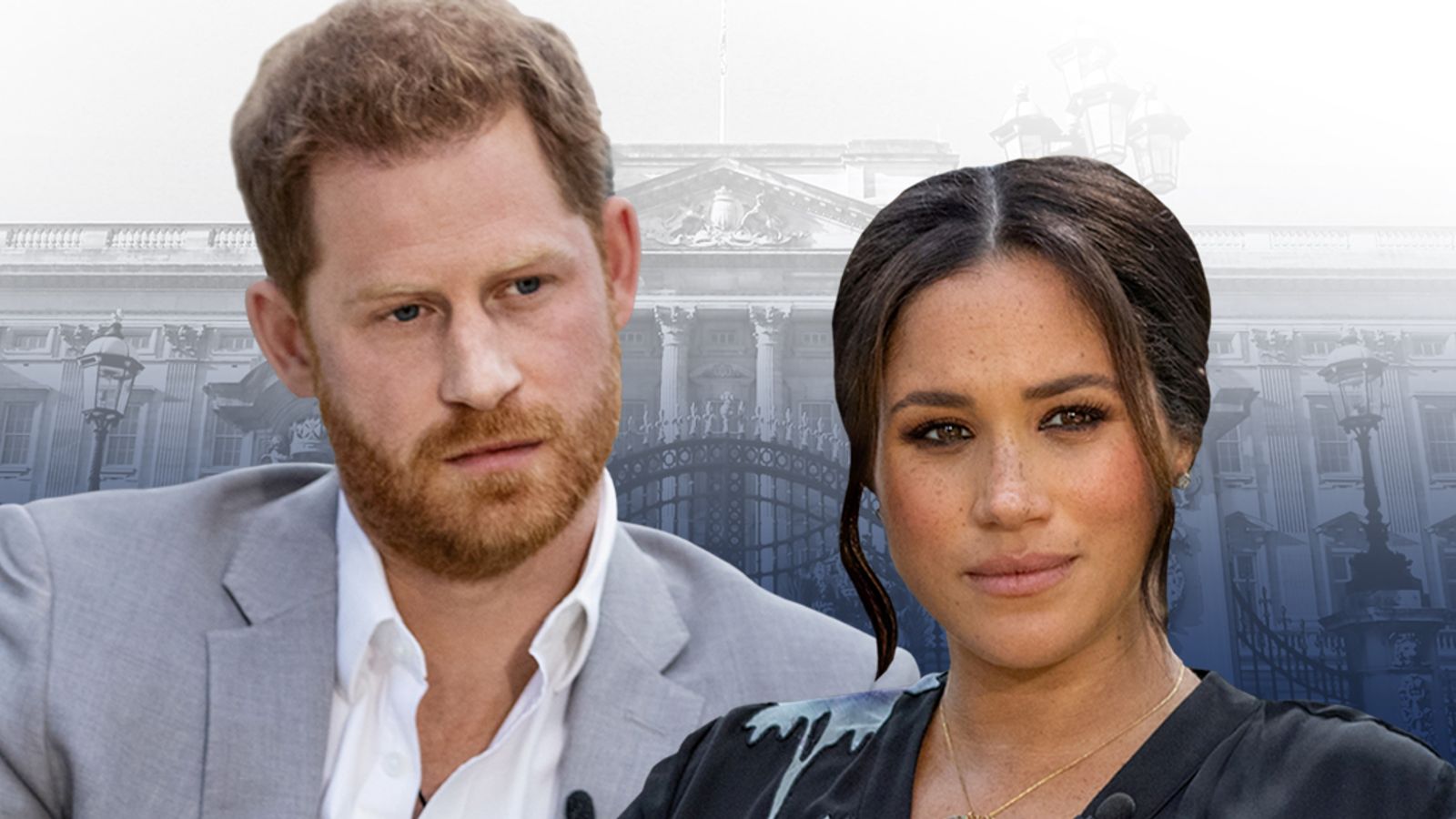 The “circus”, as one senior palace source described it, had been running for nearly three weeks.

The heavy promotion had built up the hype.

But as I watched the interview in the early hours of Monday morning, on very little sleep, I’ll admit I was genuinely shocked at how far Harry and Meghan had decided to go.

When Meghan described having suicidal thoughts, I could hear a sharp intake of breath from the others in the office.

And then she delivered that killer line, the claims that the couple had faced questions from within the family about the colour of unborn baby Archie’s skin.

The claims had been more explosive than expected.

Image: The claims made in the Oprah Winfrey interview dominated the news agenda

In the run up to the interview a palace insider had said to me that the hype is often bigger than the event, and it would take something extreme for the rest of the Royal Family to comment. But as the family slept, the institution had been exposed from within as uncaring, unsupportive, and even racist.

The response took nearly two days – hardly surprising when the claims had been so toxic.

But just as we saw when the Sussexes decided to step away from royal life, the Queen was taking charge.

The couple had been careful not to criticise Her Majesty but inevitably Harry was putting his grandmother, as head of the institution, in a very difficult position.

Speaking to a couple of senior palace sources, it is very clear that a three-line whip from the Queen is firmly in place – no one should talk about this interview publicly. With the word “family” used three times in the statement, this is a personal matter and they are not going to unpick it in public.

The issues raised, particularly that of race, are concerning. Whilst some recollections may vary, they are taken very seriously and will be addressed by the family privately. The Royal Family

Already, this private matter has disrupted the family’s ability to focus on public duties.

I never thought I’d see the moment that a member of the Royal Family was directly asked: “Is your family racist?”

Prince William was quick to shoot down those claims, but it perfectly highlighted the problems for the Royal Family.

The fact the question has even been raised. The fact that, in polling this week, younger people in this country seemed to side more with Harry and Meghan. It has got people questioning what the monarchy stands for and whether it truly represents everyone.

I caught up with one person who has supported the royals in their charity work for many years. They told me the claims have hit them very hard and they do wonder how the Royal Family “can effectively play that role with the backdrop of all this”. They now want to see the institution “take stock and respond in a meaningful way that brings society together”.

However, Sky’s royal commentator Alastair Bruce reminded me that this is not a family known for knee-jerk reactions – despite public pressure, they will deal with it in their own time.

Besides, the palace hopes “actions will speak louder than words”.

Image: The palace hopes actions will speak louder than words – the mental health work done by William and Kate, for example

Take the Cambridges’ commitment to mental health, Prince William’s recent interventions on racism in football, Prince Charles promoting the COVID-19 vaccine within black and ethnic minority communities – not simply token gestures, their supporters would say, but part of the Royal Family’s long-standing commitment to highlighting and promoting equality, diversity and mental health.

The Prince of Wales, for example, visited Brixton after the riots in the 1980s. It was the conversations he had with young people then, who felt they weren’t being listened to, that helped to shape The Prince’s Trust. As it was put to me, the royals meet so many people on a yearly basis that they build up a very “sophisticated nationwide case study” of opinions and concerns.

The sense that Meghan was made to feel different is a hard one for them to shut down. It is her word against theirs, but they’re not going to get into public point-scoring and that includes on the claims she wasn’t supported.

Most of us couldn’t start to imagine what it was like for Harry and Meghan living that life – the privilege, nor the spotlight that comes with it.

I first met Nelson Mandela’s granddaughter Ndileka Mandela when the Sussexes visited South Africa in 2019. As a member of another world-famous family, she understands the pressure the couple must have felt.

She told me: “The fact that they are talking about these two personalities… this duality of persona that you have to be when you come from certain families – that there is this persona: this public persona and the private persona.

“Sometimes these personas are on a collision course, because such institutions are steeped in traditions – how to behave like this and how not to behave.”

Image: Both Meghan and Harry seemed aware of the challenges, leading some to question whether Meghan really was so naïve and vulnerable

Following those claims from Meghan that no one even helped her learn the National Anthem, I looked back at the interview they gave when they announced their engagement in 2017.

Both Meghan and Harry seemed aware of the challenges. Harry said they had sat down and talked about them. And that’s partly why some question whether Meghan really was that naïve and vulnerable.

From my point of view they always seemed to have an incredibly loyal and supportive team of staff around them.

I’ll never forget the angry response I got from Harry’s team when I tried to ask him a question in Malawi – they did everything to defend their boss. They also gave me a telling off when I tried to ask Meghan how she was feeling after they announced she was pregnant while on tour in Australia. So it’s not surprising that palace staff are not happy about how this has all been portrayed.

This week I heard that there was genuine upset within Buckingham Palace about the interview, especially around the allegation that racism may have been at play when it came to Archie’s title or security. There was disappointment that Harry hadn’t corrected that, insiders saying he knew that it was because of protocol and that the Home Office and the Met Police also have a say in who gets protection and at what level.

Another former member of staff told me that it is sometimes impossible not to get dragged into misunderstandings between different family members and their different offices, saying: “You are either go-betweens or scheduling meetings at times when you would rather not”. That is why those who work there and worked for the Sussexes will have taken it all so personally.

With the Sussexes settled in America and the work separation sorted, I was told before the interview that the rest of the family had wanted to concentrate on rebuilding the personal relationships.

As one palace insider told me: “The war has stopped so it’s probably best to stop bombing.”

Just agreeing to an interview felt like unnecessary point-scoring, but was also a surprising move for a couple who want to protect their privacy. I couldn’t help but think back to a speech Harry gave on the last day of their Africa tour.

After he had dropped his statement criticising the media, he vowed to always stand up for what he thought was right.

What they do want is the opportunity to control the narrative around their own lives and, given we’ve spent the past three or four years talking about them, I think it’s fair to let them have a couple of hours. Omid Scobie, author of Finding Freedom

Omid Scobie, the author of Finding Freedom, said the couple never wanted a totally private life, but a different kind of public life.

He said: “I think we have to really understand what privacy actually means: It is the ability to have control over what you keep private about your life and what you decide to share. So no, they don’t want Meghan’s handwritten letters to her father in the pages of a British paper and neither do they want their staff leaking stories to the press.

“What they do want is the opportunity to control the narrative around their own lives and, given we’ve spent the past three or four years talking about them, I think it’s fair to let them have a couple of hours.”

Image: The couple were careful not to criticise the Queen but inevitably Harry has put his grandmother in a very difficult position. Pic: AP

‘We are only just having this conversation about emotion’

Activist and model Adwoa Aboah worked with the royals on their mental health campaigns and with Meghan on gender and racial equality. She told me about being invited for tea with the Sussexes at Kensington Palace, and how she found Meghan to be very genuine and committed to those causes.

“We are only just having this conversation about emotion. There’s a reason we talk about a stiff upper lip. So when I see people talking about it, they’re rejecting this idea that someone can be so emotive and so vulnerable and it’s almost like: ‘That’s not how we do things here’.”

Image: Do the Sussexes want a totally private life or more control over their public life? Pictured is one of their first photos of baby Archie

For the Sussexes, does this interview finally bring the closure and the new start they wanted?

I’m told that they are focusing on getting ready for the arrival of their new baby girl and launching more projects through their Archewell Foundation.

Those who support their charity work certainly hope they can settle, but they also know there will be challenges ahead.

Johnny Hornby, chairman of Sentebale, the Aids/HIV charity set up by Prince Harry in Lesotho in Africa, said: “The reality is they are probably still one of the most famous couples in the world.

“So I don’t think leaving the UK or the UK media is going to change that.

“The world’s media are fascinated by this couple and so is the world of social media, so you can never really walk away from these things.

“But I would say that he feels he has taken a step back.”

Image: Only time will tell if the interview brings the new start sought by the couple

Mr Hornby added: “I think that’s actually when you see Harry at his happiest – when he is, for example, in a country like Lesotho, when he’s working with a charity where most of the people aren’t thinking about him in his role as a prince but more as somebody who is rolling their sleeves up and getting involved in the projects we’re doing.”

Were the Sussexes right to call out the prejudices they perceived or was this about settling scores?

Whichever side you take, by sharing their own truth they took a direct hit at The Firm. The full extent of the fallout is still immeasurable for the Sussex brand, their relationships, and the reputation of the Royal Family.

The monarchy has been rocked by a couple frustrated that they couldn’t change it from within.

COVID-19: Nearly 50,000 businesses sign up to offer rapid coronavirus testing for their employees