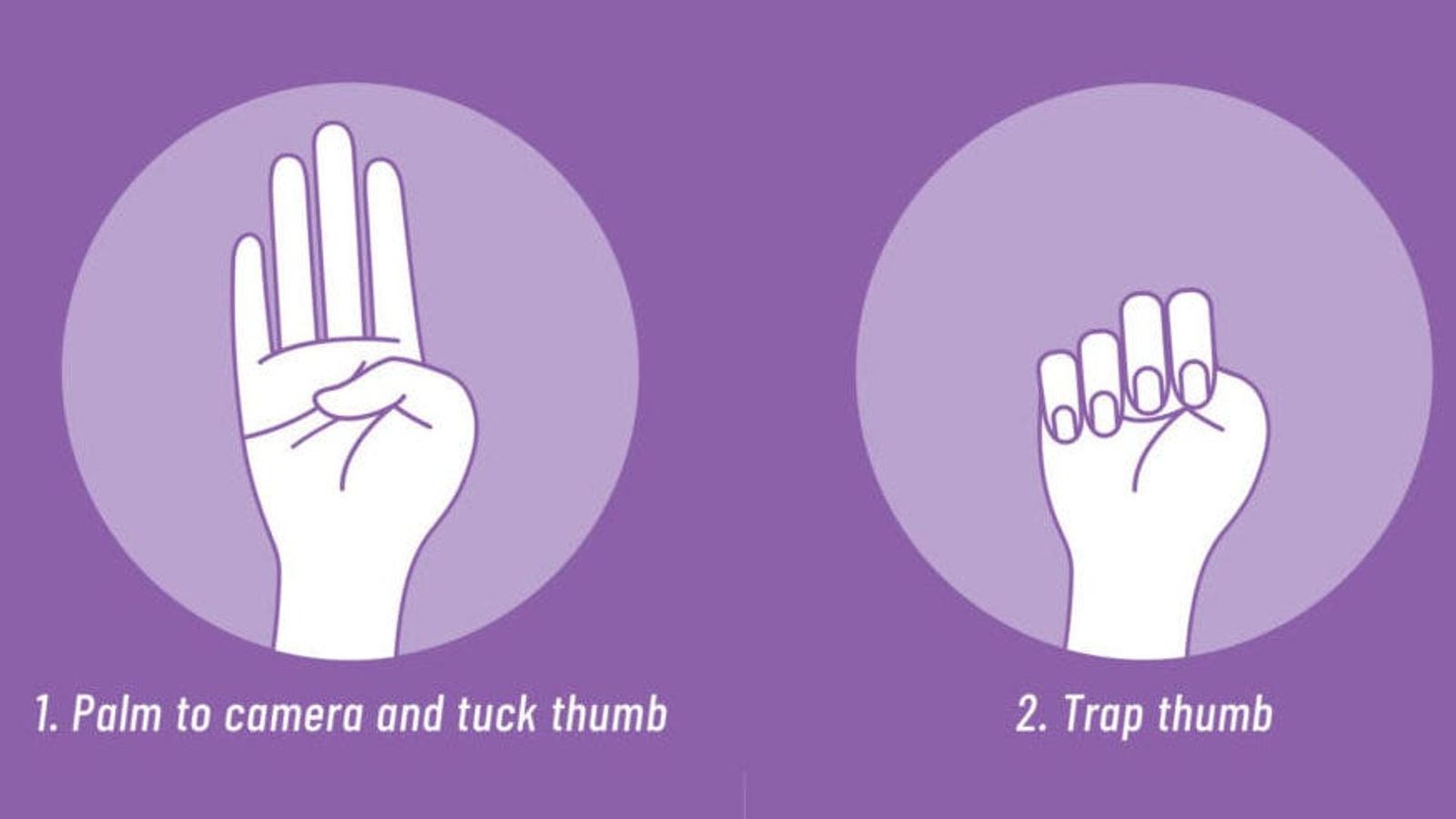 The case of Sarah Everard has sparked a national conversation about women’s safety, with many sharing harrowing stories on social media about the abuse they have suffered.

Men have been seeking advice on how to change their behaviour to make women feel safer in public – and thousands of others have shared ways victims can safely access help and support.

Campaigners and MPs are pushing for a law to protect women from abuse on the street after Ms Everard’s disappearance and a minister has told Sky News the government will take forward new legislation if necessary.

In the meantime, here are some ways people can discreetly access help – without alerting others.

The simple hand gesture was launched early in the COVID-19 pandemic last year to address a worldwide rise in domestic violence and help those suffering while stuck at home.

The gesture, created by the Women’s Funding Network and the Canadian Women’s Foundation, was developed to be silently displayed during video calls, to alert family, friends or colleagues that an individual needs help.

It could also be used in other situations, such as when answering the door.

It involves putting your palm up, tucking your thumb in, and closing your fingers.

Originally launched in Canada and the US, it has spread across the globe thanks to social media.

Women’s Funding Network CEO Elizabeth Barajas-Roman said: “Signal for Help is important because it’s non-verbal and is powerful regardless of language and culture.”

Image: This hand signal is among the ways people can ask for help discreetly when in need

In January, it was announced that pharmacies were launching a codeword scheme as a “lifeline” to domestic abuse victims suffering in lockdown.

The scheme has been rolled out across Boots stores and private pharmacies.

If a victim asks for ANI (which stands for “action needed immediately”), a trained pharmacy worker will offer to take them aside where they can discreetly help them either contact domestic abuse services or the police.

Mark Lyonette, chief executive of the National Pharmacy Association, said: “Community pharmacies are about people, not just pills. There is a clear and urgent need to support victims of abuse and we want to play our part.

“The Ask for ANI alert mechanism is a discreet and sensitive way to help support some of the most vulnerable people in our society.”

Image: Boots and several other pharmacies have signed up to the scheme

Apple’s iPhones have a feature which allows you to discreetly make an emergency call and share your location at the same time.

On more recent handsets, from iPhone 8 onwards, you can press and keep holding the side button and either volume button to discreetly make an emergency call.

When you do this, the emergency SOS slider appears: drag to call emergency services.

If you continue to hold down the side and volume button instead, a countdown begins and a loud alert sounds. If you keep holding until the countdown ends, your iPhone automatically calls emergency services.

On iPhone 7 or earlier, you can get the emergency SOS slider by rapidly pressing the side button five times.

After the call ends, your iPhone will ping your emergency contacts with a message that says you have called emergency services and your current location, unless you choose to cancel.

You can manage your emergency contacts by editing your medical ID in the health app on iPhone. It will do this even if your location services are off. If your location changes, your contacts will get an update for a limited time.

There is a similar feature on Android phones, but how they work varies between manufacturers.

On Samsung, for example, there is an SOS feature within your device’s advanced settings. When turned on, pressing the lock button three times will automatically send a message to a dedicated contact with a link to your location.

You can also choose to include a photo or voice message. You can read Samsung’s full guide here.

For other handsets, check the guidance provided by the manufacturer.

Launched in 2016, Ask for Angela is an initiative in hospitality venues designed to help prevent sexual violence.

Posters in venues, most often placed in toilets, inform customers that they can “ask for Angela” to a member of staff, which acts as a discreet code word instructing employees that they feel unsafe or threatened.

Staff will subsequently help the victim out of their situation.

The use of the name “Angela” is a play on the idea of a guardian angel.

The campaign was the brainchild of Hayley Child, the substance misuse strategy coordinator for Lincolnshire County Council, and gained attention after it was successfully trialled in Lincoln.

The Met Police has helped introduce the scheme in London venues.

A silent solution to 999 calls

Last year, the police watchdog launched a campaign to raise awareness about the 999 Silent Solution system, which allows those in dangerous situations to make silent calls for help.

If you can’t speak, or are afraid of being overheard, the guide advises you to cough or tap your phone handset. Trained call handlers will recognise this as a distress signal.

However, there may be scenarios in which making a sound is too dangerous. In these situations, the police ask that callers dial 55 to alert the operator they need help and haven’t dialled 999 by accident.

The system has been in place since 2002, but an awareness campaign, backed by domestic abuse charities Women’s Aid and Welsh Women’s Aid, was sparked in 2019 following the death of 36-year-old Kerry Power.

She was murdered by violent ex-partner and stalker David Wilder, who let himself into her home in Plymouth in 2013.

She made a silent 999 call, but as she didn’t press 55, her call was not transferred to Devon and Cornwall Police.

If you are a victim of domestic violence you can call for help at the British National Domestic Violence Helpline on 0808 2000 247.

COVID infection rate in England hits lowest level since September as R number falls to between 0.6 and 0.8