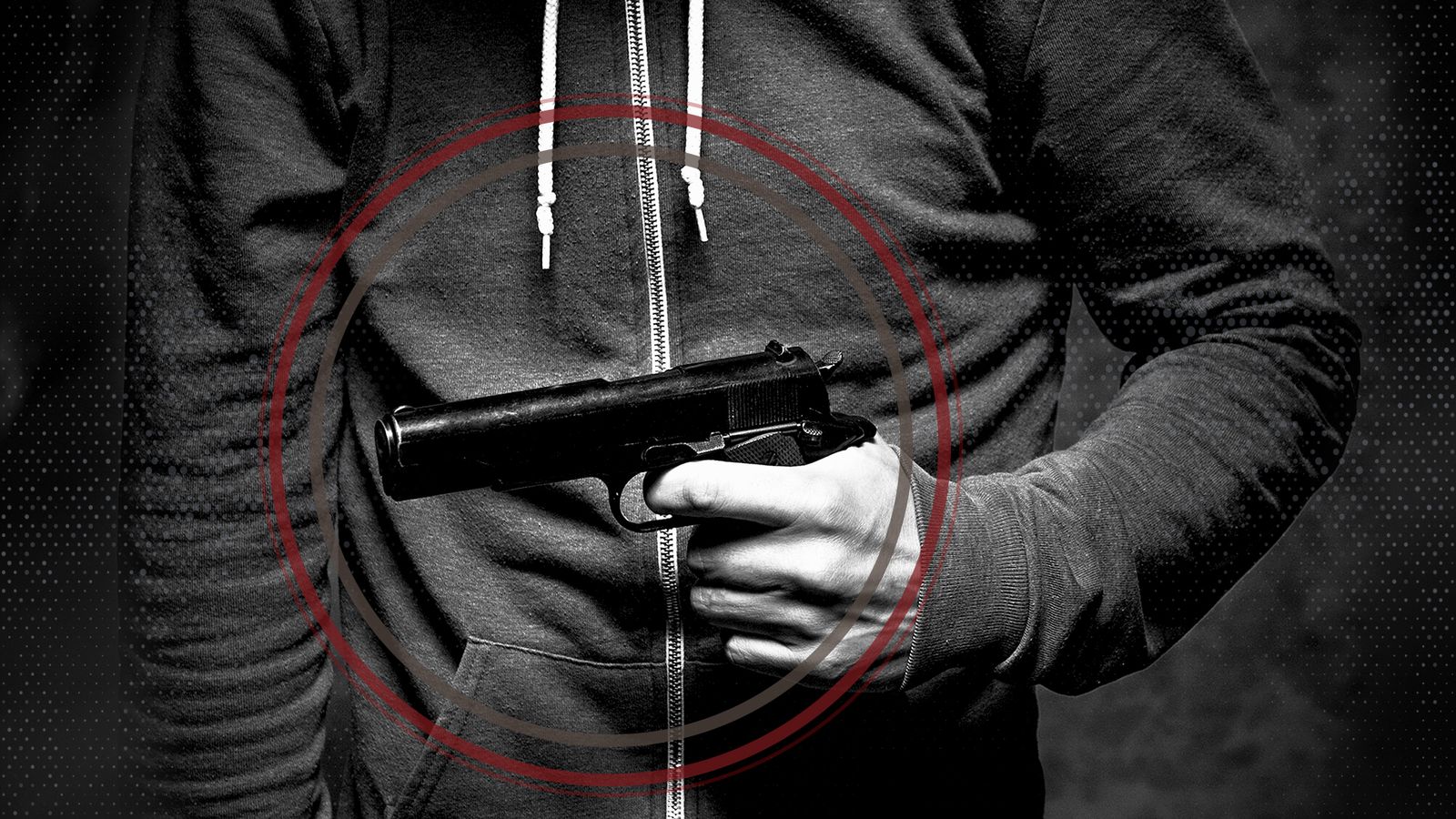 More than 600 children in the UK were arrested for suspected firearm offences last year amid the coronavirus pandemic, new figures reveal.

A Sky News investigation has found children as young as 11 were among more than 2,000 youths detained for alleged crimes involving guns, imitation firearms and air weapons between 2018 and January 2021.

They included 664 youngsters arrested in 2020 during the COVID-19 crisis – some of whom were just 12 years old.

Search the table below to find out the number of youths arrested for suspected firearm offences in your area.

The mother of a student who was shot dead in London last year in a case of mistaken identity told Sky News the figures were “shocking”.

Alexander Kareem, who would have turned 21 this month, was gunned down as he walked near his home in Shepherd’s Bush, west London, in June.

A 16-year-old boy was among nine people arrested on suspicion of conspiracy to commit murder but no one has been charged over the killing.

Mr Kareem’s mother Victoria Oloniluyi, who has urged anyone with information about her son’s killer to come forward, said youths carrying firearms were “endangering people’s lives and their own lives”.

She said: “It’s really shocking. Where do they get the guns?

“They should drop it and think better about their own future – there are much better things to do than carry guns.”

Image: Victoria Oloniluyi pictured with her son Alexander who she called a ‘computer genius’

Ms Oloniluyi said Alexander was a “computer genius” who planned to go to university but his killers had “cut his life short”.

“Alex had no idea about gangs. He was a very quiet young man,” she added.

“When the police knocked on my door to tell me what happened… I collapsed.

“My life has changed since then. I never have any happiness in my life.

“Every day, every minute, every second, it’s in my mind.”

What did police reveal about child gun crimes across the UK?

Sky News sent freedom of information requests to the UK’s 45 regional police forces and British Transport Police (BTP) asking for the number of people under the age of 18 who have been arrested for firearm offences since 2018.

Image: More than two dozen suspected firearms were seized in a week across London in February. Pic: Met Police

Britain’s biggest force, the Metropolitan Police, said 171 youths were detained for alleged firearm crimes in 2020 – up from 165 in 2019.

Of the youths arrested since 2018, 343 were charged by police, according to forces.

The actual number of children arrested for suspected firearm offences is likely to be much higher as nine forces did not provide their data.

They included Police Scotland which refused to reveal how many children have been arrested for suspected firearm offences, saying it would cost too much to retrieve the information.

Simeon Moore, who carried a gun aged 15 when he was a member of a notorious Birmingham gang, said young people arming themselves often believe they are doing “the right thing”.

The 38-year-old now works as a community activist to tackle what he sees as the glamorisation of gang culture.

He told Sky News: “I got into a position where I was in a feud with other youths from different areas.

“From knives, we started to carry guns. For me, at the time it was a means of protection.

“I was walking around and at any point I could get beat up, stabbed or have my head blown off.

“At those times I actually believed that was the right thing to do. You have to realise a lot of these young people [carrying firearms] actually believe this is what they’re supposed to be doing – they believe that in their heart.

“You’re not going to give your life to something if you don’t truly believe it.”

‘Children carrying guns are being used as pawns’

The mother of an 18-year-old man who was shot dead in Greenwich, southeast London, in 2018 told Sky News that young people carrying guns were often “used as pawns” by criminal gangs.

Cherie Nedd now runs a foundation dedicated to her son Ethan Nedd-Bruce which aims to tackle knife and gun violence in the capital.

She said: “A lot of it is exploitation… they’re being used as pawns really.

“If a grown-up, somebody over 18, has a firearm, they know that it’s quite a stiff sentence. Whereas if a child is found with it, it’s a sentence but it would just be some sort of order around that child.

She added: “How can you expect an 11-year-old to make an informed decision about that? They don’t know how serious it is until they get older and they realise this a big deal.”

Victim Support said it had seen an 85% increase in deaths from shootings in the last year and had supported more than 250 bereaved families affected by gun crimes in the last three years.

Diana Fawcett, the charity’s chief executive, told Sky News: “At a time when the number of homicides has been falling, deaths related to gun crime are showing significant increases which is incredibly concerning.

“Gun crime destroys lives, shatters communities and has a devastating impact on families who suffer unimaginable emotional pain and turmoil when they lose a loved one.

“It is vital that the police, educators and community groups work together locally to tackle the root cause of this crime and to ensure all those affected are supported.”

What are police doing to tackle child gun crimes?

The National Police Chiefs’ Council (NPCC) said gun crime levels in the UK remain low but “we cannot be complacent and are working to both protect and reassure our communities”.

Chief Constable Jo Shiner, the NPCC’s lead for children and young people, told Sky News: “Forces across the country and community safety partnerships are working together to prevent young people getting involved with firearms.

“This is a key piece of work for all agencies and communities in breaking the cycle of young people becoming involved in gangs and the associated criminality.

“Any child or young person committing an offence is worrying and often an indicator of potential harm and therefore we work with our partners to take a welfare based approach to prevent the escalation of harm.”