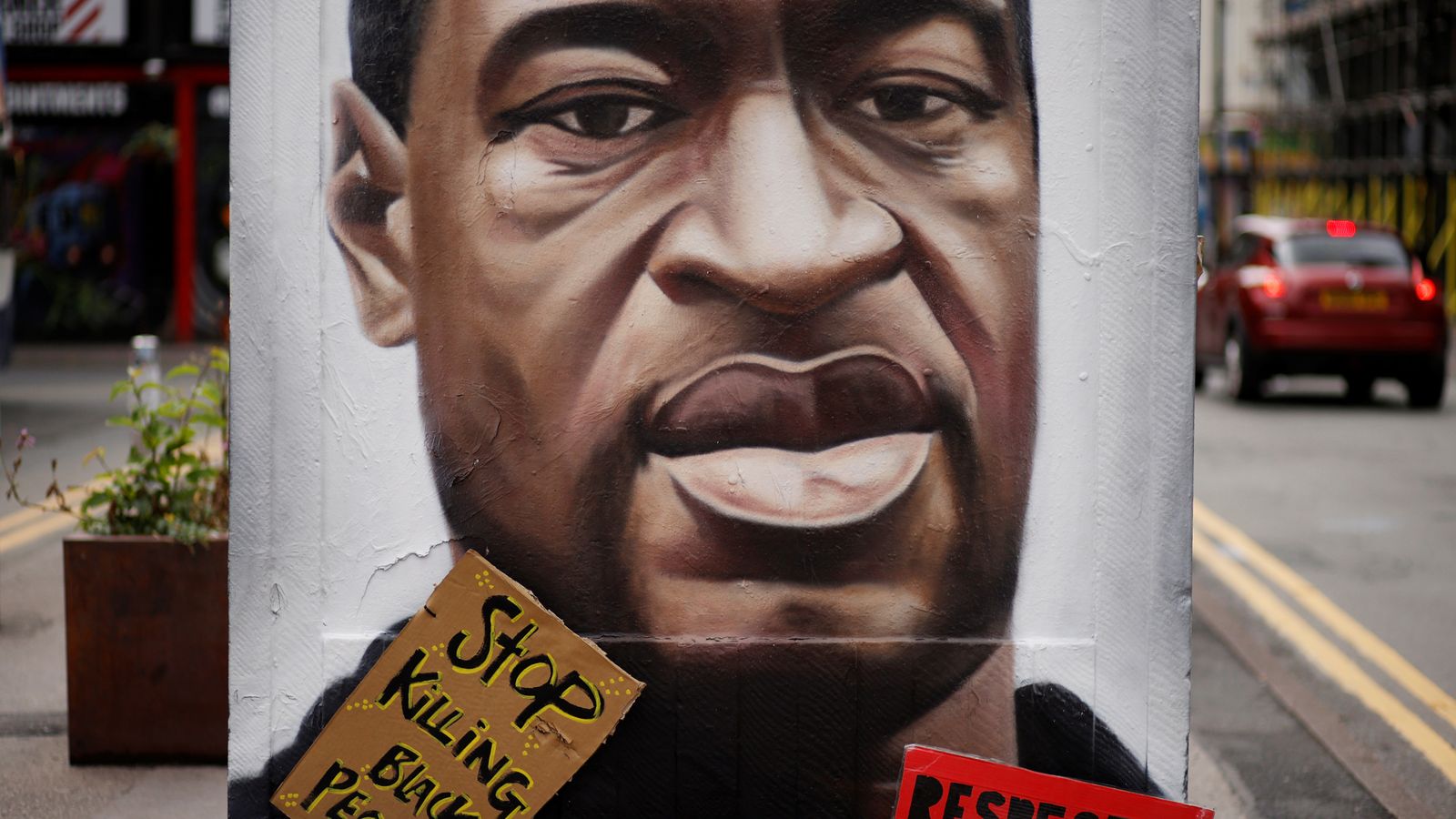 Three men have been arrested on suspicion of criminal damage after a George Floyd mural in Manchester city centre was defaced.

Police said they were called to reports of damage to the artwork in Stevenson Square at around 1.30am on Sunday.

After establishing it had been defaced, Greater Manchester Police (GMP) officers made enquiries and found three men nearby who were arrested on suspicion of criminal damage.

They remain in custody for questioning.

Image: George Floyd’s death sparked protests across the US and around the world

Chief Inspector Denise Pye, of GMP’s City of Manchester division, said: “This kind of criminal damage is totally unacceptable and will absolutely not be tolerated.

“I understand incidents like this will cause frustration across the district as this behaviour does not reflect our brilliantly diverse and inclusive communities.

“Thankfully officers swiftly attended and following a number of lines of enquiry including CCTV analysis were able to arrest three people in connection with the incident. I would encourage any witnesses or anyone with any information to get in touch.”

The damage itself wasn’t racist and there is no suggestion that the incident was racially motivated, but enquiries are ongoing to establish the circumstances, GMP told Sky News when asked how the artwork was damaged.

It’s the third time the mural has been attacked, according to the BBC. The other two occasions – last month and in July last year – were racially motivated.

The portrait was painted by the street artist Akse in memory of Mr Floyd, who died after being arrested in Minneapolis in May 2020.

His death, after a white police officer knelt on his neck for almost nine minutes, provoked a huge backlash across the US and the world, demanding an end to racial injustice and police brutality.

The criminal trial of former Minneapolis officer Derek Chauvin on charges of third-degree murder, second-degree murder and manslaughter, is due to begin on Monday.

On Friday, Minneapolis City Council said it will pay Mr Floyd’s family $27m (£19.4m) to settle a civil lawsuit over his killing.

Mr Floyd’s family filed the federal civil rights lawsuit against the city last July, alongside ones against Chauvin and three other officers who were fired and criminally charged over his death.

The civil dispute is separate from the criminal trial.

Anyone with information about the damage to the Stevenson Square mural is asked to call police on 101, quoting incident number 253 of 14/03/2021, or call the independent charity Crimestoppers – anonymously – on 0800 555 111.