Grammys 2021: Beyoncé becomes most decorated female artist ever as women sweep the board at LA ceremony 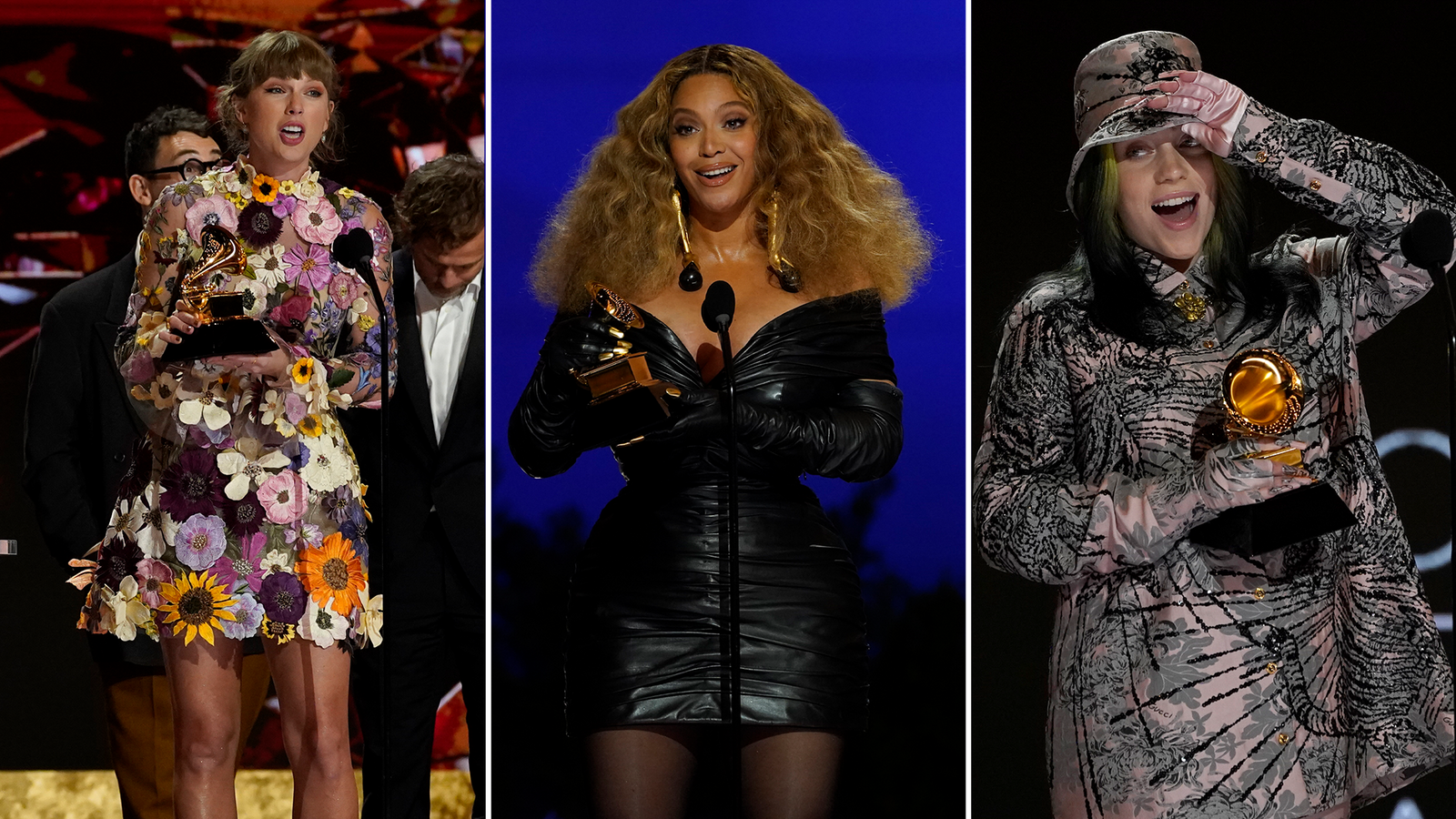 Beyoncé has made history by becoming the most decorated female Grammy winner ever, after picking up her 28th award in the socially-distanced LA ceremony.

On the biggest night of the year for music, the singer walked away with the gongs for best R&B performance for Black Parade, best music video for Brown Skin Girl and best rap performance and best rap song for Savage – her collaboration with Megan Thee Stallion.

Queen Bey is now tied with record producer Quincy Jones for the second most Grammy wins ever, with the most being held by the late Hungarian conductor Georg Solti, who won 31 awards.

You can read all the winners from the 63rd Annual Grammy Awards here.

Beyoncé’s husband, Jay Z, shared the award for best rap song as he co-wrote Savage, and nine-year-old daughter Blue Ivy took home her first Grammy for her part in the video Brown Skin – shoring up the Carter family’s place in music royalty.

Collecting her gong for best R&B performance for Black Parade, she said: “As an artist I believe it’s my job, and all of our jobs, to reflect time and it’s been such a difficult time.

“I have been working my whole life… this is such a magical night.”

She also paid tribute to the “beautiful black kings and queens” in the world.

Also making history, Taylor Swift took away what is considered one of the biggest awards of the night, album of the year, for her surprise record folklore, which she dropped in July last year.

It makes her the first woman in Grammys history to win the award three times, having previously won with 1989 and Fearless.

Image: Taylor Swift picked up the gong for best album for the third time in her career. Pic: AP

Billie Eilish walked away with record of the year for Everything I Wanted, with the 19-year-old beating off the likes of Doja Cat, Post Malone and two tracks from Beyoncé.

Accepting the award on stage with her song-writing partner and brother, Finneas O’Connell, she paid tribute to best new artist winner Megan Thee Stallion, saying: “You deserve this. You had a year that I think is untoppable.

“You are a queen… Genuinely, this goes to her. Can we just cheer for Megan Thee Stallion, please?”

Image: Billie Eilish accepted the award for record of the year alongside her brother, Finneas O’Connell. Pic: AP

H.E.R took the award for song of the year for I Can’t Breathe – an anthem she wrote in the wake of the police killings of unarmed black people last year, landing her one of the big four awards.

The former One Direction singer accepted the award at the Los Angeles Convention Centre, saying: “I feel incredibly lucky to get to work in music and make music as my job every day and this is an incredibly sweet icing on the cake of what I get to do everyday, so thank you so much.”

In his opening monologue, The Daily Show host said of the distanced artists that there was “more tension in that tent than at a family reunion at Buckingham Palace,” a reference to the recently aired Harry and Meghan interview with Oprah.

The televised show was a mixture of live and pre-recorded segments, with some of the awards presented from music venues across the US that had been forced to close as a result of the pandemic, including The Troubadour in Hollywood, Harlem’s Apollo Theatre and Nashville’s Station Inn.

Among other highlights, Taylor Swift performed a medley of songs from her lockdown albums folklore and evermore, while Harry Styles opened the show with his now-Grammy winning track, Watermelon Sugar.

Billie Eilish also took to the stage in Los Angeles to perform track of the year, Everything I Wanted, and a lyrically-watered down, but still visually risque, version of the song WAP was sung by Cardi B and Megan Thee Stallion.

This year’s ceremony was not without its controversy though, with accusations of secret voting and bribery being made by those who had been snubbed.

The Weeknd said last week that “because of the secret committees” he’ll no longer let his record label submit his music to be considered, while former One Direction member Zayn Malik said that unless artists “shake hands and send gifts” they stand no chance of being recognised. Both artists had been left off nominations lists.

It was a night dominated by women.

Despite making up only just over 20% of the nominees – female acts took home the big four Grammy prizes – album, record, song of the year and best new artist.

Women also made history. Beyoncé, who led the nominations, picked up four gongs, becoming the most decorated female in Grammy history with 28 career wins in total.

The 39-year-old star’s acceptance speech celebrating “all the beautiful black queens and kings” that have inspired her summed up the theme of a night, which pulled together political performance, powerful speeches, and a first-time nomination for a black woman in the country solo performance category.

Lil Baby put racial inequality centre stage in a wide-spanning performance of his track The Bigger Picture, addressing the treatment of black people in the US.

In her acceptance speech for song of the year – I Can’t Breathe – a protest song written in the memory of George Floyd, H.E.R. urged fans to: “Remember, we are the change that we wish to see. That fight that we had in us in the summer of 2020, keep that same energy.”

British acts made their mark, with former One Directioner Harry Styles opening proceedings with a performance of Watermelon Sugar, which went on to win best pop solo performance.

While Dua Lipa – who praised the virtue of positivity during a difficult year – bagged best pop solo album for her acclaimed second album Future Nostalgia.

Made up of part pre-recorded, virtual and socially distanced elements, the four-hour show – hosted by comedian Trevor Noah – was the first award ceremony in the past 12 months to feel close to the star-packed events we’re used to.

It will no doubt pave the way for 2021’s awards ceremonies to come – not least the Oscars next month.