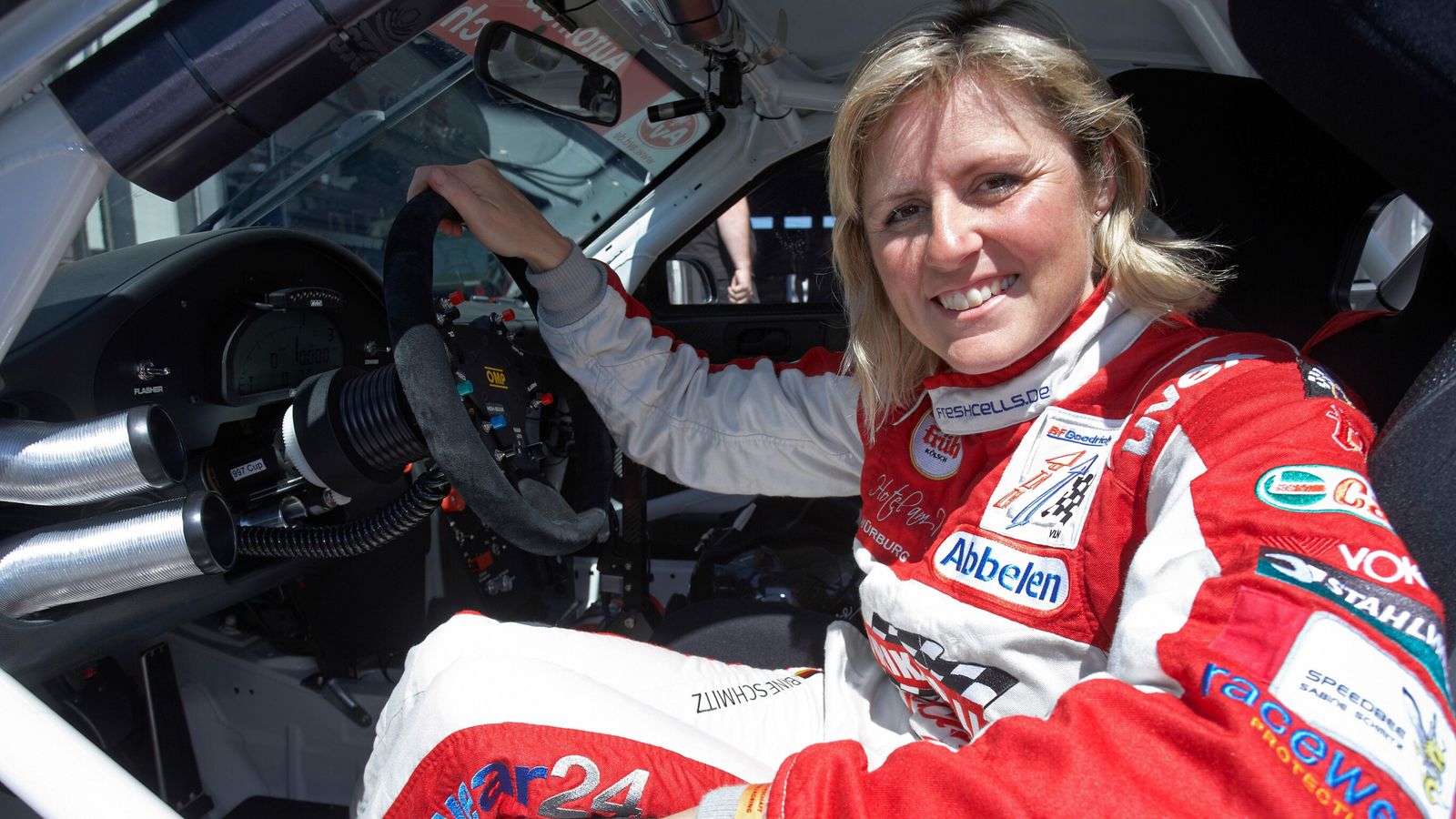 The German, widely known as the “Queen of the Nürburgring”, had suffered a long illness with cancer.

A statement issued by the famous German racetrack said: “The Nürburgring has lost its most famous female racing driver.

Image: Schmitz was known for her appearances on the BBC’s Top Gear Pic: PinPep/Shutterstock

“Sabine Schmitz passed away far too early after a long illness. We will miss her and her cheerful nature. Rest in peace Sabine!”

The death of Schmitz, who regularly featured on BBC One show Top Gear, prompted an outpouring of tributes.

Former presenter of the show, Jeremy Clarkson, who appeared alongside her in a number of episodes, said: “Terrible news about Sabine Schmitz. Such a sunny person and so full of beans.”

Current presenter Paddy McGuinness said: “She gave me pointers on how to drive a Ferrari very fast and hunted me down in a banger race.

She gave me pointers on how to drive a Ferrari very fast and hunted me down in a banger race. Brilliantly bonkers and an amazing human being! RIP the great Sabine Schmitz. pic.twitter.com/awtbOnMD90

“Brilliantly bonkers and an amazing human being! RIP the great Sabine Schmitz.”

Another Top Gear presenter, Chris Harris, also posted an image of himself with Schmitz, saying: “Rest in peace you wonderful, powerful, hilarious person.”

Sophia Flörsch, a fellow German female racing driver, said she had been inspired by Schmitz.

“Sabine is the queen at @nuerburgring. She always will be unreachable in the Green Hell. Seeing her races was inspirational and motivating. My deepest condolences to the family. RIP Sabine.”

A tweet posted by the official account of Porsche, whose cars she raced competitively, said: “Very sad to hear that Sabine Schmitz (1969-2021) has passed away. The “Queen of Nordschleife” was a crowd favourite due to her open, humorous way.

“The two-time @24hNBR winner was an icon at the wheel of the #Frikadelli #Porsche. Our sympathy goes to her family and friends.”

Image: Sabine Schmitz posted this image when she announced her longstanding illness with cancer

Schmitz had previously revealed that she had been suffering with cancer since 2017.

Following her withdrawal from a race, she said in a statement issued last July: “Dear friends of professional motor sport.

“Many of you have probably wondered why I was on the list of participants on our Porsche in the NSL and then didn’t drive after all.

“I would like to provide enlightenment here, I think I owe it to my/our fans! Since the end of 2017, I have been fighting an extremely persistent cancer that has not been eliminated with the resources so far.

“It got a little better – but now it’s come back with full force.

“Now I have to draw all the strength and nerve to master the next powerful therapies … hoping something [good] will happen.

“So I say goodbye ‘probably’ for the first time this season. In addition, I would like to thank everyone for their help and support in my everyday life, and encouragement in writing!”