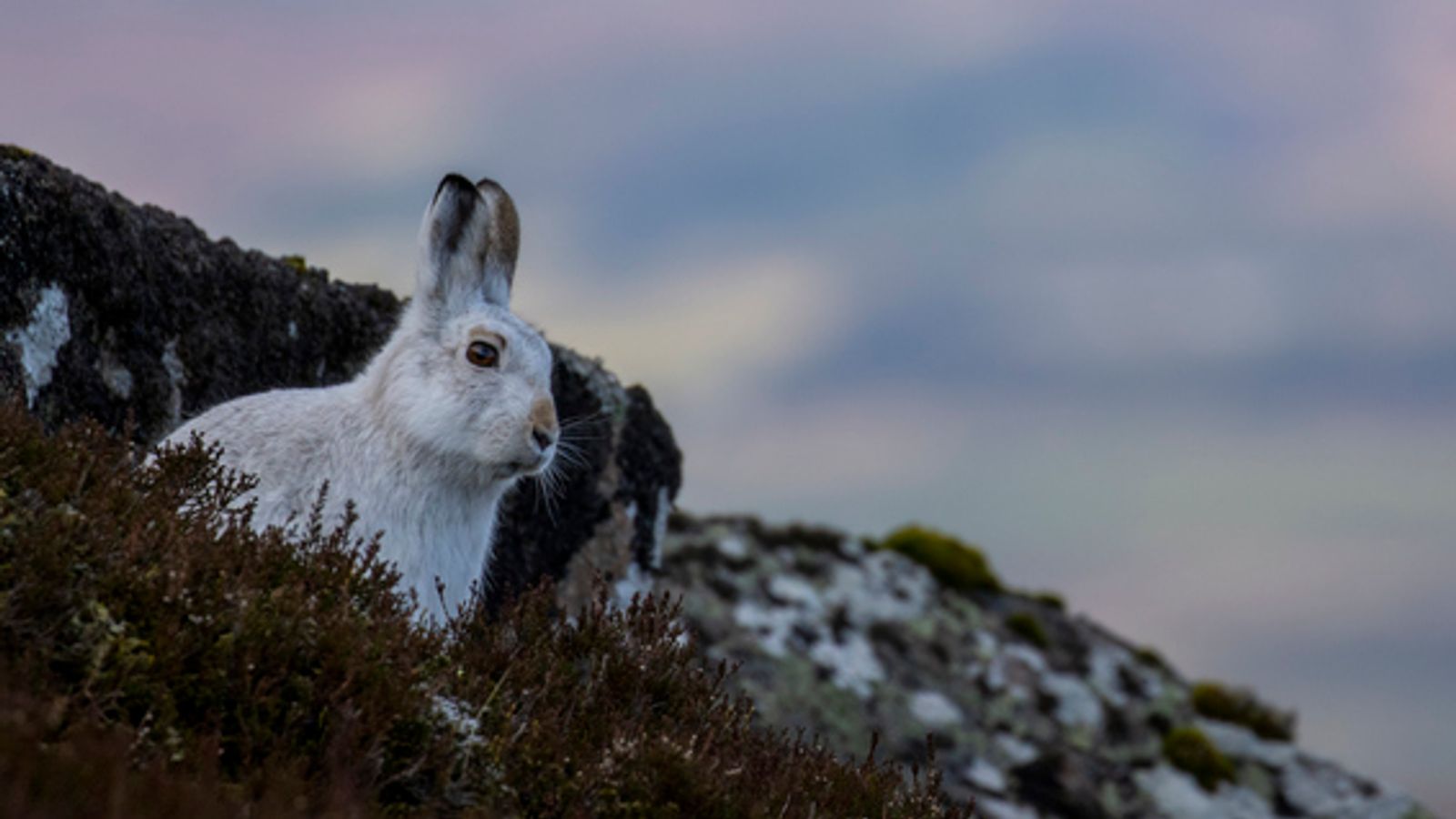 England’s last mountain hares – which date back to the ice age – could be in danger from climate change, according to an expert who has spent five years studying them.

Carlos Bedson, a wildlife researcher from Manchester Metropolitan University, thinks there are only 2,500 left in the Peak District in Derbyshire.

“You would say they’re an iconic animal for the Peak District, much loved, we’re so privileged and lucky that we can come out and see these Arctic species,” Mr Bedson told Sky News.

“We’ve seen a few mountain hares here today, but here in 30 years’ time it will be three degrees warmer and mountain hares may not be around because they do not like it being so warm, they’re cold-adapted.

“They’re going to go way up higher and their range is going to shrink from about 160 square km to about 20 square km.”

Mountain hares, which have white fur in winter and brown pelage in summer, died out in England and Wales as the climate warmed 6,000 years ago.

They were reintroduced in the 1870s, but only the ones in the Peak District survived.

In Scotland, there are around 135,000 mountain hares, and unlicensed culling is a criminal offence.

Image: The mountain hare thrives in Scotland but numbers in England are tiny in comparison

Now ministers are examining what more needs to happen to protect the ones left in England.

A spokesperson for the Department of Food Environment and Rural Affairs (Defra) said: “The government recognises the importance of preserving our iconic brown and mountain hare populations – and we are exploring a range of options to help drive their recovery across England.”

Mr Bedson explained that while hunting was a threat to them, around 100 mountain hares a year are also killed on the roads running through their habitat in the Peak District.

Image: The hare is well known for its winter camouflage

A hotter climate may also have an impact on heather, their main food source, and mean they have to compete for food with their common sister species, the European brown hare.

Image: The hares may be forced higher in the Peaks as they search for a cooler habitat

Nida Al-Fulaij, the trust’s grants manager, said: “The threat of climate really is scary, because there’s very little we can do.

“We will have to firefight as a response, but who knows if that will be sufficient for these hares?

“They really are important for us as the rest of the mountain hares are restricted to Scotland, and being an island nation we already have limited species compared to the continent and more bio diverse areas, so we really want to make sure they survive.”

The heatwave of 2018 saw wildfires on the moorlands destroy the mountain hares’ habitat and an extraordinary amount of wildlife.

Conservationists have been working to repair the damage to the blanket bogs in the Peak District.

“We’ve blocked over 3,000 gulleys up there in the Dark Peak and we’re also transplanting thousands of sphagnum plug plants to re-vegetate the wetland habitat, and that will directly benefit the mountain hare which is able to thrive in that harsh environment,” explained Ben McCarthy, head of nature conservation at the National Trust.

He added: “I don’t think there’s widespread understanding of how many of our species are on the brink of extinction.

“And actually the mountain hares are a good example where we’ve got this remnant population just hanging on by its claws against this environmental change that’s happening around them.”

COVID-19: ‘Bleak future’ for UK pubs as they mark a year since first lockdown closures