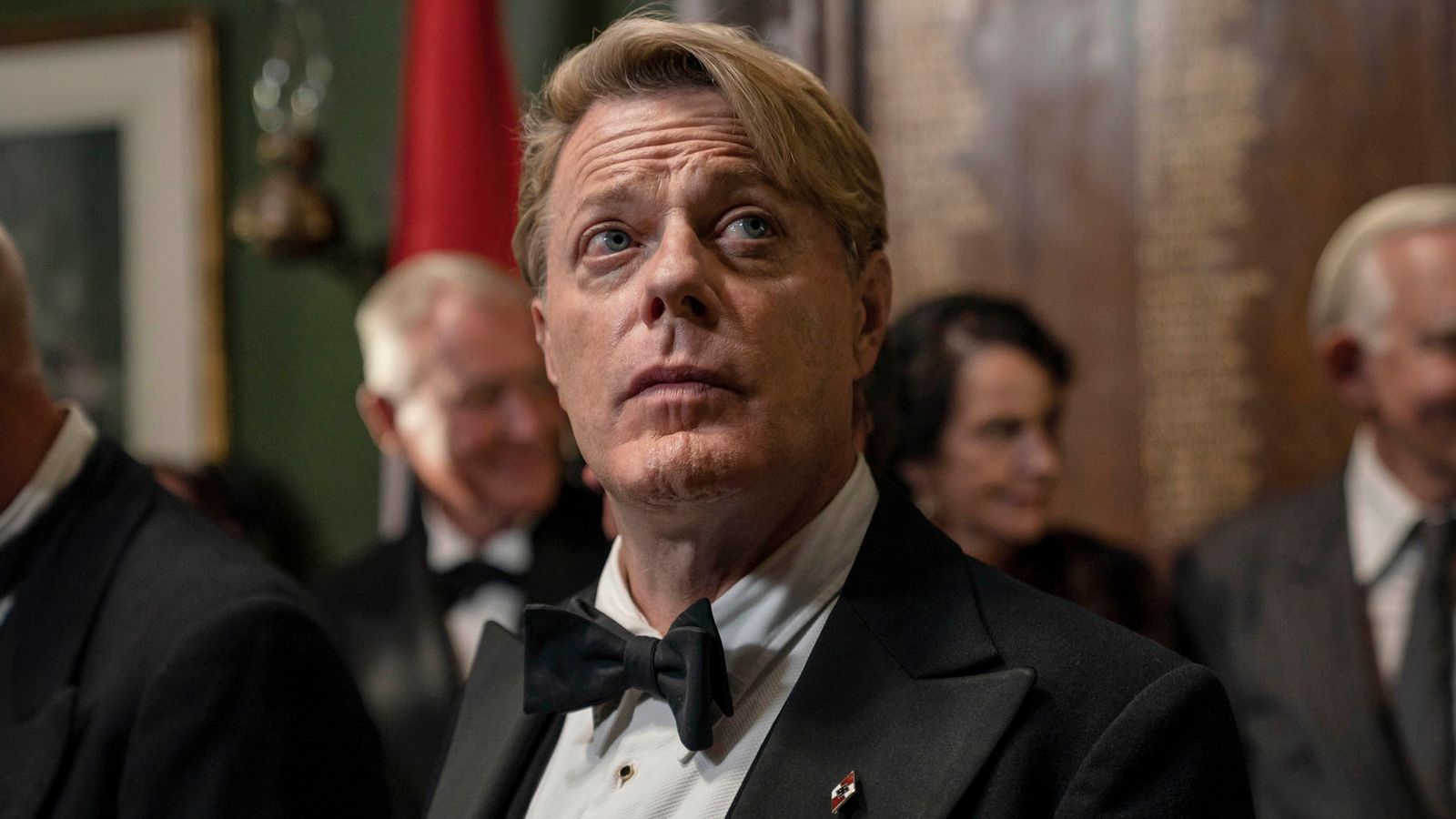 Eddie Izzard has been speaking openly about her gender fluidity for years, but the comedian and actor’s latest role has bought home how lucky she is to live in modern times.

The comedian and actor’s latest project – period thriller Six Minutes To Midnight – which is set in the summer of 1939, just before the onset of World War II belongs to a time of more restricted freedoms.

She tells Sky News: “I consider being trans a superhero thing – I wanted to put it in a very positive light with superheroes because some people are so negative about LGBT stuff.

“I’ve been out and open about it since 1985, it’s a long time… And if we go back to the 1930s, if I’ve been in Nazi Germany, I would have been murdered for saying that I was trans.

“Gay people were put in concentration camps. That’s what this extreme right-wing thinking will do.”

And while the film may be set in history, she hopes that parallels with today’s ever polarised society will help prompt a “twenty first century coming of age of humanity”.

Izzard, who announced her intention to use the pronouns “she” and “her” during an appearance on Sky Arts’ Portrait Artist Of The Year late last year, says that just the act of coming out as trans has helped her get to “a better mental health place”.

She has since clarified that she will use “girl mode” for comedy and political activism but revert to “boy mode” for dramatic roles – such as her latest one playing supply teacher Thomas Wheatley.

However, there is more to the part of Wheatley than meets the eye, who away from singing songs and teaching Latin is also an undercover British spy.

With running, jumping and fight scenes aplenty, Izzard admits action lead isn’t normally her go-to casting (despite her insane talent for endurance marathons which recently helped her raise over £300,000 for charity).

Izzard explains: “As someone with my history and coming out as trans way back in 1985, people say: ‘Oh, well, you’re not someone who does action stuff’, but I am really an action person, as people now know… I do a good deal of running in this film.”

The 59-year-old – who has previously identified as a transvestite – admits it’s a risk for a performer to speak out in such a way, but the fact she’s established in her career has encouraged her to stick her head above the parapet without being overly cautious about being shut out of future castings.

And for Izzard, her latest film which she not only stars in, but also co-wrote and produced, has a very personal resonance.

Set in in a finishing school for daughters of the Nazi elite in Bexhill-on-Sea on the south coast of England, Izzard – who spent much time in the area as a child – was first introduced to the real-life story at a local museum.

After being shown a picture of a school badge featuring a Swastika on one side and the Union Flag on the other, she knew it was a hidden slice of Nazi history she needed to reveal.

Izzard later toured the building that was the Augusta Victoria College for girls along with co-star Dame Judi Dench.

Image: Izzard spent some of her childhood in Bexhill-on-Sea. Pic: Six Minutes To Midnight/Sky Cinema/Lionsgate

Now a home for those with dementia, its walls previously housed students including Heinrich Himmler’s goddaughter and Joachim von Ribbentrop’s daughter back in the 1930s.

With the intention of teaching the girls English, and allowing them to network with right-wing influencers of the time, Izzard says: “They would listen to speeches on radio and would get up and salute the radio as if they were there in the meeting with Hitler.”

And the school wasn’t a one-off – there were 26 such finishing schools for girls in Bexhill ahead of the World War II, a little-known fact that Izzard calls “quite bizarre”.

Calling it “a lesson from history”, Izzard says the film has a particular resonance for our times.

Image: The the Augusta Victoria College for girls was one of 26 such schools in the area. Pic: Six Minutes To Midnight/Sky Cinema/Lionsgate

Addressing the issue of fake news, which to some seems like a very modern invention, she says Hitler’s use of “lies as a tool of politics” is something we’d all do well to take note of.

“[Hitler] was just stirring people up and appealing to people’s base instincts, but unfortunately, we’re going to this time again where people say, ‘Oh, come on, hate these people, hate those people, believe in conspiracies’.

“Just rubbish is going on – some people saying: ‘Let’s try the 1930s all over again, let’s have another bash at that’. But those who do not learn from history are doomed to repeat it.”

And Izzard is clear, it isn’t just a film portraying Germany as bad, and Britain as good. She says it’s a far more complex issue than that.

“I always wonder if I’d grown up in Germany in the 1930s, would I have joined the Hitler Youth? Would I have signed up for this thing? Would I have tried on one of those uniforms?

“I hope that I would have said: ‘No, this is rubbish. This person is lying.’ And some Germans did, but you don’t hear much about those stories.”

Summing up his approach to the movie, Izzard concludes: “This is a story of fighting the hearts and minds with a thriller wrapped all around.”

Six Minutes To Midnight is available on Sky Cinema and NOW TV from Friday 26 March.