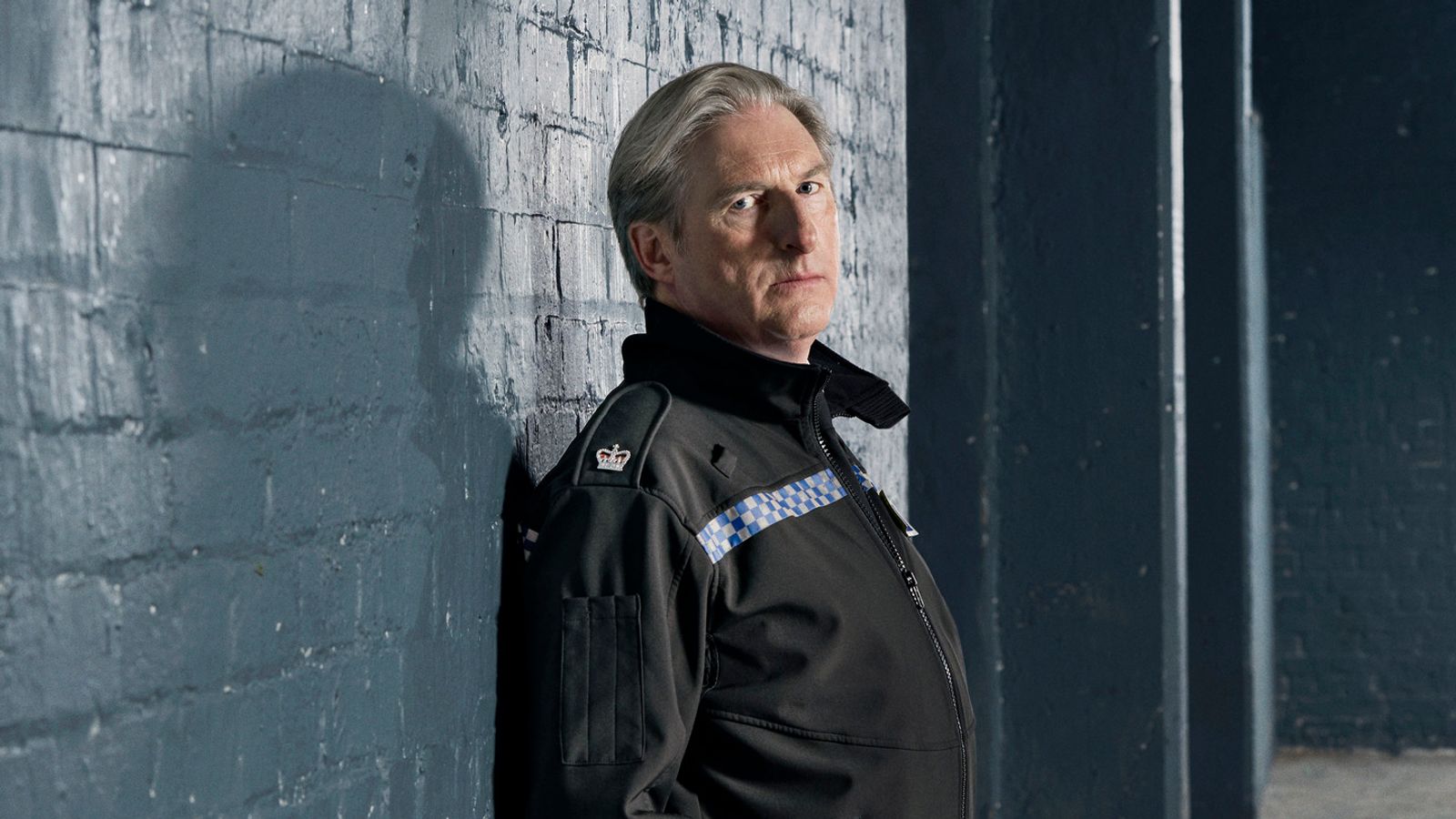 For the DIR, for the next few weeks we’re only interested in one thing here and one thing only – and that’s catching bent coppers.

Line Of Duty fans, almost two years since we last visited AC-12, the wait is finally over. Not since Game Of Thrones’ controversial swansong has there been such feverish anticipation around a TV series’ return.

Thanks to its tense and twisty scripts, stellar performances from core stars Adrian Dunbar, Vicky McClure and Martin Compston, and a roster of brilliant guest actors – plus Superintendent Ted Hastings’ knack for an incredibly quotable catchphrase, fella – it has become one of the biggest shows on British TV.

Season six picks up 18 months on from the last series, and we have questions: who is H? (Obviously). Has Hastings not been conducting himself to the letter of the law? (Say it isn’t so!). Will DS Steve Arnott ever get promoted? More importantly, will he be sporting a new line in natty waistcoats?

Writer Jed Mercurio and the cast are remaining tight-lipped on details and there are no spoilers, but we can tell you that this series is going to be seven episodes, up from six, and you can listen to our review of episode one in this week’s Backstage, Sky News’ entertainment podcast.

As well as that, here’s what you need to know about Anti-Corruption Unit 12’s investigations so far – and all the details for the new series. Warning: this article contains mild spoilers for previous series, but not season six.

First up: who is H? As we found out at the end of the last series, there is no one H – which, by the way is a codename for the corrupt police boss/bosses that control the OCGs (organised crime gangs; Line Of Duty loves an acronym). There’s a fourth and final H still to be uncovered, and as the series have gone on, fingers have been pointed at our heroes.

Hastings (Dunbar), for example, was looking decidedly dodgy in series five thanks to a big wad of £50 notes and the disposal of a laptop. And DI Kate Fleming (McClure) is looking a bit shady in the trailer. Or will it be another officer they’ve encountered along the way? Will we even find out this series? Will there be another twist to the mysterious tale of H? Will the questions ever stop?

“When I saw the trailer the other day, it was quite a shock to me,” Dunbar said ahead of the series airing. “Once you see it all put together, you go, God, this really is going to be something else.”

No mention of H, though. You can’t trip Hastings up, can you? However, is this a teeny bit of a clue from Mercurio?

“This is still a ghost haunting AC-12, but it it haunts the characters in different ways,” the writer has said. “And if you’re chasing something that has tormented you, there are some people who are going to have to redouble their efforts and there are some who maybe want to drift away from from that particular endeavour. But maybe it’s time to give up.”

Another cliffhanger at the end of series five was the finale for young OCG member Ryan Pilkington, who we saw successfully joining the police. He won’t be the first, but what will the baddies having an inside man mean for AC-12?

Plus, in series five, we got to learn a bit about Hastings’ background in Northern Ireland, and his time in the Royal Ulster Constabulary. It turned out he had a link to John Corbett (Graham’s character), and we definitely haven’t heard the full story yet…

Eagle-eyed fans spotted that a QR code on a magazine featured in the trailer leads you to some highly sensitive information – a PDF file entitled “Operation Easter Egg Hunt”.

The confidential document turns out to be a letter from Chief Constable Philip Osborne, played by Owen Teale, to DCC Andrea Wise, played by Elizabeth Rider – and its contents don’t look good for Hastings.

Image: A QR code in a trailer for Line Of Duty series six revealed this letter. Pic: Line Of Duty

“Should AC-12 even be led by someone who himself has been accused of corruption?” the chief constable asks. “The question is what to do next. Is it time for a leadership change? What role should Ted Hastings have in this organisation – if any at all?”

Some fans then spotted another clue (these guys are good, perhaps this is Mercurio’s way of recruiting) in the bolded word “next” – a hyperlink to a prescription for Steve Arnott, who has been having back trouble ever since he was thrown over a banister by Balaclava Man (one of) in series four. It looks like he’s on a lot of painkillers.

And it didn’t stop there, with Morse code on the prescription directing you to a YouTube news report presented by Gail Vella (remember that name) on Operation Peartree, the inquiry into bent coppers. And then (yes, there’s more) a link under the video takes you to a Google Maps image of a street in Birmingham.

That’s a lot of sleuthing.

Image: DCI Davidson is investigating an unsolved murder case. But is she doing it to the letter of the law? Pic: BBC/World Productions/Steffan Hill

DCI Davidson is a senior investigating officer on the high-profile but unsolved murder case of a woman named… Gail Vella. We’re not sure what DCI Davidson has been up to, but her suspicious conduct has attracted the attention of AC-12. “It’ll be our job to detect whether police corruption has contributed to this murder remaining unsolved,” says Hastings, in the trailer. I’m going to go out on a limb here and guess that it has.

Incredibly, Macdonald had never seen the show before she got the role (she’d not been living under a rock but filming in New York).

“I spent a number of years in New York filming and I missed a huge amount of British pop culture,” she said, speaking before the series launch. “When I came back after I finished Boardwalk Empire, I had missed out on a lot of TV and there was people I didn’t know, there was comedians I didn’t recognise that were really popular. And so Line Of Duty sort of happened while I was away.”

Macdonald has been catching up since landing the role, though, so she gets the gist. While her character is doing well in her career, she has described her as “tortured” and “lonely”.

Image: ‘One thing and one thing only. Bent coppers. Got it’: Shalom Brune-Franklin joins the cast as DC Chloe Bishop. Pic: BBC/World Productions/Steffan Hill

And what about DC Chloe Bishop?

DC Bishop is a new member of AC-12, so will be doing her bit to catch the bent coppers. Or will she? You never know with Line Of Duty.

“Like anyone starting a new job, she’s so eager to prove to her bosses that she was the right choice,” Brune-Franklin has said of her character. “She’s incredibly hardworking and we can see she’s really trying to impress. She’s on a journey to capture bent coppers!”

Image: ‘I want an IR on the OCG UCO’s RTC. OK?’ Vicky McClure is back as DI Kate Fleming. Pic: BBC/World Productions/Steffan Hill

Keeping track of the twists and turns

A lot has happened since Line Of Duty launched in 2012. Fans of the show will know Mercurio likes to throw in shocks whenever he can, even in the the very first episodes. This series, they’ll “delve into past cases a little bit”, he has said.

“The way that we do that is show that like any police unit, they keep records. And when we dig into those files, hey presto, we see reminders of previous seasons.”

So expect throwbacks to the older investigations. Want to know who the Caddy is? How did Jackie Laverty end up in a freezer? What happened to DCI Roz “the wee witch” Huntley’s arm? And what, exactly, did DS Arnott get up to with DI Lindsay Denton?

If you don’t know, it’s perhaps advisable to have a recap.

What’s in store for Kate, Steve, and Hastings?

Again, the actors aren’t revealing anything. They’ve certainly learned how to keep quiet under interrogation. What we do know is that at the beginning of the series, Steve Arnott is still a DS, so still no promotion! After everything he’s done to catch bent coppers! He sees AC-12 as tainted, so there’s a sense he’s not that happy.

Hastings, who we saw in series five living in a hotel after splitting with his wife (and having to contend with a broken toilet on top of police corruption; when is he going to catch a break?), is “up against quite a bit” at work, and in his personal life.

“A bare-faced liar, promoted to our highest office,” he says in the trailer, and then: “When did we stop caring about honesty and integrity?”

Fans have been increasingly concerned that DI Fleming could be a baddie after all. “Do you still believe there’s a fourth man out there?” Steve is asked in the trailer. “Man… or woman?” he replies, as it cuts to Kate. A true Mother Of God moment, if ever there was one.

That’s knowing your Line Of Duty acronyms, fella. Macdonald says she had to do her homework, but fortunately there were a few helpful hints on set. “There would be certain acronyms that we would discuss,” she said. “But also in hair and make-up, they had a list pinned up, which was quite helpful.”

If you’ve not brushed up, here’s a few to take note of:

And the Hastings catchphrases

As well as bent coppers, viewers will also be looking out for Hastings’ famous sayings, which have become so popular that fans now play Line Of Duty bingo. Look out for these and more:

• “Mother of God!”
• “I didn’t float up the Lagan in a bubble.” (referring to the Lagan, the river that runs through Belfast)
• “Now we’re sucking diesel!”
• “You have the right to be questioned by an officer at least one rank senior.”
• “My officers conduct themselves to the letter of the law!”
• “There’s only one thing I’m interested in, and one thing only – and that’s catching bent coppers.”

Line Of Duty is back on BBC One from Sunday 21 March. Hear our spoiler-free review of episode one in this week’s Backstage, Sky News’ entertainment podcast