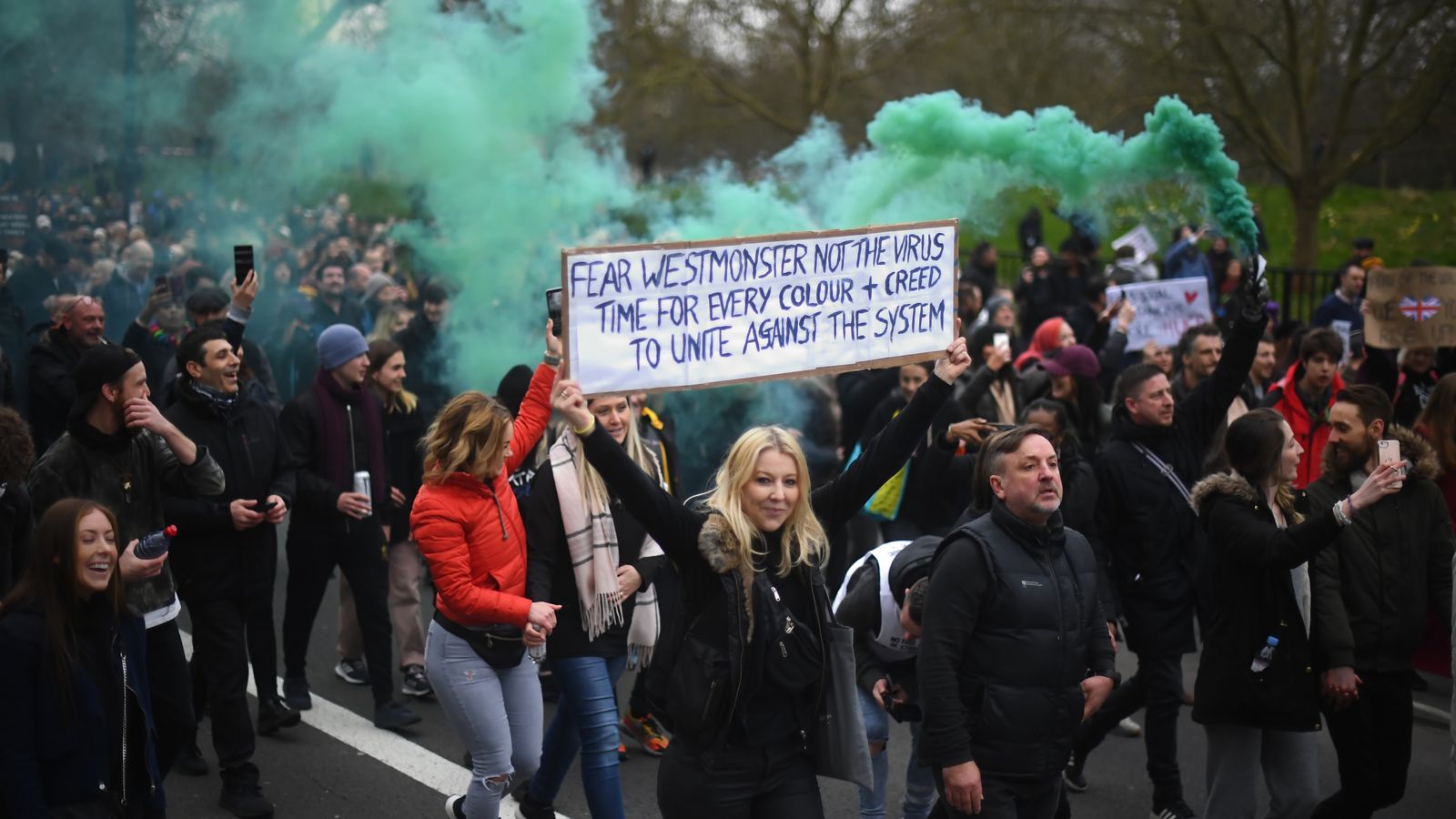 Thirty-six people have been arrested during a protest by anti-lockdown campaigners in central London.

Most of the arrests were for breaching COVID-19 regulations, Scotland Yard said.

Officers were forced to run back to their vans as protesters threw bottles and cans at them in Hyde Park.

A group of about a hundred chased police vehicles as they left the area, punching and kicking them.

Members of the public with small children were seen leaving the area.

Around a hundred officers in riot helmets and carrying shields arrived in the park and urged people to go home.

Image: Thousands of people marched down Oxford Street on Saturday

Thousands of demonstrators gathered after more than 60 MPs called on the home secretary to ease coronavirus restrictions for protests.

Sky News correspondent Enda Brady, in Hyde Park, said about six people were arrested after the police moved in quickly, dispersing between 400 and 500 people who had gathered to hear Mr Corbyn speak.

Holding placards such as “Fear Westmonster not the virus” and “Stop destroying our kids’ lives”, the protesters then marched along Oxford Street, Chancery Lane, the Embankment and Parliament Square before heading up Whitehall.

Scuffles between the police and protesters took place as some were seen pushing lines of officers out of the way, while many were not wearing masks.

Deputy Assistant Commissioner Laurence Taylor, who led the policing operation, said: “This was another challenging day for our officers and I would like to thank them for their professionalism.

“Throughout the day, officers sought first to engage with people who had gathered to explain that their actions were unlawful under the COVID-19 regulations, and encouraged them to go home to help protect themselves and others during this public health crisis.

“Where this approach did not work and officers were met with hostility, police enforced the regulations and made arrests.”

The protest came on the same day as more than 60 MPs signed a letter addressed to Priti Patel, organised by campaigns group Liberty and Big Brother Watch, warning that allowing the police to criminalise people for protesting “is not acceptable and is arguably not lawful”.

Under current restrictions, it is unlawful for groups to gather for protests and police warned people on Saturday not to head to central London for planned demonstrations, including the anti-lockdown protest.

The letter follows last week’s outcry over the Metropolitan Police’s handling of the vigil on Clapham Common in memory of Sarah Everard.

It said such “shocking scenes” were “entirely avoidable” if the government had provided guidance to police and ensured protests were clearly exempt from the ban on gatherings under lockdown.

Image: Up to 500 protesters marched and listened to Piers Corbyn speak Image: Many of the protesters were not wearing masks Image: The protest went from Hyde Park to Trafalgar Square and the Houses of Parliament

Sam Grant, head of policy and campaigns at Liberty, said: “In a healthy democracy, protest is a critical way we can fight for what we believe in.

“The government’s current quasi-ban on protest is completely unacceptable.

“Last week, the police conceded protest is not banned under the lockdown regulations, but used them to threaten then arrest demonstrators anyway.

“The home secretary must immediately issue guidance to all police forces to ensure socially distanced protests can go ahead and create an explicit exemption for protest in the current regulations.”

Big Brother Watch director Silkie Carlo added: “A country cannot be described as a democracy if people do not have the freedom to protest.

“The harrowing scenes of police officers using force against women at Clapham Common recently were avoidable and wrong.

“Over the past week, many more demonstrators and even legal observers have been arrested or fined.

Image: There have been demonstrations across the UK against lockdown restrictions since they began a year ago

“This stain on our democracy is a direct consequence of this government’s disrespect for the most basic of British democratic freedoms.”

In response, a government spokesman said: “While we are still in a pandemic, we continue to urge people to avoid mass gatherings, in line with wider coronavirus restrictions.”