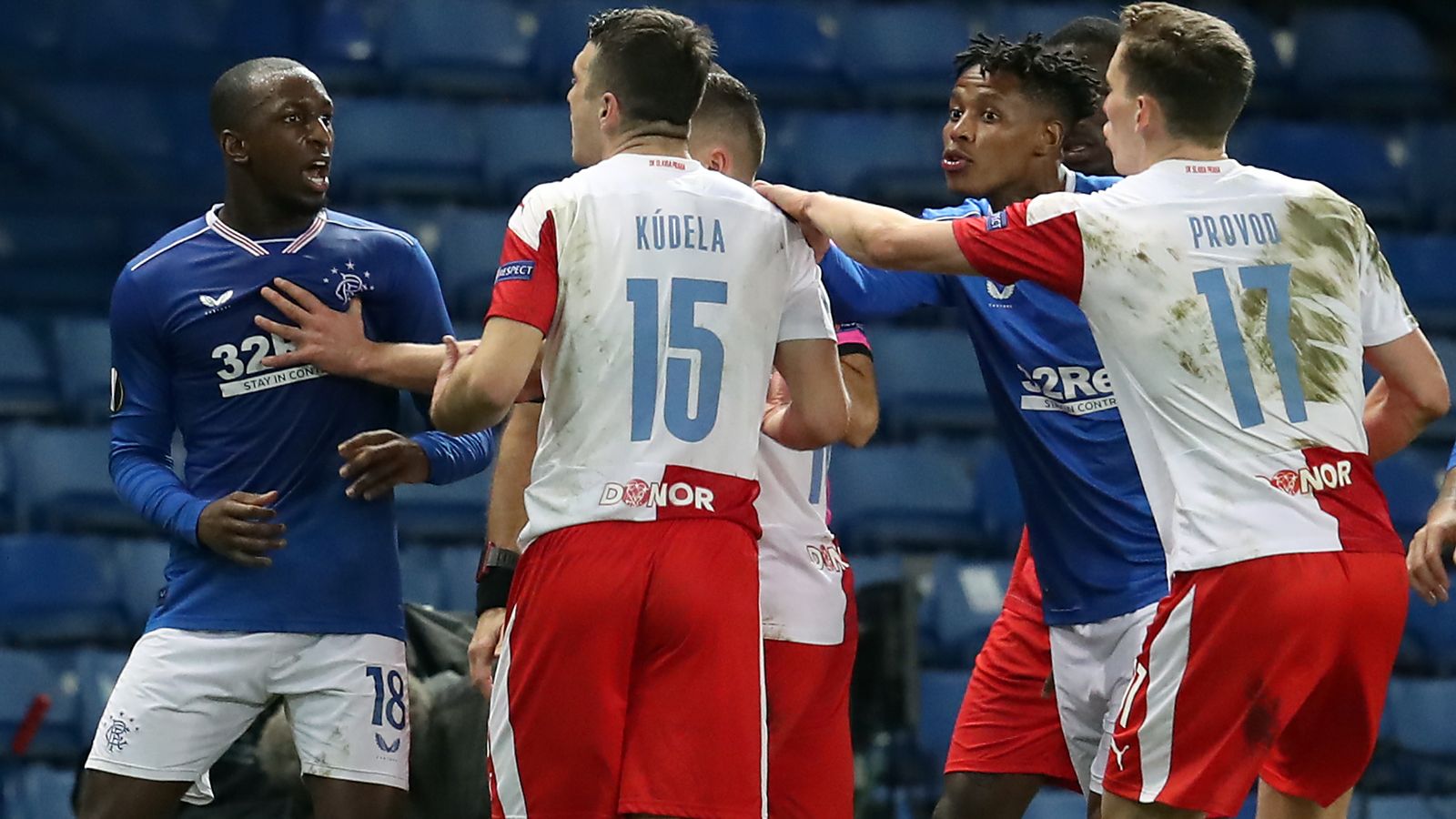 A Rangers footballer has accused a player from a Czech team of “vile racist abuse” during a confrontation on the pitch.

Angry confrontations erupted towards the end of Rangers’ 2-0 defeat at Ibrox, which saw the Scottish Premiership winners knocked out of the European tournament.

Kamara, through his lawyer, gave a graphic account of the alleged incident – which Kudela denies – and demanded action from UEFA.

Hours earlier, Slavia Prague had asked police to investigate allegations a Rangers player carried out an assault in the tunnel at the Ibrox stadium, claiming Rangers’ manager and former England star Steven Gerrard was a witness.

Kamara, a black Finland international, said in his statement: “If UEFA genuinely wants to ‘show racism the red card’, then it’s time to stop the tokenism and take a zero-tolerance approach.

“As a player, I do not expect myself, nor any other, to have to tolerate racial hatred on or off the pitch in 2021.

More from Racism In Football

“The vile racist abuse by Ondrej Kedel [sic] took place on the international stage, and any failure to act by UEFA will be viewed as a green light for racism.”

UEFA has confirmed it will conduct an investigation.

Kamara was seen being held back by team-mates as he reacted with fury when Kudela came alongside him late in the game and cupped his hand before allegedly whispering a racist slur.

Gerrard and Rangers chairman Douglas Park were seen confronting the Slavia delegation after the full-time whistle.

Slavia say a Rangers player punched Kudela as the dispute spilled over when the teams left the pitch – a claim Rangers say has been made in order to deflect from the allegations of racism.

In a statement, the Czechs – who now will face Arsenal in the Europa League last eight – said: “Slavia Prague filed a criminal complaint with the Scottish Police through the Embassy of the Czech Republic in Great Britain for physically assaulting player Ondrej Kudela.

Micah Richards has called for certain racist words to be banned from use on social media.

Rangers have so far not responded directly to the Czech club’s allegations but managing director Stewart Robertson earlier released a statement insisting the club will object to any attempt to “deflect” away from alleged racial abuse aimed at Kamara.

Slavia were quick to deny Kamara’s claims, referring directly to the racist slur when they said Kudela had used other words than those that were claimed.

They then accused Rangers of “unprecedentedly malicious play” and “brutal tackles”.

The club continued: “Ondrej Kudela is one of the team captains elected in secret polls by the players who choose characters that enjoy their trust. He is a football gentleman and categorically denies and refutes any allegations of racism.

“We are shocked that his reputation and the club’s reputation are being smeared without a single piece of evidence. The only ‘alleged’ evidence is the player covering his mouth – which Ondrej does on a regular basis when he talks to his team-mates during our games.”

Kamara said in his statement that Slavia’s claim that Kudela used other words was “a complete utter lie”.

A Police Scotland spokesperson told Sky News: “No reports of criminality have been made by either club in connection with Thursday’s match.

Police Scotland has contacted club officials and assured them that should any allegation be received it will be investigated thoroughly.”

Anti-racism campaigner Shaun Campbell told Sky News that the punishments previously handed out by UEFA have offered no deterrent.

He cited the England vs Bulgaria game in 2019 which had to be stopped twice due to racist chanting in the stands and only led to Bulgaria being fined £65,000 and ordered to play two games behind closed doors.

“Had the right sanction been taken against Bulgaria” he said, “maybe the region would have got a very serious message about consequences – so we have to threaten to withdraw from those competitions.”

Mr Campbell who runs a foundation dedicated to Britain’s first professional black footballer said that home nation football associations need to stand up to UEFA and not be complicit in allowing racism to carry on in the game.