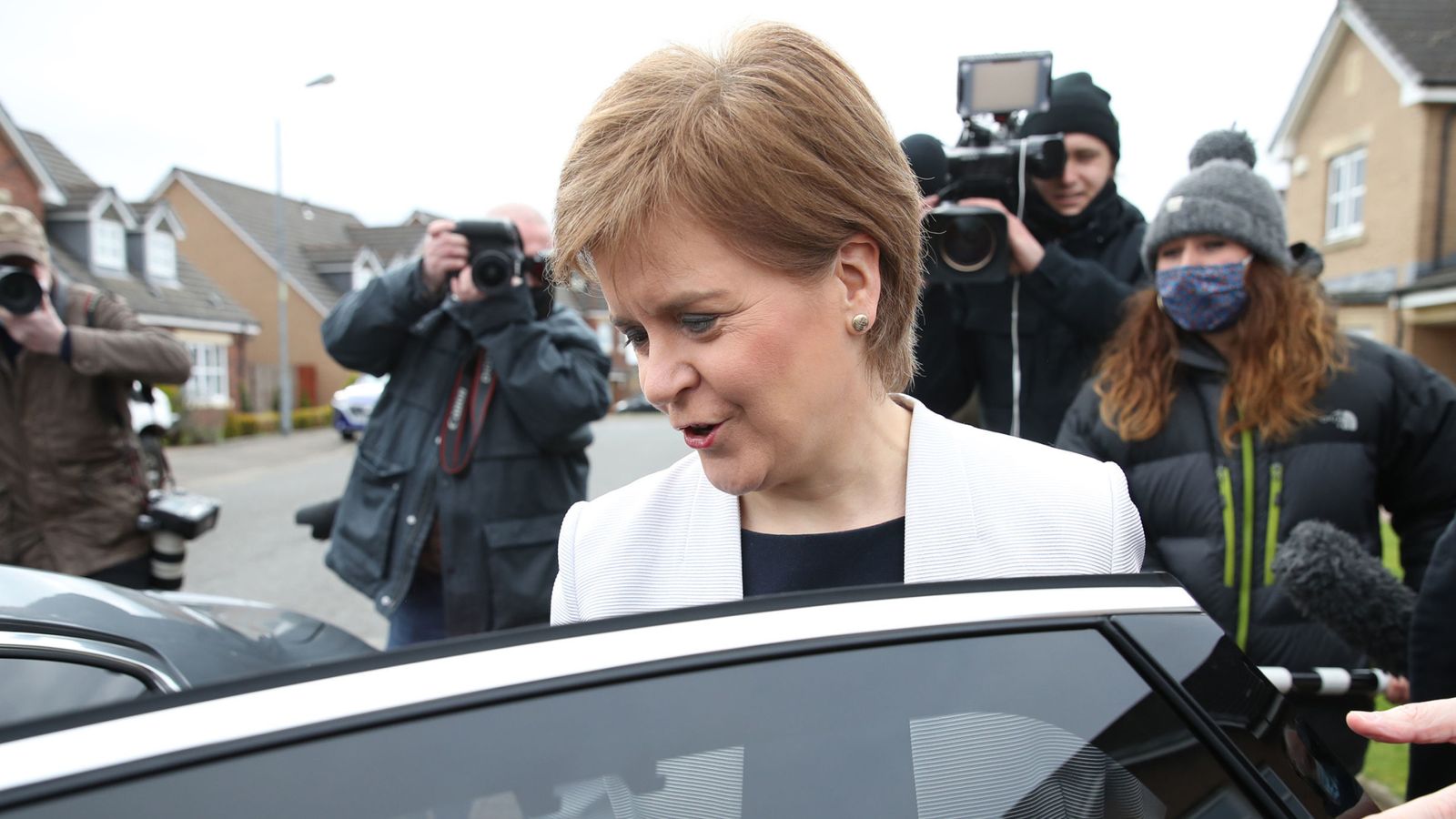 Nicola Sturgeon did not breach the ministerial code over her handling of the Alex Salmond harassment case, an independent investigation has found.

The finding was made by James Hamilton, the Scottish government’s independent adviser on ministerial standards.

Mr Hamilton, Ireland’s former director of public prosecutions, said in his report: “I am of the opinion that the First Minister did not breach the provisions of the ministerial code in respect of any of these matters.”

Image: Alex Salmond sued the Scottish government over its handling of harassment complaints against him

He had been asked to examine whether Scotland’s first minister “attempted to influence the conduct of the investigation” into Mr Salmond, her predecessor, and if Ms Sturgeon misled the Scottish Parliament.

Mr Hamilton also looked at whether Ms Sturgeon should have recorded calls and meetings with Mr Salmond.

The SNP leader referred herself for investigation by Mr Hamilton in January 2019 after Mr Salmond’s successful legal challenge of the Scottish government’s unlawful investigation into harassment complaints against him, which led to him being awarded £512,250 for legal costs.

Ms Sturgeon told reporters she was “delighted and relieved” to be cleared by the report, acknowledging “some pretty grim allegations have been levelled at me over the past months”.

The Scottish government had made a mistake in its handling of the accusations against Mr Salmond, she said, and “two women were let down as a result”.

The administration would, she said, try to “re-build trust and learn from its mistakes.

“I want, once again, to remind people that at the heart of this case were women who had the courage to come forward and complain,” she added.

Asked about a Scottish Parliament committee examining her government’s handling of the complaints against Mr Salmond, she said members had decided she was “guilty” before any evidence was heard.

The committee’s report is expected to find she was in breach when it is published on Tuesday.

In a statement, she said she welcomed the “comprehensive, evidence-based and unequivocal” conclusions.

“Mr Hamilton has considered all of the allegations against me, and I am happy that his report’s findings clear me of any breach of the ministerial code.

“I sought at every stage in this issue to act with integrity and in the public interest.”

She said: “As I have previously made clear, I did not consider that I had broken the code, but these findings are official, definitive and independent adjudication of that.

“Prior to its publication, opposition politicians stressed the importance of respecting and accepting the outcome of Mr Hamilton’s independent inquiry, and I committed wholeheartedly to doing so.

“Now that he has reported, it is incumbent on them to do likewise.”

In a statement, the Scottish Conservatives contended that Ms Sturgeon was not “free and clear”.

Their leader Douglas Ross said: “This report does not change the overwhelming evidence that Nicola Sturgeon misled Parliament, her government badly let women down and wasted more than £500,000 of taxpayers’ money.”

Mr Ross said a proposed vote of no confidence in Ms Sturgeon will go ahead on Tuesday, despite the Hamilton investigation’s report.

It will not be supported by the Scottish Greens, their co-leader Patrick Harvie said.

He accused Tory MSPs of having “no interest in establishing the truth” in what he described as their “ridiculous attempts to pursue a political scalp”.

Scottish Labour leader Anas Sarwar said the process “has deeply damaged public trust in our politics at a time of national crisis, and there are absolutely no winners today.

“At the heart of this are two women who have been badly let down by the government, and it remains the case that nobody has taken responsibility,” he added.

The investigation was paused in early 2019 to avoid prejudicing criminal proceedings brought against Mr Salmond, who was later acquitted of all 13 charges – including sexual assault, indecent assault and attempted rape – in March 2020 following a High Court trial.

Mr Hamilton’s inquiry was then delayed again by the coronavirus crisis, before resuming in August 2020.

The ministerial code is a set of rules about how ministers should conduct themselves.

The code says it is the first minister who is “the ultimate judge of the standards of behaviour expected of a minister” and the appropriate consequences for breaches.