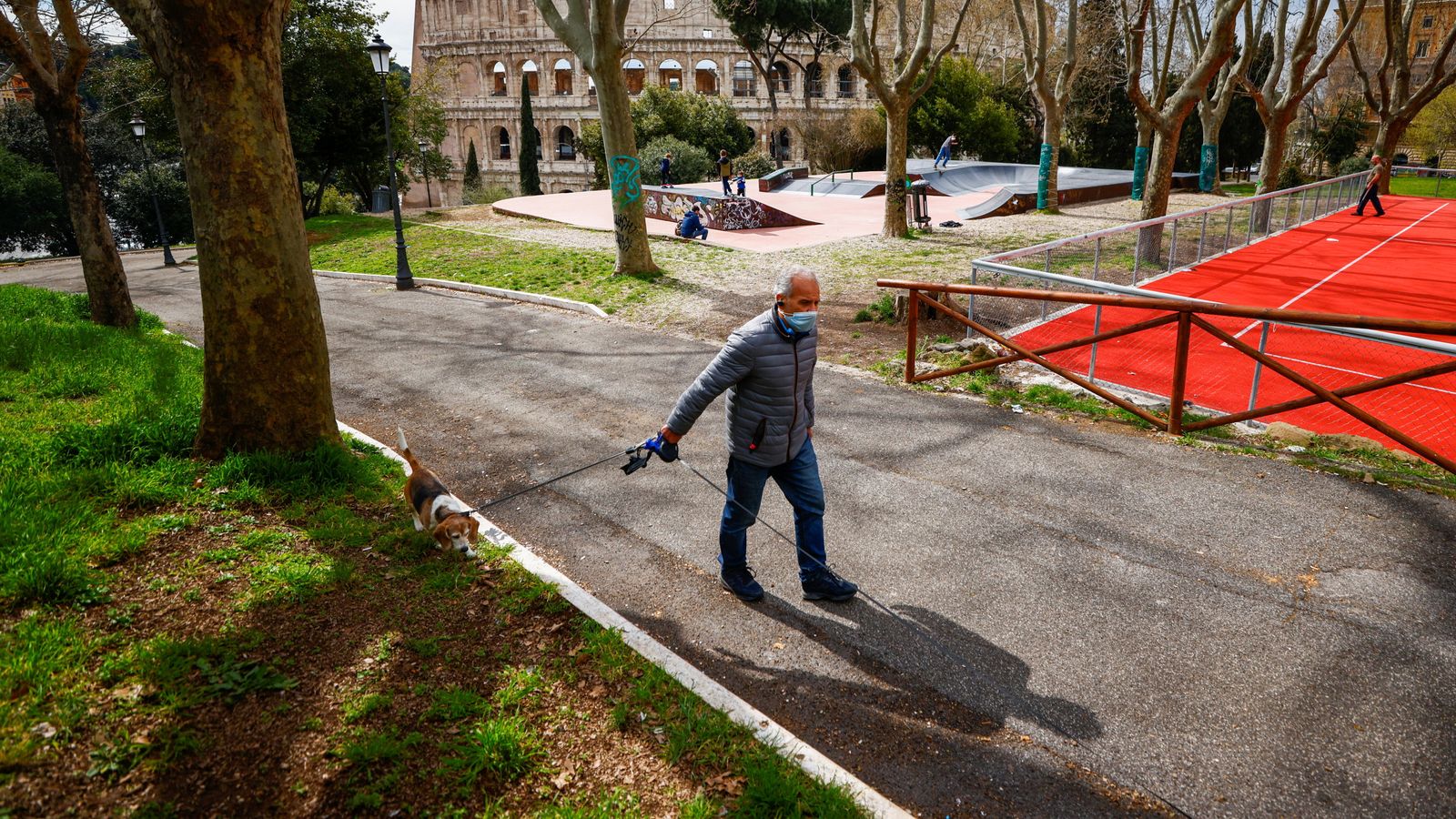 Boris Johnson has been “reassured” EU leaders “don’t want to see blockades” on the export of COVID vaccines – as he warned a third wave of infections in Europe would likely hit the UK as well.

Amid a dispute over a possible block on exports of coronavirus jabs to the UK, the prime minister said he had been “reassured by talking to EU partners over the last few months that they don’t want to see blockades”.

He stressed the UK was “on course” to vaccinate the top nine priority groups – including all over-50s – by 15 April, while the government would “bash on” with its roadmap for lifting lockdown restrictions over the next three months.

Image: More than half of Italy – including Rome – is back under lockdown restrictions following a rise in COVID cases

Mr Johnson said he had talked to EU leaders “repeatedly over the period”, adding: “We’re all facing the same pandemic, we all have the same problems.”

Addressing the vaccines row on a visit to Preston, Lancashire, on Monday, Mr Johnson also warned a recent surge in COVID cases across Europe would impact Britain.

“I think one thing worth stressing is that on the continent right now, you can see sadly there is a third wave under way,” he said.

“And people in this country should be under no illusions that previous experience has taught us that when a wave hits our friends, I’m afraid it washes up on our shores as well.

“I suspect we will feel those effects in due course, that’s why we’re getting on with our vaccination programme as fast as we can.

Image: The PM spoke to Angela Merkel and Emmanuel Macron on Sunday

Both France and Italy have recently been forced into new coronavirus restrictions amid a rise in cases and the slow rollout of vaccines across the EU – an issue that has heaped huge pressure on European Commission President Ursula von der Leyen.

EU leaders will hold a video conference on Thursday to discuss the bloc’s vaccine rollout and the fresh spike in cases in many member states.

Irish Prime Minister Micheal Martin on Monday described an EU export ban on COVID vaccines as a “retrograde step”, but he called on the UK to “reciprocate” on vaccines produced in Britain.

“The EU has played this straight and I think the UK needs to reciprocate in terms of vaccines manufactured in the UK, particularly AstraZeneca vaccines,” he told Irish radio.

“Stop the argy-bargy and get down to reality of the situation, which is that AZ vaccines manufactured in Europe had been facilitated to go to Britain.

“That needs to be acknowledged by the UK side and, in my view, reciprocated to some degree.”

Ms von der Leyen spoke at the weekend of the “possibility to forbid planned exports” of COVID vaccines, as she demanded AstraZeneca fulfil its delivery of doses to the bloc before delivering to other countries.

On Monday, the European Commission reiterated it was seeking “reciprocity and proportionality” in the export of vaccines.

“This is about making sure that companies deliver on their commitments to the member states and the EU that are inscribed in contracts that they have with us.

“Therefore this is our objective; to make sure the contracts that we have signed are respected.

“In that context, the president has said that, of course, we see that actually companies that manufacture doses in the EU have been exporting very widely, which is – in itself – a good thing, but that we want to see reciprocity and proportionality in these exports.

“This is our position. Therefore, it’s not about setting conditions for this or that, it is about making sure we are in a position to receive the vaccines that are foreseen for Europe.”

A factory in the Netherlands, run by AstraZeneca sub-contractor Halix, has become a focus of the EU-UK vaccine row as it is listed as a supplier in both the contracts the drugs giant has signed with Britain and the bloc.

The EU is reported to be fighting against vaccines from the Halix plant being sent to Britain, although the bloc has not yet approved the Leiden-based factory to produce jabs.

Ruud Dobber, AstraZeneca’s executive vice-president, said on Monday that EU approval was expected later this month or in early April.

Figures from the European Centre for Disease Prevention and Control show only 10% of adults in EU member states have had a first dose of a vaccine with a total of 54 million jabs having been given.

By comparison, in the UK, more than 52% of adults have had a jab with almost 30 million doses administered in total.

Polling for YouGov suggested confidence in the safety of the AstraZeneca vaccine had dropped in the last two weeks in Spain, Germany, France and Italy.

More than a dozen European countries recently suspended use of the vaccine over concerns about blood clots, although most have now resumed its use.

The European Medicines Agency and the World Health Organisation (WHO) have ruled that the AstraZeneca jab is safe and effective.

On Monday, new data from a US-led trial has shown the Oxford-AstraZeneca vaccine is 79% effective at preventing COVID-19 and offers 100% protection against severe disease.

Labour’s shadow home secretary Nick Thomas-Symonds accused the prime minister of being “complacent” about the threat of a third wave of COVID infections in Europe to the UK.

“It would not be inevitable if the government had listened to Labour and taken tougher action to protect our borders,” he said.

“It’s unacceptable that only one percent of international arrivals quarantine in a hotel. We need a comprehensive hotel quarantine system now, to help protect against a third wave and to safeguard the vaccine rollout.”