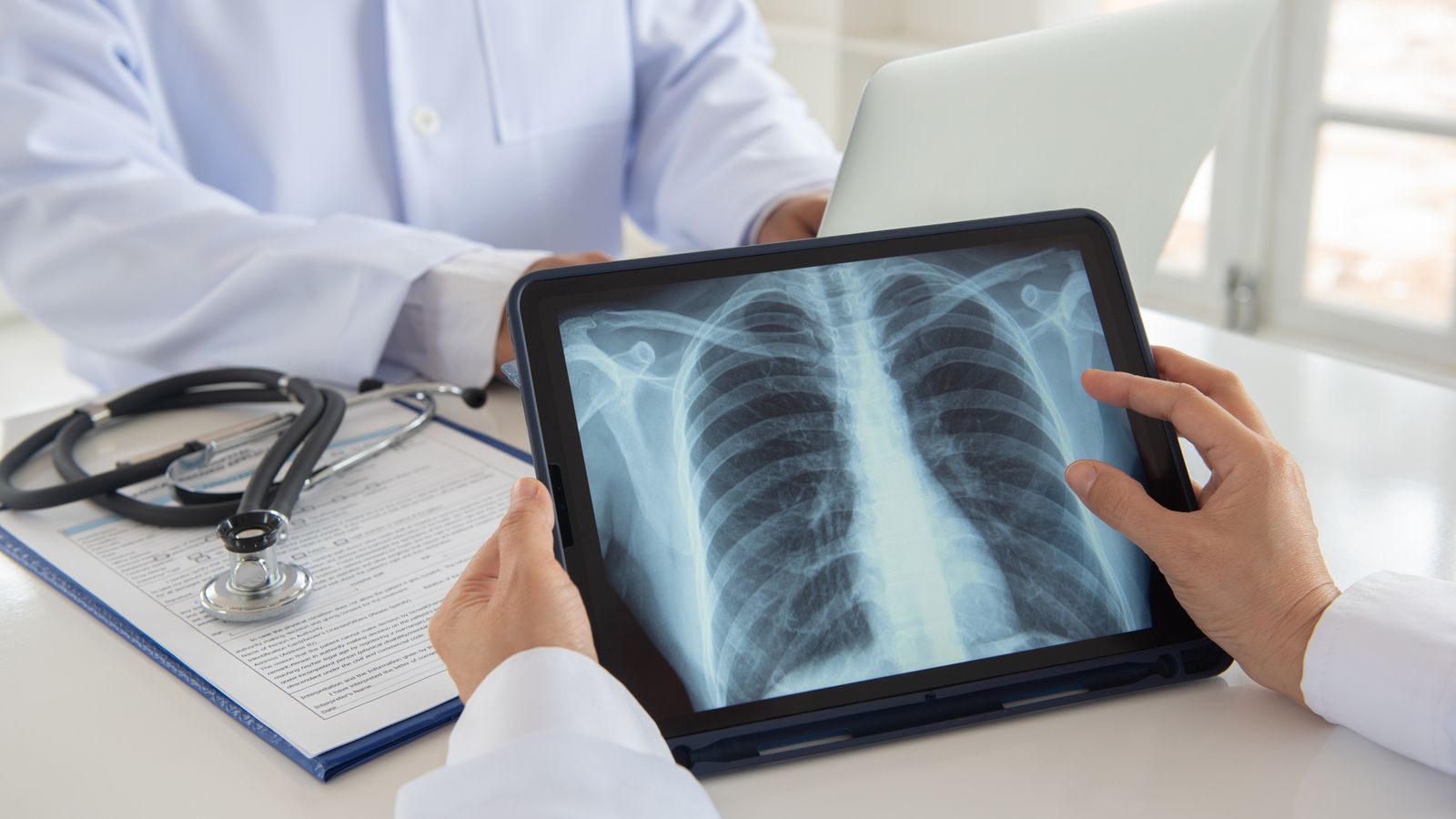 More than two-and-a-half thousand fewer people have begun treatment for lung cancer in England during the coronavirus pandemic.

And urgent referrals for suspected cases of the disease dropped by more than a third, Cancer Research UK said.

There are several reasons why people have been more reluctant to come forward, the charity added, observing that COVID-19 had brought a “perfect storm of problems”.

In a survey of 1,000 GPs across the UK in February, it found they were most concerned about people being reluctant to attend hospital for tests, with 91% citing that as a reason.

Patients with symptoms have not been seeking help, it has taken longer to process diagnostic tests, and it is more difficult to identify symptoms during remote consultations.

The turnaround time for coronavirus testing, prior to lung tests being carried out, has also contributed to delays.

Statistical analysis by the charity found about 20,300 fewer people were urgently referred for suspected lung cancer in England between March last year and January, compared to the same period the year before – a 34% drop.

Some 9% fewer people started treatment for the disease between April and January – the equivalent of 2,600 patients.

Lung cancer is more treatable if it is caught early, with 57% of people surviving for five years or more.

For those diagnosed at the latest stage, it is only 3%.

Image: Lung cancer is more treatable if it is caught early. File pic

Symptoms include a cough that lasts longer than three weeks, a change in a cough which has lasted for a while, and coughing up blood.

Dr Neil Smith, Cancer Research UK’s GP adviser, said it was “incredibly worrying” that fewer people had begun treatment for lung cancer since the start of the pandemic.

He added: “COVID-19 has created a perfect storm of problems, but the tide is turning as cases drop and vaccines are rolled out.

“Hospitals and surgeries have worked hard to make services as safe as possible, so it’s vital that people with symptoms contact their GP and attend any follow-on tests.”

“They must also continue public awareness campaigns to encourage people who notice any unusual changes to their body to contact their GP and reassure them that surgeries and hospitals are safe.”

Rebecca Davis, 35, an office worker from the Midlands, was diagnosed with adenocarcinoma ALK Positive lung cancer in August 2020.

She said: “As I’m a non-smoker and so young, the thought of it being cancer never crossed my mind. It was the last thing I suspected in the world and it’s very rare for my age.

“I’m glad I sought help and I would encourage anyone in my situation to do the same. Don’t leave it until it’s too late.

“I’m now having targeted therapy which is helping and I’m lucky there are more treatment options available to me.”