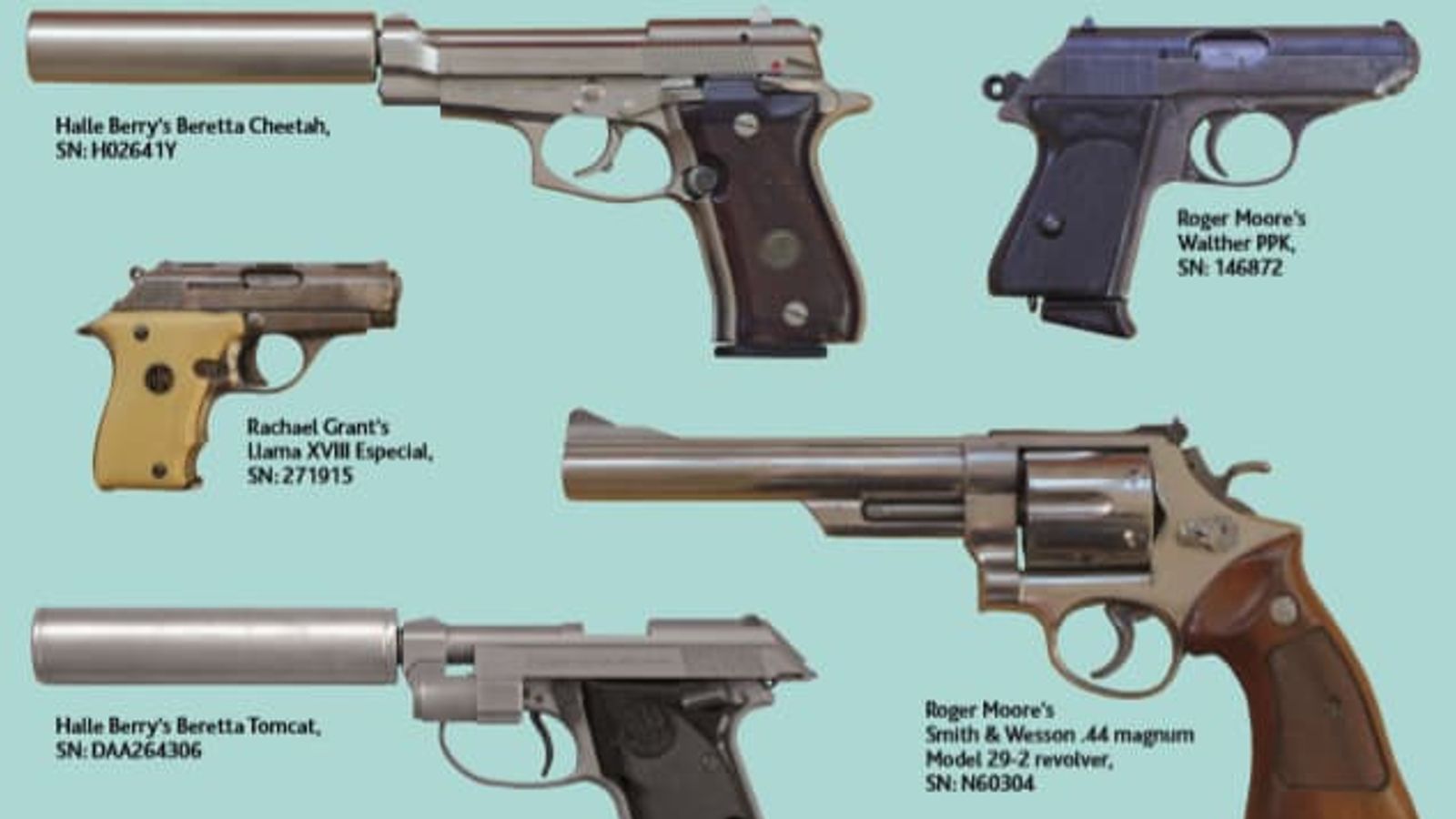 A fresh appeal has been made by police to find four deactivated guns used as props in James Bond movies, which were stolen in a burglary a year ago.

The memorabilia was taken from a property in Enfield, north London, on the evening of 23 March 2020.

Officers were called at 8pm to the address in Aldersbrook Avenue.

But the suspects fled the scene in a silver vehicle before police arrived, after being disturbed by neighbours.

Image: A Smith and Wesson revolver used in the film Live And Let Die was stolen in the burglary

The stolen guns were:

• A Smith and Wesson .44 Magnum revolver, serial number N60304, which featured in Live And Let Die

• A Beretta ‘Tomcat’ auto pistol, serial number DAA264306, which was in Die Another Day and has a laser/silencer attachment

A fifth gun – a Llama .22 calibre pistol, serial number 271915, which also featured in Die Another Day – was later recovered.

It was found by members of the public in a field near to Roydon railway station in Essex last April.

Image: A Beretta ‘Tomcat’ Auto pistol that appeared in Die Another Day is among the stolen guns

Detective Inspector Paul Ridley said they will almost certainly be recognised by the public if they are offered for sale.

He said the owner is “still completely devastated” and determined to see the return of the items.

The props were due to be showcased as part of a national exhibition.

The burglary suspects are described as three white males with eastern European accents. They were wearing dark clothing and face coverings.

Police have released CCTV which shows a vehicle prior to the raid parked on Aldersbrook Avenue.

It was a Vauxhall Miverna which appears to be silver.

DI Ridley said: “It has now been a year since the burglary and only one of the firearms has so far been recovered. Sadly this has been severely rusted due to being exposed to the elements outdoors and its integrity destroyed.

“We have released images of a vehicle that was parked near to the scene of the crime and appears to be carrying out reconnaissance in the area.

“In scenes reminiscent of a James Bond movie you can even see the flash of a camera from the occupant engaged in the surveillance. I believe these individuals were involved in the crime, it was only a matter of minutes prior to the raid.

“The firearms which were stolen are very distinctive and bespoke to particular James Bond movies, they will almost certainly be recognised by the public and any persons offered for sale.”

Image: The Llama gun was discovered by members of the public

He added: “Many of these items are very unique. For example, the Magnum is the only one in the world ever made where the whole gun is finished in chrome. It has a six and a half inch barrel and wood grips.

“The Walther PPK was the last gun used by Roger Moore in View to a Kill in a famous scene with Grace Jones who descends the Eiffel Tower on a parachute.”

Anyone with information that could assist the investigation is urged to contact North Area CID via 101, or by tweeting @MetCC quoting CAD 5890/23MAR20. Information can also be given anonymously to Crimestoppers on 0800 555 111.